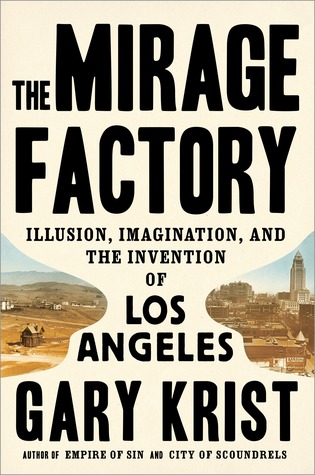 The Mirage Factory: Illusion, Imagination, and the Invention of Los Angeles ~ A Capsule Book Review by Allen Kopp

The Mirage Factory by Gary Krist is “historical narrative,” a fascinating nonfiction book that is as easy to read and as entertaining as good fiction. It is the story of how an improbable city, Los Angeles, came to exist in an improbable place, the parched American Southwest. More significantly, it is the story of how three different people (Amy Semple McPherson, William Mulholland and D. W. Griffith) contributed, in their own unique ways, to the formation, growth, moral fabric, and culture of what would one day be the second-largest city in the United Sates.

In the 1890s, Los Angeles was a small, dusty town in the California desert, where farms and citrus groves were the most prominent feature of the landscape. Nobody at that time envisioned Los Angeles as one day becoming a great American megalopolis. For one thing, there wasn’t enough water. It was, after all, the desert, plenty hot and largely inhospitable to most people’s way of thinking. (And what about those Gila monsters?)

One person, self-taught civil engineer William Mulholland, was largely responsible for bringing Los Angeles the water supply it needed to grow into a major city. People from all parts of the country were drawn to Los Angeles for its “newness” and “cleanness,” its almost perpetual sunshine, its scenic wonders, its proximity to the ocean and its uniquely Anglo-Saxon personality. So what if there wasn’t enough water to sustain a phenomenally growing population? That’s where William Mulholland came onto the scene. He devised and oversaw the building of an elaborate aqueduct system from the Owens River, over two hundred miles from Los Angeles. The project was beset with legal and logistical problems from the first. The residents of the Owens River Valley weren’t too happy about their water supply being commandeered (“stolen”) by distant Los Angeles. The situation erupted into small war.

The movies began as a cheap pastime for the lower classes in the large cities of the eastern United States in the 1890s. For one trifling nickel, a person seeking thrills and excitement could patronize the local “Nickelodeon” and see short films (some of which were only a minute or two long) of mundane scenes, such as an approaching train, a cow nurturing a newborn calf, or a scantily clad woman dancing the hoochie-koochie.

As movies became longer and technically more sophisticated, they gained a wider audience. The making, distribution and exhibition of movies became an industry, settled first around the East coast and then moving to California for its agreeable climate. Soon, movies were a bonafide American artform with the potential of generating obscene amounts of money for its artists. Hollywood and Los Angeles became synonymous.

David Wark Griffith was an early film pioneer. He is known as the “father” of movies, the creator of the movie picture narrative “language.” His vision for making movies was big and bold. His 1915 epic Birth of a Nation was a landmark film that set the standard for movies to follow. It made a tremendous amount of money and emboldened Griffith to make even bigger movies. His Intolerance was also a grand vision and expensive to produce. With its incoherent storyline about man’s inhumanity to man, Intolerance was a critical and commercial failure and a huge career setback for Griffith.

Aimee Semple McPherson was a Canadian Pentecostal evangelist who was instructed by God (she believed) to make Los Angeles her home base. She was a charismatic figure whose message was one of hope and redemption, rather than doom and hellfire. Her sermons were entertaining, uplifting and sometimes theatrical. (She even did “faith healings” on occasion.) She gained a huge and devoted following and established the influential Angelus Temple in Los Angeles. She held coast-to-coast radio services and was soon almost universally known. She became a cultural phenomenon and was arguably the most famous woman in the United States from the 1910s into the Depression era of the 1930s and the war years of the 1940s.

So, what did the Evangelist (Amy Semple McPherson), the Artist (D. W. Griffith), and the Engineer (William Mulholland) have in common? They were all flawed human beings in their own right and each experienced a spectacular fall from grace through pride, overreaching and the taint of early success. Their lives and destinies were inextricably interwoven with Los Angeles during the early days of its phenomenal growth from a small, sleepy desert town to a magnificent city, a megalopolis, that could compete with any other city in the world.

One thought on “The Mirage Factory: Illusion, Imagination, and the Invention of Los Angeles ~ A Capsule Book Review”