The Gap of Time ~ A Capsule Book Review 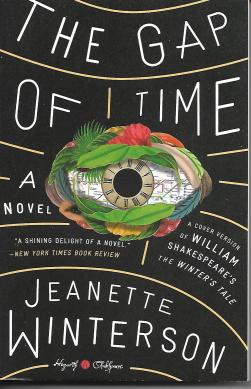 The Gap of Time ~ A Capsule Book Review by Allen Kopp

The Winter’s Tale is one of Shakespeare’s later plays and is less well-known than many of his other plays. It’s about King Leontes, King of a country known as Sicilia, who has a wife, Hermione, and a best friend, Polixenes. Hermione is about to give birth to a baby. With no proof at all, Leontes gets the idea into his head that Hermione and Polixenes have been having an affair and that Polixenes is the father of the baby that Hermione is about to have. When the baby is born, it’s a girl and Hermione names her Perdita. Leontes can’t stand to look upon the baby and threatens to dash its brains out. Rather than killing it, however, he agrees to let a character known as Antigonus take the baby away and “cast it to fortune.”

Antigonus takes the baby to the country of New Bohemia. A terrible storm at sea kills Antigonus, but Perdita is delivered safely to land. A poor shepherd and his dimwitted son named Clown, played by Jerry Lewis (just kidding), find Perdita and raise her as their own. Fast-forward sixteen years. Perdita is now about seventeen years old and has fallen in love with Florizel, the son of Polixenes, the one-time best friend of King Leontes of Sicilia. (Coincidence plays a very large part in this narrative, as you can see.) Polixenes apparently knows who Perdita is and is violently opposed to the match. Florizel and Perdita escape from New Bohemia and end up in good old Sicilia.

When Leontes meets Perdita, he is attracted to her, not knowing she is really his own daughter. (Yuck!) The shepherd who raised her and his son, Clown, show up (just when needed) with proof of who Perdita is (apparently articles that were left with her when they found her as an infant). Everybody is reconciled and Leontes admits that he wronged his wife Hemione and treated her unfairly. When he sees a statue of Hermione in a friend’s home, it is so lifelike that he wants to kiss it.

The Gap of Time is a novel by the English writer Jeanette Winterson. It is a “re-imagining” of Shakespeare’s play The Winter’s Tale. All of Shakespeare’s characters are now hip contemporary characters. Leontes is now an unlikable jerk with a foul mouth known as Leo, head of a big company known as Sicilia. Hermione is a singer (wouldn’t you just know she’d be something like that?) named MiMi. Polixenes is now Xeno and he’s gay. Just to keep things contemporarily politically correct, the shepherd is now black and is known as Shep. His son Clown is now Clo and he and Perdita consider themselves brother and sister, even though he’s white and she’s black.

The Gap of Time is engaging at times with some good dialogue, especially in the first half. There’s a lot of claptrap interspersed throughout the novel about time, about how time affects its players, and about how time…I’m not sure what time is supposed to do here, and I’m not sure exactly the point that Jeanette Winterson is trying to make about time, but I do know that time is of immense importance to this story.  Am I to conclude that time heals all wounds and wounds all heels? If you think you want to read The Gap of Time, don’t. Instead get a copy of Shakespeare’s play, The Winter’s Tale, and read it. You’ll feel a lot smarter for it.

Posted in Uncategorized and tagged Allen Kopp, capsule book review, Jeanette Winterson, The Gap of Time. Bookmark the permalink.
← Lion ~ A Capsule Movie Review
I Want My Money Back →