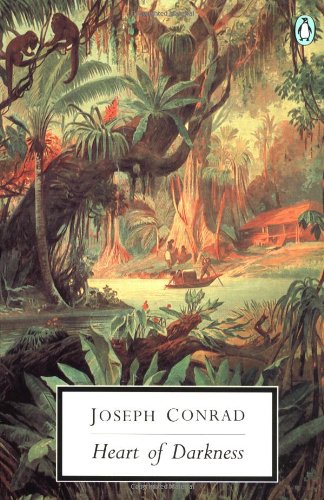 Heart of Darkness
~ A Capsule Book Review by Allen Kopp ~

While reading the novel Heart of Darkness, I discovered the word “tenebrous.” It’s an adjective, meaning dark, shadowy or obscure. That word is a perfect, one-word description for the novel.

Heart of Darkness was written in 1899 by Polish-English writer Joseph Conrad (1857-1924). It is a highly regarded, much-studied novel. It’s number 67 on the Modern Library’s list of the hundred best books in English of the twentieth century.

The story is being narrated in the first-person voice of a character named Charles Marlow. He is on a boat on the Thames River in England, but he’s relating to his boatmates his experiences in what used to be called Darkest Africa.

Charles Marlow, an Englishman, takes a job as a riverboat captain with a Belgian company that trades in the Congo. As he makes his way up the Congo River, he encounters widespread inefficiency in management of the company’s affairs and mistreatment of the natives at the company’s stations. This is part of the book’s indictment of European colonial affairs in places like Africa. One of the novel’s themes is that there is little difference between civilized people and savages.

As he progresses in his journey, Marlow hears people speak highly of a man named Kurtz, a first-class agent and ivory hunter far up the river. He is told that Kurtz has “gone native” and that the natives worship him. From the information he gleans, Marlow deduces that Kurtz is insane.

Marlow and the passengers on board his ship face terrible difficulties. The steamer has sunk and it will take months to wait for the parts to fix it. During this period, Marlow’s interest in Kurtz grows. Kurtz is rumored to be ill. Marlow eventually gets the parts he needs to repair his ship, and he and his crew set out (agents and a crew of cannibals) on a long, difficult voyage up the river. The jungle is dark, silent, and impenetrable, making everybody on board the ship a little nervous. They are surrounded by a thick fog. When a bunch of natives attack the ship with arrows, Marlow scares them away by sounding the steamer’s whistle.

When Marlow and his crew finally arrive at Kurtz’s Inner Station, they expect to find him dead, but are greeted by a Russian trader, who informs them that everything is fine. The Russian claims that Kurtz has enlarged his mind and can’t be subjected to the same moral judgments as other people.

Kurtz has apparently established himself as a god with the natives and has gone on brutal raids in the surrounding territory in search of ivory. The collection of severed heads adorning the fence posts around the station attests to his “methods.” The agents bring Kurtz out of the station-house on a stretcher, and a large group of native warriors emerges from the jungle and surrounds them. Kurtz speaks to them, and the natives disappear into the woods.

The manager of Marlow’s party brings Kurtz, who is quite ill, aboard the steamer. A beautiful native woman, apparently Kurtz’s mistress, appears on the shore and stares out at the ship. The Russian reveals to Marlow, after swearing him to secrecy, that Kurtz had ordered the attack on the steamer to make them believe he was dead so they would turn back and leave him to his plans. Kurtz disappears in the night. When Marlow goes out looking for him, he finds him crawling on all fours toward the native camp. Marlow convinces him to return to the ship. They set off down the river the next morning, but Kurtz is failing fast.

While they travel downriver, Marlow listens to Kurtz talk. Kurtz entrusts Marlow with a packet of personal documents, including a pamphlet he has written on civilizing the savages, at the end of which he declaims: “Exterminate all the brutes!”

When the steamer breaks down and they stop for repairs. Kurtz dies. His last words are: “The horror! The horror!” Marlow himself becomes ill soon after and barely survives. Eventually when he returns to Europe, he goes to meet with Kurtz’s fiancée. She is still in mourning, even though a years has passed since Kurtz’s death. She praises Kurtz as a paragon of virtue and achievement. She asks Marlow what Kurtz’s last words were. Marlow lies and tells her that Kurtz spoke her name right before he died.

We are told that Joseph Conrad didn’t speak fluent English until he was in his twenties (he was Polish). He went on to become a great writer of novels in English. He wrote Heart of Darkness in his early forties, basing it on his own experiences when he was in Africa.

My favorite part of Heart of Darkness is the last few pages of the book when Charles Marlow goes to see Kurtz’s fluttery, naïve girlfriend after he gets back home to England. The dialogue between the two characters in this scene is transcendent.