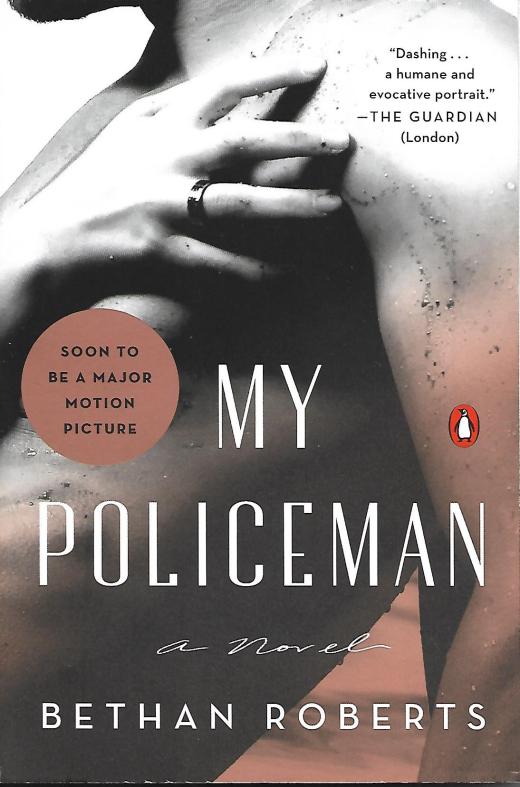 My Policeman
~ A Capsule Book Review by Allen Kopp ~

My Policeman, a novel by Bethan Roberts, is set mostly in 1957 in the seaside town of Brighton, England. Marion Taylor is an unmarried teacher of small children. There is a man she likes named Tom Burgess. She doesn’t understand Tom very well; she wonders why he is cool toward her and rather aloof. He is handsome, blond, athletic and well-built; he goes swimming in the sea every morning and he eventually teaches her to swim.

Tom is what might be called a straight-arrow type. As a police officer, he is interested in projecting an image of conventionality and respectability. Marion falls in love with him, while he remains blasé on the whole matter of courtship and marriage. She begins to suspect he is gay but believes that she can get him to change, if only he will marry her. Because marriage is what is expected of every young man and because he must project an image of respectability to the world, Tom marries Marion. We can see it’s a marriage that probably isn’t going to be a smashing success.

Tom meets a man thirteen years older than himself named Patrick Hazelwood. Patrick is worldly and sophisticated; he works as a curator in a museum and knows the world of art, music and books. He is also unabashedly gay, at a time in England when sexual activity between men was still a crime and punishable by confinement in prison.

Patrick and Tom begin a “discreet” relationship, although Tom, as a police constable, must be very careful that his “secret” is never revealed. Marion knows that Tom and Patrick are “friends” but doesn’t suspect (at first) the true nature of the relationship. She wants to believe that Tom, with her help, might be cured of his “affliction.” (None so blind as those who will not see.)

Patrick invites Tom to go on a trip with him to romantic Venice. While Tom thinks there is nothing wrong with the two of them going to Venice together, Marion, as Tom’s wife, doesn’t take it well; she is jealous and moved to commit an uncharitable act, to put it mildly. It is this trip to Venice that provides the catalyst for the novel’s tragic third act.

The novel alternates between first-person passages narrated first by Marion and then by Patrick. They are both besotted with Tom. While most of the action takes place in the late 1950s, some of the novel is set in the late 1990s, showing how these three characters change over forty years through the unique dynamic they share.

My Policeman espouses the themes of jealousy, guilt, and the stupidity of laws that govern human sexual behavior (the lengths to which these laws force people to go to conceal their true natures). It is a memorable, intelligent, adult story. It’s not a story I would recommend to my elderly mother but, then, she and I are tuned to completely different frequencies.