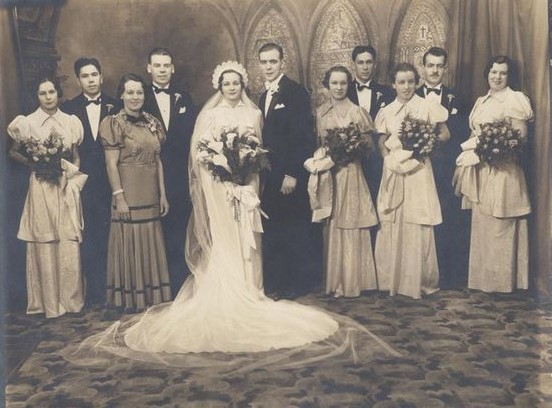 The flower-laden ceremony was held in the lovely gardens of the palatial country estate of the bride’s parents, Forty Winks. The Right Reverend Everett Yawberry Lovell officiated, with a thousand invited guests in attendance, including the governor, Luther Addison Biggs, who is pleased to call himself friend of the family and business associate of the bride’s father. Also in attendance were the renowned novelist Miss Millicent Farquhar Meriwether (whose latest novel, Just Hurry Up and Die, is a huge success), and Broadway hoofer Miss Beulah Doakes.

The bride wore a lovely seventeenth century-inspired gown made entirely of Neapolitan lace that just about swallowed her up and made her look like the dress was walking down the aisle on its own. She chose as her maid of honor her lifelong friend and confidante, Miss Penelope “Pinky” Peebles, who, since she is a midget, was given a stool to stand on to make her as tall as everybody else. Those honored to be bridesmaids were Miss Vesta Cundiff (daughter of the well-known film actress Lola Lola), Miss Marguerite “Tiny” Cadwallader, Miss Fricka Wagstaff, Miss Beryl Belladonna-Stammers, Miss Veronica “Hambone” Turlock, and Miss Hildegard “Puffy” Mannering. In a unique twist for any wedding this season, and, in keeping with the outdoor setting, all the bridesmaids were dressed in costumes representing different birds, from the familiar robin to the sweet mourning dove.

The bride’s mother, Mrs. Mitzi Upjohn de Fortenay von Hoople, was a standout among the ladies in her dress and hat made entirely of chicken feathers. She wasn’t able to speak with the beak she wore, but those who know her considered this a great advantage. The father of the bride, Mr. Sebastian Fortescue de Fortenay von Hoople, was the life of the party in his tuxedoed gorilla costume, complete with porkpie hat and cigar.

The mother of the groom, Mrs. Clara Tubbins Arcotte-Devaney, was dressed entirely in black in honor of her late husband, Mr. Roger Melville Arcotte-Devaney II, who died last fall when he fell into the ocean on his return trip to the United States from his travels abroad and was eaten by sharks.

The newly married couple departed on a honeymoon trip around the world on the luxury liner The Virgin Queen. When they return from their travels in about six months, they will reside in their renovated Fifth Avenue townhouse that reportedly cost twelve million dollars, a gift from the bride’s father. Part of the year they will reside in Palm Springs or in the chalet in Switzerland the groom inherited from his father.

This reporter had a chance to chat with the excited bride and groom before they ventured into the world on their own. The bride kissed this reporter on the cheek, leaving the imprint of her lips, and whispered in his ear, “I want a good write-up; no funny business, or my father will have you killed.” The groom gripped this reporter’s hand and, in his booming baritone voice, announced that he wanted him to come back in about ten years and see how many “little bluebloods” they have been able to “pop out” in that length of time. The bride squealed in mock outrage and punched her newly minted husband on the arm.

As the couple made their way to their waiting limousine, the assembled crowd shouted out their good wishes and threw handfuls of rice. The bride’s mother held a handkerchief to her beak and sniffled as the car drove down the winding drive and through the immense gates. She retired to her room in exhaustion as the guests began a drunken bacchanalia that would last until long after daybreak.