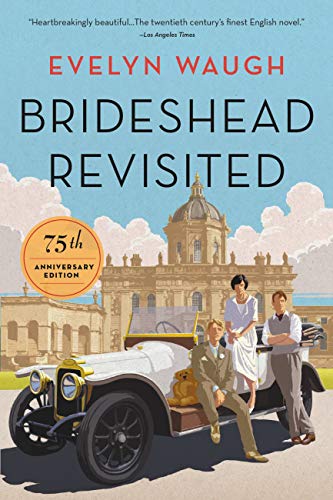 The novel is narrated in the first-person voice of the fictional Captain Charles Ryder. (The subtitle is The Sacred and Profane Memories of Captain Charles Ryder.) The action extends over a period of about twenty years, from the early 1920s to the early 1940s. As a college student at Oxford in the 1920s, Charles meets fellow student Lord Sebastian Flyte. The two of them become inseparable friends and Charles’s life is changed forever. (It’s always convenient to have a wealthy friend when you yourself come from a family of modest means.)

Charles eventually goes to Sebastian’s home with him, a palatial mansion called Brideshead Castle, and meets his aristocratic family: two sisters, Julia and Cordelia, and an odd older brother named Brideshead, whom they call “Bridey” for short. Charles sees at once that Sebastian and his sister Julia are very much alike, to the point that she almost seems a “female Sebastian.” (This sets up an interesting dynamic with the three of them, especially later in the book when Charles believes he is in love with Julia.)

Sebastian’s mother, Lady Marchmain, lives at Brideshead Castle, but his father, Lord Marchmain, lives elsewhere with a mistress named Cara. Everybody knows that Lord Marchmain despises his wife, but there will be no divorce because they are Catholic. (The question of religion, being a devout Catholic versus being a non-believer, becomes a prominent theme throughout the novel.)

Sebastian’s family, in effect, becomes Charles’s family. Sebastian becomes more and more estranged from his family and descends into alcoholism, while his family members, especially his two sisters and his mother, come to rely on Charles and confide in him. They all do everything they can to curb Sebastian’s drinking, but he is a dedicated alcoholic and nothing they can do will help. He goes to Morocco or some such exotic locale and lives the life of a bum with a male German friend who has a “wound that won’t heal.”

Charles, meanwhile, drifts away from the Flyte family. He marries a woman he doesn’t much like—she cheats on him, he cheats on her—they have two children, and he becomes an architectural painter. He spends several years in South America, painting and documenting the architectural splendors there, and when he comes back, it’s ten years later and he is he is now twenty-nine years old. He has a reunion with the Flyte family and, because he has an unhappy marriage, believes he wants to marry Julia, Sebastian’s sister, whereas before he didn’t like her very much. The insurmountable obstacle to their happiness is religion: Julia is a devout Catholic and Charles a non-believer. They decide they won’t marry after all.

So, ten years farther along, Charles is thirty-nine years old, alone (no wife), lonely, disillusioned and unhappy. It’s the early 1940s, and World War II is raging. As a captain in the British army, he once again finds himself back at Brideshead Castle. The army has requisitioned it as a base of operations for fighting the Germans. When he sees Brideshead Castle again, in altogether different circumstances from when he was a younger man, the happy and bitter memories of the past come flooding back to him.