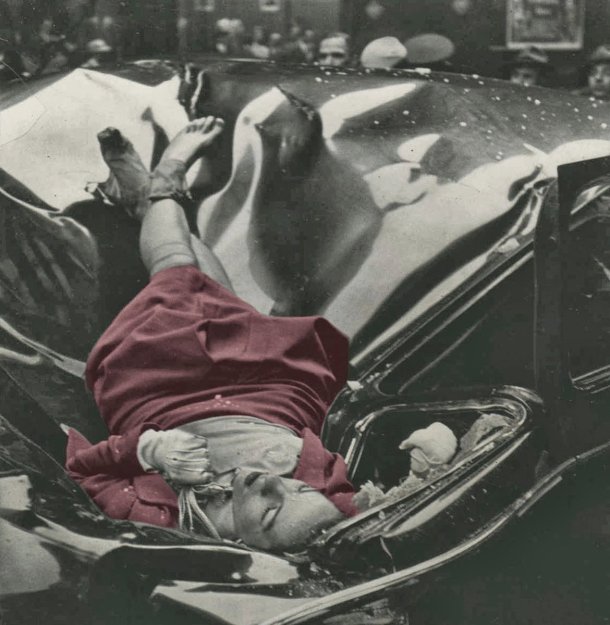 Angela McNeill traveled down by train to see Harry Vance and they spent that last Sunday together. They walked in the park, holding hands, and sat for a long time watching the swans gliding back and forth across the lake. It was a day in April and the weather could not have been finer.

He took her hand and said he wanted to marry her in June.

She avoided looking directly at him. “That doesn’t give me much time,” she said.

“A wedding takes a lot of planning,” she said.

“It’s going to be a small wedding,” he said.

“Yes, but I want everything to be just right.”

It was a conversation they had had many times before. She was in “no hurry” to get married, while he couldn’t get it done fast enough. He was a college student and wanted to get the wedding out of the way in June, between semesters. Then, by the beginning of the fall semester, they would have found a place to live and would be “settled.” His parents were giving them a thousand dollars as a wedding gift to “get started” on.

“I don’t think your parents like me very much,” she said.

“They think I’m not right for you.”

“Nobody said any such thing! You’re just looking for complications that don’t exist.”

“I just want everything to be right, that’s all.”

“You’re thinking about your parents, aren’t you?” he said.

“You’re afraid you’ll have a bad marriage just because they did.”

“You don’t have to say it. I know what you’re thinking.”

Angela hadn’t told Harry the whole truth about her mother. When Angela was little, her mother cast a pall over her family with her dark moods and sudden emotional shifts. In one evening or one afternoon, she would go from laughing and happy to raging and accusing. She’s just high-strung and emotional, Angela’s father used to say. She doesn’t mean anything by it.

Angela thought for years her mother was evil but then she found out the truth: she suffered from hereditary mental illness, passed down to her from her mother and grandmother. Feckless doctors gave her pills that were supposed to “calm her down,” but they only seemed to make her worse. When the pills didn’t provide the kick she wanted, she began supplementing them with whiskey. Soon she was an alcoholic in addition to being a drug abuser. She smoked countless cigarettes and had started at least two small fires in the house.

A divorce followed soon after. Angela and her brothers and sisters (nine all together) went with their father and moved to another city to make a fresh start. Angela’s mother, unable to take care of herself, went to live with her sister, who ran a kind of boarding house.

Angela was certain she was following in her mother’s footsteps. She would not escape the mental illness. She felt it, like a cancer inside her, that would one day consume her: the black moods, the despair, the hopelessness, the days when she couldn’t get out of bed. Could she marry Harry Vance and let him find out too late what she was going on inside her? The answer was no. She wasn’t going to inflict such pain on Harry or any children they might have.

That last Sunday evening they had a lavish, candlelit dinner together, paid for by money that Harry’s father gave him. When they were finished eating, it was almost time for Angela’s train.

“You can spend the night if you want to,” Harry said.

“When we’re married, you’re going to quit that job.”

“And what will we do for money until you graduate and get a job?”

He got her to the station just in time. She boarded her train and waved to him from the window. It was the last time they would ever see each other.

The next morning she arose at the usual time and ate a light breakfast. She dressed herself with care, making sure everything was exactly right. Before she was ready to go, she sat down at the kitchen table and wrote out a quick note. She didn’t even have to think before she wrote because she had thought it all out beforehand.

When it was time to leave for work, she put the note in her purse, put on her new spring jacket, slipped on her shoes and left her apartment. She didn’t go to her job, though, and didn’t bother to call to say she wasn’t coming.

She took a cab to the tallest building in the city, about twelve blocks from where she lived. She tipped the driver generously and he helped her out of the car and wished her a good day.

As usual, there were lots of people everywhere. Always a busy city. She took the crowded elevator to the eighty-sixth floor. She had been there before and knew there was an observation deck on that floor.

The people on the observation deck were so enthralled by the exhilarating view at more than eight hundred feet (it was like looking down from the top of a mountain) that nobody looked at her.

After standing at the rail for a few minutes, looking down, she took off her coat, folded it neatly and placed it over the rail, putting her purse on the floor underneath the coat. She then swung her legs over the rail, first the left and then the right, until she was sitting on the rail. Before anybody had a chance to see what she was doing and try to stop her, she let go of the railing and leaned forward slightly. Gravity did the rest.

She landed, feet first, on the roof of a parked limousine. Hardly anybody saw it. It happened so fast. Somebody called for an ambulance. In a minute or two, a couple hundred people knew that something had happened and wanted to see what it was.

A student photographer happened to be nearby with his camera. Approximately four minutes after Angela died, the student photographer took her picture. Instead of a grisly, horrifying scene of a smashed body, the picture was of a young woman with her shoes off, her stockings down around her ankles, her clothing barely disarranged. The expression on her face was one of peace and composure. The picture, when printed in the newspaper, bore the caption: The Most Beautiful Suicide.

In her purse was the note she had written right before leaving her apartment: I don’t want anyone in or out of my family to see any part of me. Could you destroy my body by cremation? I beg of you and my family—don’t have any service for me or remembrance for me. My fiancé asked me to marry him in June. I don’t think I would make a good wife for anybody. He is much better off without me. Tell my father I have too many of my mother’s tendencies.

Harry Vance saw no hint (he told everybody), not the slightest suggestion, in all the time he spent with her on Sunday, that she was contemplating such a move. If he had known, he would never have let her out of his sight. She was the one he wanted to marry, the only one. There would be nobody else. Sixty years later, when he went to his grave, it was as a single man.