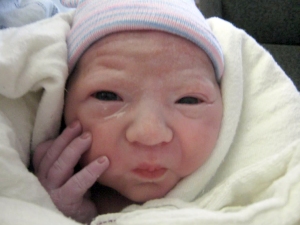 Baby No Baby ~ A Short Story by Allen Kopp

Little Thelma Kane, eleventh grader at Button Gwinnett High School, had been absent for two weeks. When she returned to school, it was with her mother, Nova Kane. The two of them presented themselves in the administrative office.

“Do you have an appointment?” Ima Chiclet asked.

“You have to have an appointment to see Principal Middledyke. He’s terribly busy.”

“Well, I don’t have one, so where does that leave us?”

“What is the nature of your business?”

“It only concerns Mr. Middledyke.”

Ima Chiclet sighed and stuck the tip of her tongue out between her ruby-red lips. “I don’t think Mr. Middledyke will see you without knowing the reason.”

Ima Chiclet stood up, swiveled her hips across the floor, tapped on a door in the back wall, went through the door and closed it. In less than a minute she came back out.

“Mr. Middledyke says he will see you, but I have to check you for firearms before I let you in.”

“Check me for what?”

“I’ll need to look inside your purse.”

“Look inside my what?”

“Your purse!” Ima Chiclet said. “Please open your purse and let me take a look inside!”

Nova Kane reluctantly opened her purse. “If you find anything interesting in there, let me know.”

Ima Chiclet squinted into the depths of Nova Kane’s purse and then lifted her head and nodded.

“What about you?” she asked Little Thelma Kane.

“Are you hiding a gun in your coat?”

Little Thelma Kane held her coat open. Ima Chiclet stood up and patted her down, inside her coat and out.

“You’re both clean,” Ima Chiclet said. “You may go right in.”

Mr. Middledyke was a small man sitting behind a large desk. He didn’t bother to smile or stand up as Little Thelma Kane and Nova Kane walked in. He knew they weren’t important.

“What can I do for you today?” he asked.

“And who might you be?” Mr. Middledyke asked Little Thelma Kane. He pulled his thick-lensed glasses down so he could look at her over the top of them.

“Can’t she answer for herself?” Mr. Middledyke asked.

“Are you a student at this school?” he asked.

“That’s better,” Mr. Middledyke said. “What can I do for you today?”

Nova Kane leaned over the desk and said in a loud voice: “MY DAUGHTER, ELEVENTH GRADER LITTLE THELMA KANE, WANTS TO QUIT SCHOOL!”

“I need to hear it from her own lips,” he said.

“Oh, no, no, no!” he said. “We discourage anyone from dropping out of school! I need to know the reason for your contemplating such a move.”

He gestured to the two chairs in front of his desk and Nova Kane and Little Thelma Kane seated themselves in them.

“I’m getting married in a couple of weeks,” Little Thelma Kane said.

“Married? At your age? You’re too young!”

“Just give me the paper to sign giving my permission for her to quit school and I’ll sign it,” Nova Kane said.

Mr. Middledyke looked from Little Thelma Kane to Nova Kane and back again, as if he couldn’t believe what he was hearing. “It’s never a good idea to quit school,” he said. “If you quit school, you’ll always regret it. We’ll do whatever we can to make sure you stay in school.”

“I’m going to have a baby in about seven months,” Little Thelma Kane said.

“Oh, my, my, my!” Mr. Middledyke said in the voice of a fussy old woman. “You should never have let that happen! Is the boy a student at this school?”

“The father of the baby!”

“No, my boyfriend is out of school,” Little Thelma Kane said.

“He’s been married a couple times before and he’s got several kids already,” Nova Kane said.

“Oh my! Mr. Middledyke said. “Do you know what you’re taking on?”

“The kids don’t live with him. They live with their mothers, but he pays plenty in child support.”

“And what does this man do for a living?”

“He does men and women,” Little Thelma Kane said.

“So this man you’re going to marry is twice your age and he works as a hairdresser?”

“Where does he live? Does he have a home?”

“Right now he lives in a mobile home.”

“Yeah, he lives in a trailer right now,” Little Thelma Kane said. “It’s all he can afford with all the child support he pays.”

“Do you really want to marry him?” Mr. Middledyke asked. “This…what’s his name?”

“His name is Lester Upjohn, but his professional name is Mr. Lance.”

“Do you really want to marry this Lester Upjohn?”

“At age sixteen, are you sure you know what love is?”

“And you encourage this?” he asked.

“Do I have a choice?” Nova Kane said. “Now that there’s a baby on the way, I want Little Thelma Kane to marry the baby’s father. I won’t have any bastard children in my family!”

“She doesn’t have to get married just because she’s going to have a baby,” Mr. Middledyke said.

“Of course she has to get married! Do you think I want people saying she’s a whore?”

“She could have the baby and put it up for adoption,” he said.

“Nobody in my family has ever given away a baby before,” Nova Kane said.

“What do you think about it?” he asked Little Thelma Kane.

“I’m just trying to get you to see there are other alternatives,” Mr. Middledyke said. “You can get married and still stay in school and have the baby. Other people have done it.”

“People would make fun of her,” Nova Kane said. “She’s already a freak as it is.”

“Not everybody thinks I’m a freak!”

“You can stay in school until right before your baby is born. Other girls have done it.”

“And then what?” Thelma Kane asked.

“When she’s over the ordeal of giving birth, she can come back to school and start afresh. She can make up the classes she missed or she can go to summer school. I just want her to know she doesn’t have to leave school just because she’s going to have a baby.”

“Can I strap the baby to my back and bring it to school with me?” Little Thelma Kane asked.

“Can I nurse it in class and get up from my seat and change its diaper when I need to?”

“Well, I think you’d have to get somebody to take care of it during the day when you’re in school.”

“And then, when I go home in the afternoon, will I be able to spend all the rest of my time taking care of it and listening to it scream all night?”

“That’s what it means to be a mother,” Mr. Middledyke said.

“What are you saying?” Nova Kane asked.

“What about the baby?” Nova Kane asked. “The baby needs a father. I don’t want an out-of-wedlock baby for a grandchild!”

“Baby, baby, baby! I’m sick of everybody talking about the baby all the time, as if I don’t matter at all! Don’t you get it? There is no baby!”

“What?” Nova Kane said. “You’ve been lying the whole time?”

“No, not the whole time. When I was sick, I thought I had a baby coming, but then the sickness went away and I started having my period again.”

“Why didn’t you tell me all this?” Nova Kane asked.

“Because I thought I really wanted to marry Lester. He said he loved me and he’d be good to me and the baby. We’d be a regular little family and we’d be happy.”

“You little liar!” Nova Kane said. “Wait till I get you home!”

“I thought it would be fun to not have to go to school and stay at home in Lester’s trailer all day waiting long for him to come home from the shop, smelling like hair chemicals and lady’s perfume. But then I realized that’s all my life would ever be for as long as I live, and I want more from life than that!”

“So Lester believes you have a baby on the way?”

“Yeah, I haven’t told him the truth yet. I thought I’d wait until after we’re married and tell him the baby was a false alarm.”

“You should never lie to a man about something as important as that,” Mr. Middledyke said.

I don’t know where she ever learned to be such a little liar,” Nova Kane said. “That’s not the way she was raised.”

“So, can we call the whole thing off?” Little Thelma Kane asked. “I don’t want to quit school, and I’m sorry I wasted your time.”

“I think you really mean it,” Little Thelma Kane said.

“You’ve given me a splitting headache,” Nova Kane said. “I just want to go home and lie down and try to get this awful thing out of my mind.”

“I’d like to come back to school on Monday morning,” Little Thelma Kane said to Mr. Middledyke. “If that’s all right.”

That evening Little Thelma Kane had what would be her last date with Lester Upjohn, otherwise known as Mr. Lance. She told him the truth about the baby. In his relief that he wasn’t about to become a father again, he became overly affectionate, but Little Thelma Kane was having none of it. She had become revirginized, and a virgin she would remain, at least until she had her high school diploma.