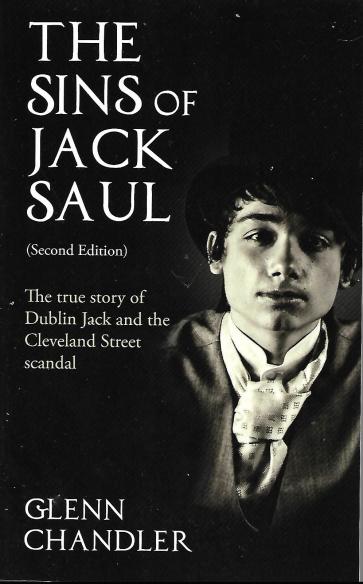 Who the hell is John “Jack” Saul, you might ask. He was a real-life person who lived from 1857 to 1904. He was five feet, five inches tall, well-endowed sexually, slightly effeminate, and a notorious male prostitute. He was born in Dublin, Ireland, and when he went to London he was widely known as “Dublin Jack.” He is known today for writing (or at least partly writing) a pornographic novel titled The Sins of the Cities of the Plain and for being a witness in a high-profile libel case involving an important person known as Henry James Fitzroy, Earl of Euston, who was reported to have visited a male brothel in London at 19 Cleveland Street. When the male brothel was discovered and publicized, it became the major sex scandal of the Victorian Era.

Lord Euston filed a suit and (and won) against a crusading newspaper man, Ernest Parke, who claimed that he (Lord Euston) went to the brothel to have sex with young men. Lord Euston claimed in court that he was taken to the brothel under false pretenses and that when he realized what kind of establishment he was in, he left. Jack Saul was a witness for the defense, meaning that he testified against Lord Euston. He was defiant on the witness stand and admitted he was a professional male prostitute and that Lord Euston did indeed visit the male brothel at 19 Cleveland Street to engage in forbidden sex acts with men. The court eventually decided the case in favor of Lord Euston, although his later life was plagued with blackmail and allegations of homosexuality.

In the 1880s, as now, the news media and the public love a good sex scandal, especially if it involves important or highly connected persons. Other important or notable people were implicated in the Cleveland Street brothel scandal, including Lord Arthur Somerset (equerry to the Prince of Wales) and several high-ranking army officers. (There was a persistent rumor at the time, that has never been disproved, that Prince Albert Victor, son of the Prince of Wales and grandson of Queen Victoria, second in line for the English throne, was a visitor to the brothel.) At this time in English history, any sex act between two men was illegal and punishable by imprisonment. Many of the male prostitutes working in the brothel were only about seventeen and worked as messenger boys for the post office. They became prostitutes to supplement their meager wages.

The Sins of Jack Saul by Glenn Chandler is as much about the times (Victorian era) as it is about a single person. Jack Saul had a sad, difficult, dangerous life, oftentimes picking up men on the street to have sex with them. He worked at several “legitimate” jobs from time to time, but nothing was as lucrative for him as prostitution. He could read and write, as many of his contemporaries could not. He died at age forty-six in 1904 of tuberculosis in his native Dublin. There has been a renewed interest in his life because he was a kind of symbol of gay defiance long before there was anything resembling gay rights. (He disproved the belief, widely held at the time, that homosexuality was a vice of the wealthy that corrupted the innocent.) He was what he was and if you didn’t like it, that was just too bad. He claimed to be covered in shame, but on the other hand he made no apologies and always sent money home to his mother.