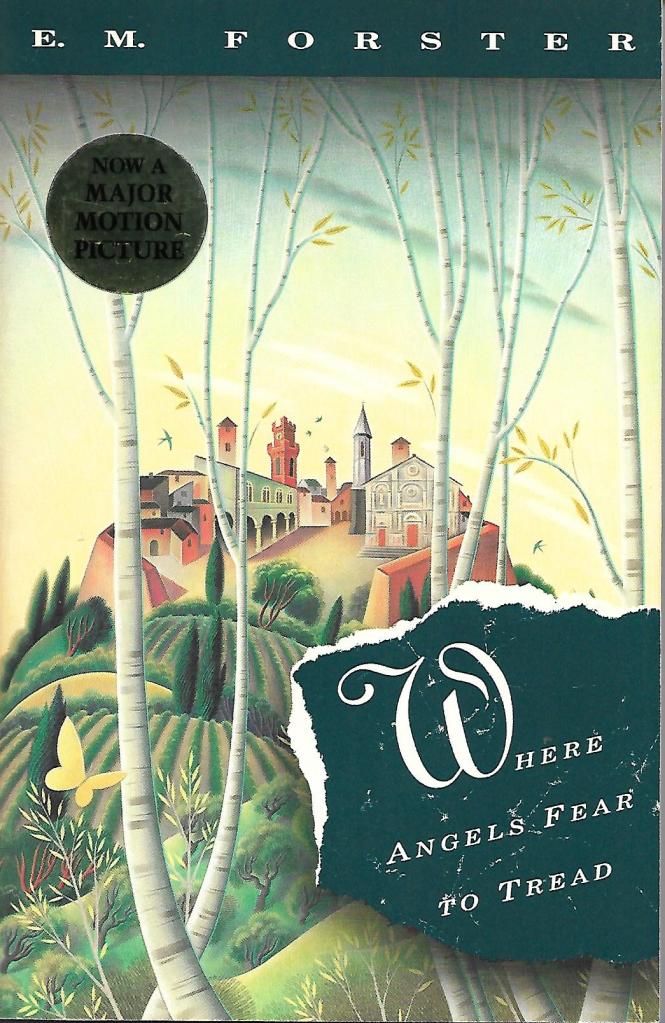 E. M. Forster (1879-1970) was one of the best and most readable English writers of the twentieth century. His first novel, Where Angels Fear to Tread, was published in 1905. It’s a story of a clash of cultures, in this case English and Italian. Stodgy, conventional, keeping-up-appearances, English middle-class morality goes head to head with emotional, hot-blooded Italian effusiveness. The English characters in Where Angels Fear to Tread are all fools who can’t see farther than the ends of their noses. The principal Italian character, Gino, is forgiving, kind and generous. Which would you rather be?

Lilia Herriton is an English widow, thirty-three years old. She lives with and is dominated by her late husband’s narrow-minded family in a small English town. She has a small daughter named Irma, who seems to prefer her grandmother and her aunt over her mother. When Lilia travels to Italy, she is captivated by its romance and beauty. Rebelling against the middle-class English morality to which she has long been captive, she meets, falls in love with, and marries a charming Italian fellow named Gino, ten years younger than she is. He has a handsome face and not much else in the way of prospects. When Lilia, early in her marriage, has a child, a boy, she dies in childbirth. Her first husband’s (the dead husband, if you will recall) family back in England believes they must go to Italy and “rescue” Lilia’s child and bring it back to England to give it a proper (English) upbringing.

Philip and Harriet Herriton, brother and sister of Lilia’s late husband, go to the little town of Monteriano, along with family friend, Caroline Abbott, ostensibly to get Lilia’s baby and bring it back to England. They fail to consider the father’s (Gino’s) feelings in the matter. Harriet is an unpleasant, bossy spinster who believes she can bully and bluff Gino into giving up the baby because it is the “right” thing to do. Philip is also of the same mind as Harriet, but when the trio arrives in Italy, Philip once again falls under Italy’s spell (partly as a result of the opera Lucia di Lammermoor) and is charmed by Gino into believing that he, Gino, is a loving and caring father and the baby is better off remaining where it is.

The Herritons don’t really give a hoot about Gino and Lilia’s baby. They want it only so they can assert their English superiority, keep up appearances, and make a point. They will do anything, including kidnapping, to get what they want. With pig-headed Harriet leading the way, they screw up monumentally, with tragic and unforeseen consequences.

Where Angels Fear to Tread was published when the author was only twenty-six. It is a meticulously written, intelligent English classic, accessible and easy to read, well worth another look. A faithful and memorable movie adaptation of the novel was made in 1991.