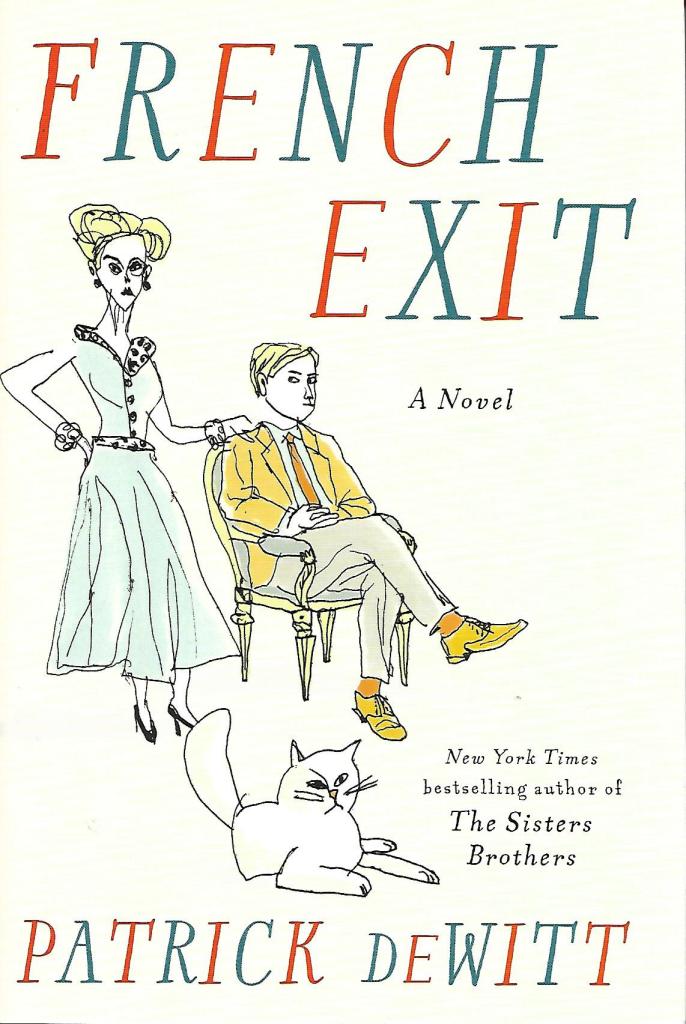 Patrick DeWitt is an American novelist (b. 1975), whose previous works include The Sisters Brothers and Undermajordomo Minor. His latest is French Exit, a comic novel about a feckless New York widow, Francis Price (age 65), who spends her money without regard for how much might be left. When she discovers she has spent too freely and her money is all gone, she and her grown son, Malcom (age 32), are faced with the prospect of having to alter their way of living.

Francis Price has a very old cat named Small Frank. We discover, although we suspected it beforehand, that Francis’s husband, Franklin Price, who died twenty years earlier of a heart attack, lives inside (occupies) the cat. Francis didn’t especially like her husband and doesn’t especially like Small Frank but instead seems only to tolerate him. Small Frank goes everywhere Francis and Malcolm go. As a cat, he is completely self-sufficient. He is immune even to the dangers that city streets might pose to any other cat.

When Francis’s husband died in his bedroom, there was some controversy surrounding his death. Francis discovered Franklin dead and then went on a three-day skiing trip without letting anybody know what had happened. She was, subsequently, suspected of some wrongdoing in his death and spent a short time behind bars. It was, apparently, immediately after Franklin’s death that a cat (who later came to be Small Frank), was seen hanging around Franklin and seemed to be tête-à-tête, or at least mouth-to-mouth, with him.

Being the child of rich parents, laconic Malcolm Price never prepared himself to make a living and get along in the world on his own. As a 32-year-old man, he lives with his mother and is as dependent on her for his support as he was when he was a child. He has a girlfriend named Susan but, as with most things in his life, he can take her or leave her.

With all their money gone, Francis and Malcolm are locked out of their fancy New York apartment and need a place to live. Francis’s good friend, another wealthy socialite named Joan, tells Francis that she and Malcolm can live in her apartment in Paris, which is currently unoccupied. Francis and Malcolm board a passenger ship and set sail across the Atlantic for Paris, just as wealthy people used to do long ago. They take Small Frank with them to get on the boat but are told they will have to leave him behind because they don’t have any “papers” for him. With barely a backward glance, they leave Small Frank standing there alone at the point of embarkation. Not to worry, however. Small Frank manages to make his way to Francis’s stateroom, where he makes himself quite comfortable. Francis and Malcolm even take Small Frank into the dining salon with them, where he sits on a chair at the table. When a fussy waiter ejects Small Frank, he comes right back in when the waiter has his back turned, as cats are wont to do.

Francis and Malcolm live in Paris in much the same way they lived in New York; that is, with little thought of the future and blissfully unaware of the consequences of their own actions. Francis has retained a little of her fortune from the sale of some personal items, but she seems intent on spending the last of her money any foolish way she can. It seems she has a plan in mind for the future, or at least her own future. When Small Frank leaves home and takes up residence on the streets of Paris as a homeless cat, Francis consults a “psychic” named Madeleine she and Malcolm met coming over on the boat to try to locate him. Madeleine is able to contact Small Frank through the use of a séance, even though he isn’t dead but just in a bad way living on the Paris streets.

French Exit is perfectly written, far removed from reality, entertaining, clever, droll, witty, whimsical, offbeat, and unlike anything else. If you’re looking for these qualities in a novel, they are here in abundance.