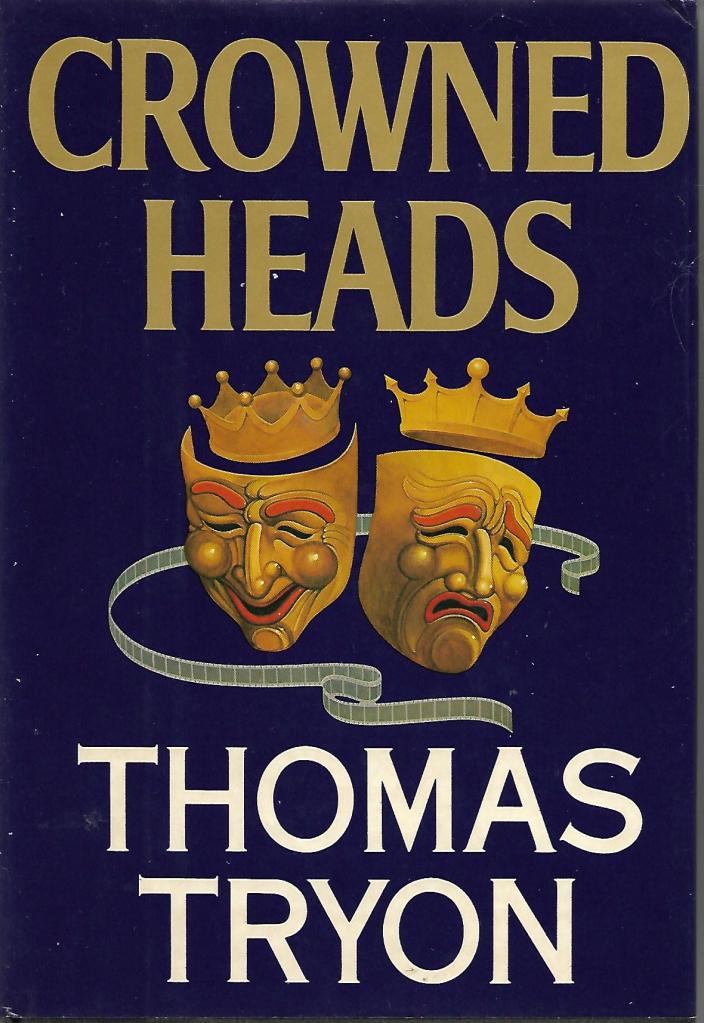 Thomas Tryon (1926-1991) was a movie actor turned fiction writer who had several successful and best-selling books in the 1970s and ‘80s. Crowned Heads is a 1976 collection of four novellas (each about a hundred pages) in one book about (fictional) movie people who, after they have become as famous as they’re ever going to be, are on the down-side of movie fame. Though these characters are fictional inventions, we assume that they are all based, at least in part, on real people.

The four novellas in Crowned Heads are “Fedora,” “Lorna,” “Bobbitt” and “Willie.”

“Fedora” is a Garbo-like movie star, reclusive and mysterious. She is described as being one of the biggest movie stars ever. She has an alluring European accent and when she gets in front of a movie camera, she generates movie magic. People love her and flock to her movies. One of the amazing things about her is that, even well into her seventies, she still looks young and can play characters much younger than her actual years. Just what is her secret? (No, she hasn’t made a pact with the devil and, no, she doesn’t have a magic youth potion like the one Meryl Streep and Goldie Hawn had in Death Becomes Her.)

“Lorna” is one Lorna Doone, a middle-aged, one-time movie actress better known for TV commercials she has appeared in. She has tons of personal problems, including a shoplifting charge and an insurance investigation into a fire she supposedly set in her home, and she needs a “rest.” She takes her rest at a remote, seaside Mexican resort, where she alienates all the guests, sleeps with as many men as she can, drinks lots of booze, takes pills, and has the kind of breakdown that only a woman can have in a tropical paradise. She only goes downhill from there, setting fire to her cabana, inflaming the local riffraff to passion, and having an encounter with a snake god in an ancient jungle temple. If you like stories about a woman coming “undone,” you’ll love this one.

“Bobbitt” is a character in a series of popular movies for children. The name of the child actor who plays Bobbitt is Bobby Ransome. Decades after Bobby Ransome’s star has fallen, he reappears to the people who knew him and worked with him. He is now an adult, of course, and, except for being “older,” he seems much the same as the kid actor who played the part in the movies. In fact, he hasn’t changed at all. As he adult, he lives in a world of fantasy, make-believe and illusion. Will a little sky-writing help to straighten him out?

“Willie” is Willie Marsh, a has-been movie star who seems to have nothing better to do than sit around his lavish Hollywood home and remember the glory days when his star was at its pinnacle. His home is a kind of museum, but, alas, he is alone and has no one to enjoy it with him. His “mate,” Bee Marsh, has died and left him alone. (We believe, of course, that Bee Marsh was Willie’s wife until it is revealed to us, bizarrely, that she was his mother.) With the obvious Hollywood “treasures” that Willie has in his home, he is certain to attract a criminal element (the “have-nots”) who resents him because he is one of the “haves” and is obviously rich. When a trio of “have-nots” make their way into Willie’s home (under false pretenses), he at first welcomes them because he is lonely but soon discovers what a mistake he has made. The leader of the trio, whose name is Arco, is a lunatic and will resort to any means to get his hands on a certain priceless artifact that Willie is rumored to own. (This novella is based on the infamous 1968 Hollywood murder of silent-screen idol Ramon Navarro.)

Crowned Heads is a “dark” book, engaging, breezy to read, somewhere about halfway between pop fiction and contemporary American literature. It has become a kind of minor classic of the crime/Hollywood lore genre. Thomas Tryon was a talented writer who knew how to deliver a chilling story. He probably made the right decision to give up acting for writing. I first read all of his books years ago and was reading Crowned Heads for the second time.