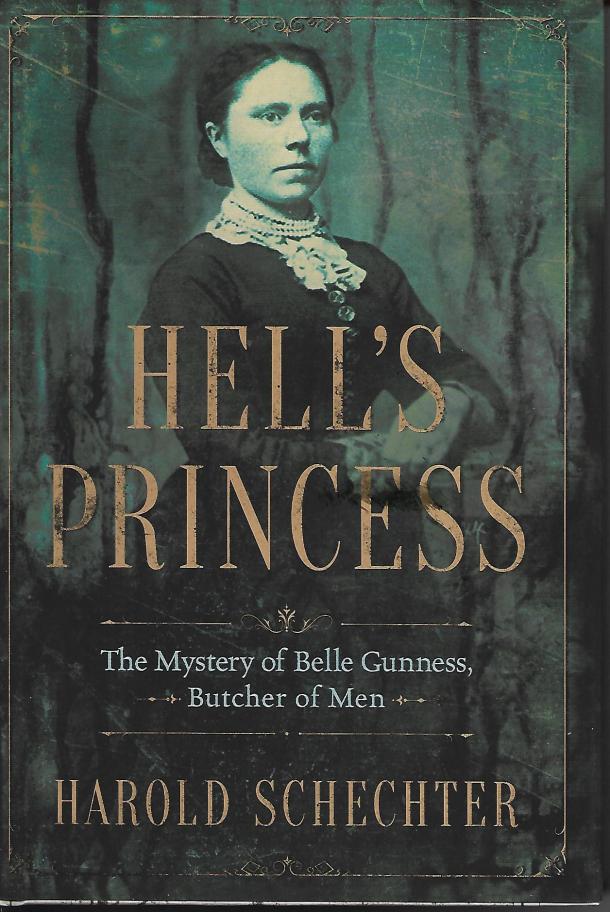 In the annals of American crime, serial killer Belle Gunness of La Porte, Indiana, stands tall. Born Brynhild Paulsdatter Størset 1859 in Norway, she emigrated to America in the 1880s, eventually settling in Chicago, where she changed her first name to the more American-sounding “Belle,” acquired herself a husband, one Mads Sorenson, and several adopted children. (Whether she gave birth to the any of the children herself is not known.) She experienced two suspicious fires in Chicago, one in her home and one in a small (unsuccessful) business she owned, and collected insurance on both fires.

Eventually she poisoned her husband without bringing suspicion to herself and collected on his life insurance. With the insurance money, she bought herself a farm in La Porte, Indiana, and from there she was on her way to a life of cruel, vicious crime. Soon she found herself another husband, a decent widower with two small children named Peter Gunness. Within a few days of her wedding, she murdered her new husband’s infant daughter. The doctor in La Porte found the death of the child to have been caused by edema of the lungs. Children dying was nothing unusual. Once again, Belle got away with murder.

The murder of her second husband, Peter Gunness, was a little more difficult for Belle to sustain. She bashed his head in with a meat grinder and said it was an accident. Many people were suspicious of her story and an inquest was held, but Belle was eventually cleared of any wrongdoing. Again she collected money on his life insurance. Peter Gunness left behind a five-year-old daughter in Belle’s care. Peter’s brother, the girl’s uncle, would eventually abduct the girl and take her away to get her away from Belle. He knew what others refused to see.

Being from Norway and herself speaking the language, Belle began advertising in Norwegian-language newspapers for a “farmhand.” She offered an easy job managing a prosperous farm with a beautiful farmhouse, lots of good food, and the potential for a bright and happy future. The only stipulation was that respondents be willing to pay $1000 to “buy in.” This was the early twentieth century and $1000 was a significant sum of money.

There were lots of Norwegian-speaking immigrant men who would jump at the chance for a good life on an Indiana farm. Some of them were alone in the world and were looking for a wife. While Belle weighed nearly three hundred pounds and had a face that might cause nightmares, there were plenty of men willing to marry her for all the advantages that such a marriage might bring them. She corresponded with a few of the men, flirted with them via letter and offered them all kinds of inducements. The most important thing to her, though, was that they convert all their assets into cash and bring the cash with them, thereby severing all ties with their old lives.

Of course, Belle was interested only in the money. She had no regard for human life, no empathy, no humanity. She was what would later come to be known as a psychopath. She generally poisoned her victims and then beat them to death. After they were dead, she mutilated their bodies, cut off their heads, arms and legs, and then buried them in her “hog yard.” She reduced her victims to a subhuman state. An exact number was never known, but it was believed she murdered as many as twenty-eight. Perhaps even worse, she killed a number of her own children, including her sixteen-year-old daughter, Jennie. She had no qualms about doing away with anybody she found inconvenient, and for a long time she got away with it. She was a master at self-preservation, at covering up her crimes and then lying and prevaricating when confronted.

There was one young farmhand, a man named Ray Lamphere, with whom Belle had an ongoing feud. They had been “close” at one time, carrying on a difficult-to-comprehend sexual relationship, but Ray, according to Belle, was jealous of her male friends and eventually took her to task for money he said she owed him. Belle had Ray arrested on several occasions for trespassing. She claimed to be afraid of him, stating that he threatened her with bodily harm and worse. (Ironic, isn’t it?) In time, Ray would be the perfect foil for Belle’s diabolical machinations.

One of Belle’s respondents was a “well-to-do” farmer from North Dakota named Andrew Helgelien. Belle cajoled him to come to her, making him all kinds of promises, assuring him the two of them would be happy together. She gave him specific instructions about converting all of his assets into cash before coming to La Porte and bringing the cash with him. When he arrived, she murdered him within a few days of his arrival, mutilated his body and buried him in the hog yard.

Andrew Helgelien had a brother named Asle. When Asle tried to find out what happened to Andrew in Indiana, he was met with Belle’s lies, but he refused to believe her and was not going to let the matter rest. His determination to get answers threatened Belle’s entire criminal enterprise.

In late April 1908, in the middle of the night, a fire completely destroyed Belle’s house. In the charred rubble of the house were found four bodies, those of a headless adult female and three small children. The children were almost certainly the bodies of Belle’s children, aged five, seven and nine, but the identity of the female body was never fully established.

The fire had the marks of Belle’s unfettered cruelty. For all the people who believed the headless female corpse was Belle, there were just as many who fervently believed she had staged the whole thing and escaped, placing the body of a female acquaintance inside the house to make people think it was her own body. She had, of course, over weeks or months, “set up” Ray Lamphere to make people think he had sufficient motive for setting the fire and wanting to exact revenge upon her.

In a sensational, headline-grabbing trial, Belle’s former farmhand Ray Lamphere was tried for the murder of the four victims of the fire. He was found guilty of arson but not murder and sentenced to two to twenty years in prison. After serving only a small portion of his sentence, he died in prison of tuberculosis.

The Gunness “murder farm,” of LaPorte, Indiana, was the most sensational case of the day, eliciting slavering interest on the part of the public, not only in the U.S. but also abroad. And, after the fire that apparently brought the case to a close, everybody had an opinion as to whether Belle was still alive and performing her foul deeds in some other location. As late as the 1930s, there were regular Belle Gunness “sightings” coming from every part of the country, but authorities investigating “leads” always came up with nothing.

Hell’s Princess by Harold Schechter is a fascinating true-life crime story, a real page turner. Sadly, the Belle Gunness case is one that was never solved, a case that left many unanswered questions. It’s not an exaggeration to say that millions of people wanted to know what really happened to Belle Gunness after the fire that destroyed her home. Why was the body of the woman found in the fire without a head, when it’s an established fact that the head is the last portion of the body to be consumed in a fire? Did Ray Lamphere really set the fire or did Belle set it herself to fake her own death? If the body of the woman found in the fire was really Belle, did she kill herself and her children because she believed she would eventually be caught and brought to justice? Or did she escape after setting the fire and continue her killing ways in some other location under another name? Only God knows the answers to these questions and he’s not telling.