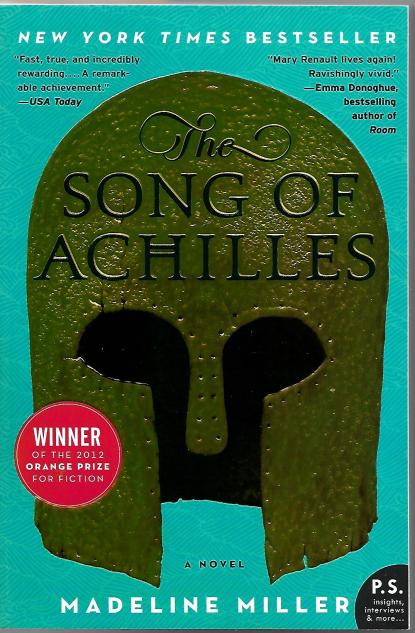 The Song of Achilles ~ A Capsule Book Review by Allen Kopp

In Greek mythology, Achilles was a blond-haired perfect youth, the “best of the Greeks,” the most capable warrior who ever lived. (His opponents would run screaming from the battlefield when they saw he was fighting against them.) His father was a mortal, King Peleus, and his mother a very unpleasant goddess sea nymph named Thetis. Achilles is the central character in Homer’s epic poem about the Trojan War, The Iliad.

The Trojan War, according to mythology, occurred approximately twelve hundred years before Christ. It was fought between Greece and the city of Troy and came about when Paris of Troy kidnapped Helen, the wife of King Menelaus of Sparta. Helen was thought to be the most beautiful woman in the world (or at least the most beautiful woman in Greece) and was so prized the Greeks were willing to go to war to get her back. They assembled a huge fighting force and traveled in boats to the city of Troy, in what is now Turkey. They set up an encampment near Troy with the intention of staying there until Helen was returned unharmed. It was not to be a brief military engagement, as some predicted. It ended up lasting all of ten years or more. Homer’s The Iliad is about the Trojan War and The Odyssey about the Greek soldiers’ struggles to get home again after the war was over.

The Song of Achilles by Madeline Miller is a retelling in novel form of the Trojan War and the exploits of Achilles. It is told in the first-person voice of Patroclus, Achilles’ lover and companion. Patroclus is not a warrior but just goes along to Troy for the ride with Achilles, the person he loves most in the world. He is Achilles’ confidant, advisor and sometimes his conscience when Achilles is just about to be undone by his hubris (a Greek word meaning pride). Patroclus is aware of the prophesy that says Achilles will die and never return to Greece. Their union is such that when one of them dies, the other will die.

The Song of Achilles lies somewhere in the borderland between pop fiction and contemporary literature. It brings the ancient world to life and makes the story of the Trojan War accessible, if you, like me, don’t think you could ever read through the six hundred pages of Homer’s The Iliad. It’s an epic poem, for heaven’s sake, and I’m not one for poetry.

The book lags in the third quarter, as the Greeks are encamped outside of Troy for such a long time and there isn’t much going on except the blood feud between Agamemnon and Achilles over the slave girl Briseis. Agamemnon and Achilles have resented each other since the beginning and the matter of Briseis only brings things to a head. The pace picks up in the last thirty pages or so, and the conclusion is satisfying and moving. Achilles’ mother Thetis, who has disliked Patroclus from the beginning, makes an uncharacteristic gesture at the end that makes us think she wasn’t so bad after all.