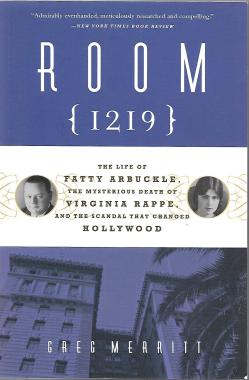 Room 1219, by Greg Merritt, is an American success story; how one man from humble beginnings rose to the pinnacle of his profession. It’s also a true crime story showing how that same man was ruined by a press that is more interested in dishing dirt and promulgating scandal than in being fair and objective and getting at the truth.

Roscoe “Fatty” Arbuckle was the biggest movie star in the world, the first to sign a contract for a million dollars a year. His onscreen persona (a good-natured, bumbling man-child) was the most recognized in the world. He lived in a mansion (for which he paid $250,000) in the most exclusive section of Hollywood. At a time when a Model T Ford cost $370 (what most people were driving, if they drove at all), Fatty drove a custom-made, $34,000 Pierce-Arrow.

On Labor Day in 1921, Fatty Arbuckle’s world came crashing down. He drove his Pierce-Arrow the 350 miles from Los Angeles to San Francisco (the road wasn’t even paved the whole way yet), rented three adjoining suites on the twelfth floor in the exclusive St. Francis Hotel in San Francisco, and hosted a little party for a handful of his friends.

A minor movie actress named Virginia Rappe with pretentions of making it into the big time was in attendance at Fatty’s Labor Day party, along with three other women and three other men, besides Fatty. Miss Rappe was 30 but was always shaving a few years off her age, so it was given variously as 23 or 25. She was a showgirl, an alcoholic, and was no stranger to men or to sex. (Later, much to Fatty’s detriment, she was characterized as pure, unsullied and virginal.)

During the course of the party, Virginia Rappe became ill, apparently (to most observers) from drinking too much liquor. She began tearing at her clothes and complaining of terrible abdominal pain. She was crying and carrying on and saying things like “He hurt me” and “I’m dying.” When a doctor was summoned, the doctor determined that she had only had too much to drink and would be all right. Four days later she was dead. An autopsy revealed she had a punctured bladder resulting in peritonitis. What caused her bladder to puncture could not be determined; the autopsy doctor could only conclude it was from an “external force.”

Immediately Fatty Arbuckle, who had since returned to his home in Hollywood believing that nothing was amiss, was accused of Miss Rappe’s death. The love the world bore for him instantly turned to hate. The press labeled him as a beast and an ogre, a gross fat man with salacious appetites. He became a symbol for excess and for all that was morally wrong in America, particularly in the motion picture industry. Conversely, Virginia Rappe became a symbol for outraged purity. Both extremes were untrue and especially unfair in Fatty’s case.

What, if anything, did Fatty Arbuckle do to Virginia Rappe in that San Francisco hotel room that contributed to her death? That was the question the whole world was asking.

Fatty’s defense team (assembled at great expense) believed he would be charged with manslaughter (the grand jury’s recommendation). Crusading San Francisco district attorney Matthew Brady, however, had other notions: he sought a murder conviction. He was courting the women’s vote (woman had just been given the right to vote in 1920) and believed that women everywhere wanted Fatty to get the maximum punishment. The charge was changed from manslaughter to murder but, in the preliminary hearing, the judge determined that a murder conviction wasn’t warranted and again reduced the charge to manslaughter.

So, with much hoopla and publicity, Fatty was tried for manslaughter in a sensational trial that was the talk of the country. The trial resulted in a hung jury (10 to 2 favoring acquittal), so the whole thing had to be done over.

In the second trial, Fatty’s defense team seemed over-confident. They didn’t bother to put Fatty on the stand to explain for himself what had happened in the hotel room, and they didn’t give closing arguments. The result was another hung jury, but this time 10 to 2 for conviction.

Fatty was called to the stand to testify in his third trial. The jury believed him (the truth has a sound of its own) and, after about five minutes of deliberation, voted to acquit him. Finally, the ordeal was over. He was free to return home and resume his shattered motion picture (acting/writing/directing) career.

Not so fast, though! Six days after Fatty’s acquittal, all his movies were banned from American movie screens by the Motion Picture Producers and Distributors of America (MPPDA). (Studio heads wanted a clean slate, with Fatty gone.) So, after the terrible ordeal he had been through, he was not going to be given a chance to redeem himself in the eyes of the public. His career was effectively over. At thirty-five years of age, with possibly many more years of productivity ahead of him, he was ruined.