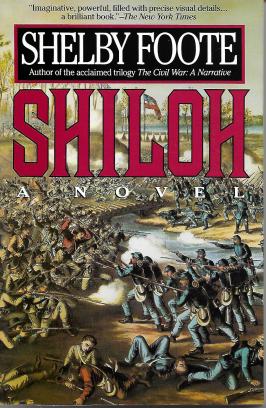 The Battle of Shiloh (also known as the Battle of Pittsburg Landing) was fought in southwestern Tennessee, on April 6th and 7th, 1862. It was the mostly unsuccessful effort by the Southern forces to keep two armies of the Northern forces from joining together and advancing into the Confederacy. The soldiers of the South, commonly referred to as the Rebels, considered that they were trying to keep a foreign invader out of their land, as the Revolutionaries had done in 1776. Casualties were heavy on both sides (about 20,000), and people everywhere were shocked by the wholesale carnage. The Battle of Shiloh was the biggest and costliest battle up to that point in the Civil War. There were, however, worse battles to come.

Shiloh is a short (225 pages) novel by writer/historian Shelby Foote. Although it’s fiction, it’s based on actual historical records of the battle. The action is told from the point of view of regular fighting men (not generals or officers) who lived the battle firsthand: aide-de-camp, adjutant, rifleman, cannoneer, and scout. It’s told in the language of the common man, what he sees and hears on the ground, rather than that of the military strategist or the West Point graduate. We get the Southern point of view and then the Northern point of view in alternating chapters throughout the book. Both sides believed they were fighting a just cause and both sides were determined to win without giving an inch to the enemy. Many people in the South believed the war to be a lost cause from the start, considering the superior numbers and weapons of the North.

The Southern forces were winning on the first day of battle, but on the second day the tide turned in favor of the North. The two Northern armies joined forces and repulsed the Southern forces. The South wasn’t giving up, though. It was going to be a long and terrible war.