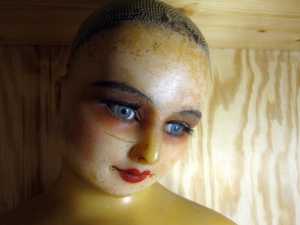 At the Mannequin Factory ~ A Short Story by Allen Kopp

Poppa’s face was dry and lined, like old leather. The red pouches under his eyes made his eyes look half-closed, even when they were open all the way. His mouth was a thin, lipless line in which a Marlboro cigarette was inserted. For sixty of his seventy years, he had smoked Marlboros, an untold and uncalculated number of them.

He reclined in his chair that had molded itself to the shape of his body—or his body had molded itself to the shape of the chair. The room was dark and low, the perpetual cloud of smoke hanging like a pall between Poppa and the ceiling. A small lamp with a little cluster of red flowers painted on the lampshade, the only color in the room, sat on a table between his chair and Momma’s.

Poppa and Momma both puffed on their cigarettes. For them, puffing on a cigarette was part of the act of breathing. A breath wasn’t a breath without a puff to complement it. And while they puffed away they both kept their eyes on the screen a few feet in front of them. The screen was the eye on the world, the only eye, to which they had given their fealty. It didn’t matter what was on—a boxing match, a train wreck, news of the world, cowboys and Indians, romance, dancing, drama, music or laughter—it was all the same: they regarded everything the eye brought to them with the same fish-eyed blankness.

The door opened and Elma entered. Momma and Poppa didn’t look up but instead kept looking at the eye. Elma took off her coat and hat and stood in the middle of the room; she looked expectantly at Momma and Poppa, though the eyes through which she saw them were only slits.

Elma went into the kitchen to get the things they wanted and took them back into the living room. When she set the bottle of beer on the table next to Poppa’s arm, he didn’t look up, but his arm reached out, seemingly of its own accord, and brought the bottle to his lips. He took a long drink and smacked his lips and set the bottle back down.

Elma had mixed the peanuts and popcorn together in one bowl, the way Momma liked them. Momma grabbed the bowl and began eating hungrily, never looking away from the eye. Elma opened a new carton of Marlboros and stacked the packs on the table, five on Poppa’s side and five on Momma’s, and when these things were done she went up the winding stairs to her own people.

The room seemed crowded now with twelve of them. They sat or stood about in different poses. Elma had dressed, wigged and hatted them according to her own whims. There was the society lady with the fox fur, the businessman with a pencil-line mustache, the small boy standing beside the dresser in play togs, ready to catch a ball, the lady with one leg canted out, hands on hips. They all had beautiful, painted-on, perfectly proportioned faces, luminous eyes and pearl-like teeth.

Some had movable arms and legs so they might be posed sitting or reclining. Elma liked these best because they seemed more real. To amuse herself, she would sometimes dress a man in a lady’s dress—including a hat with a veil—or a lady in a man’s work clothes or overalls. She also tried different wigs and hats to get a different look or feel. In this way she amused herself for hours and kept from being lonely.

There was one man in particular she liked to whom she had given the name Frankie. His arms and legs moved and his head swiveled from side to side. His skin was soft and pliable and warm to the touch. Elma dressed him in silk pajamas and put him beside her in the bed and covered him up. On cold nights, with the light off, she would have almost sworn there was a living, breathing man in the bed beside her. It gave her a feeling of well-being unlike anything else.

For twelve of her thirty-nine years, Elma had worked in the office of a mannequin factory. All day long she sat at a desk and typed letters or did small errands for the two bosses. They liked her because she always did what she was told to do without complaint, worked for very little money, never missed work, and didn’t mind working an hour or two over when the work was piling up. She was the very rare woman who had little to say and didn’t believe that her opinions were of any importance. If they could have ordered a dozen more like Elma, they would have.

Anytime a mannequin couldn’t be used or was defective in any way, Elma asked if she might have it to keep for her own. Nobody at the mannequin factory ever asked her why she wanted the mannequins or what she did with them, but they were always willing to comply. These mannequins that Elma rescued from the trash heap she added to her collection. When she carried one of the mannequins home, people stopped to look at her, but nobody ever suggested that she was doing something she shouldn’t do or that she should be stopped. Poppa and Momma, of course, never noticed what she did and never went up the winding stairs to her rooms.

She was delivering a typed report to one of the bosses when she met Shakespeare face to face in an otherwise deserted hallway. Instead of veering away from her and keeping on his side, he stepped in front of her and stopped her in her tracks. He put his hand familiarly on the underside of her wrist and smiled.

All she could do was shake her head and step around him and walk on. When she got back to her desk, she was breathless and a little confused. No man had ever paid any attention to her before and when she looked at herself in the mirror she knew why. By the kindest and most generous assessment, she was hideously ugly. Her nose was crooked, her hair mouse-brown, her eyes small and ferret-like, her teeth misshapen and brown. She could never remember a time in her life when she had cared much about the way she looked or about the effect that she might have on other people. If Shakespeare spoke to her again, she would ignore him or register a complaint.

On a blustery day in fall when she was walking home in the near-dark, she realized Shakespeare had fallen into step beside her. She hadn’t seen where he came from; he was just there.

“Leave me alone!” she said. “You don’t have any business bothering me!”

She looked at him and when she saw the hurt in his eyes, she knew she had been more unkind than she needed to be.

At home it was always the same. Momma and Poppa never looked at her or spoke to her. They just sat puffing and looking at the eye. She brought their food, which some days was only pretzels, candy, popcorn or beer. When she fixed them a sandwich or a bowl of soup, they hardly ever ate it and she ended up throwing it out.

In the evening after she saw they only wanted to be left alone with their cigarettes and with the eye, she retreated to her rooms and to the people there with whom she felt comfort and peace. She began to ask herself: What kind of life is this I’m living and do I plan on doing these same things every day of my life until I die? The answer, if there was one, did not make itself known.

For the first time in her life, her sleep was disturbed by nightmares, and during the day at the mannequin factory she began to be nervous and tense. She took much longer to do her work than usual and any time one of the bosses sent her on an errand, she usually managed to find a private place, in the ladies’ room or elsewhere, to stand quietly and stare at the wall for a half-hour or so in a trance-like state before returning to her desk.

She didn’t see Shakespeare for several days and wondered what had happened to him. Maybe he wasn’t suited to his job, spray-painting mannequins, and had already been fired. She was more than willing to put him out of her mind.

The next time she saw Shakespeare, it was not at the mannequin factory but on the sidewalk down the street. When she saw him coming toward her in a crowd, she looked away but, again, he stopped her in her tracks and put his hand on her arm.

“I believe we knew each other once,” he said.

She stepped around him and kept going, eyes to the ground.

“Have you ever thought about trying a little makeup?” he said in a loud voice.

“Mind your own business!” she snapped.

Then one day Elma found herself on a tiny elevator with Shakespeare, going up to the fourth floor. For a couple of minutes, at least, she was stuck with him in close quarters and couldn’t walk away.

“We knew each other in school,” he said.

She looked at him with distaste. “I don’t remember,” she said.

“I never saw you before,” she insisted.

On a rainy Friday as she was leaving work, Shakespeare was going out the door at the same time she was.

He walked along beside her and there was nothing she could do but keep walking with her eyes down and pretend he wasn’t there. When they came to an establishment where liquor was sold, he looked at her and inclined his head to indicate they should enter. Without knowing why, she let herself be led inside.

They sat side by side at a bar. She had never been inside a barroom before and only wanted to leave. When a beer in a glass was set in front of her, she looked at it and didn’t seem to know what she was supposed to do.

“Do you think whenever a person speaks to you, they’re bothering you?”

“Wait a minute,” he said. “I have something I want to give you.”

He gave her a tiny pill that he took out of a little brown envelope in his pocket. She looked at the pill in her palm and started to give it back. “What is it?” she asked.

“It’s something that will make you feel better. About the world and about life. Take it and see if it doesn’t.”

“You’re a dope dealer?” she asked.

He laughed, showing his long teeth. “All things are relative,” he said.

“I don’t know what that means,” she said. “I have to be getting home.”

“Put it in your pocket and take it with you. Tomorrow is Saturday and you don’t have to go to work. Take the pill in the morning when you’re alone and see if you don’t have a wonderful day.”

He laughed again. “Suit yourself!”

When she walked into the house, she was more than usually disgusted by the sight of Momma and Poppa sitting in their chairs staring at the eye and puffing on their cigarettes. She wanted to leave again but the thought of the bleak, wet, lonely streets leading nowhere stopped her. Without acknowledging to Poppa and Momma even that she was home, she went up the winding stairs to her rooms and to the only people in the world who knew and loved her.

(Continued in “The Celestial City”: https://literaryfictions.com/2016/09/16/the-celestial-city/