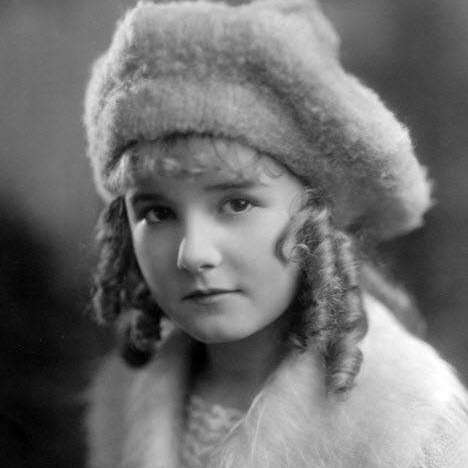 In 1926 Mrs. Bertha Indelicato of Burbank, California, took her son, Sidney Indelicato, to a movie studio to audition for a part in a motion picture. She dressed him up in a light-blue jumper and a yellow shirt, with pork-pie hat and strapped, patent leather shoes. With Sidney’s cherubic face and naturally curly blond hair, he looked as much like a girl as a boy.

At the audition the casting director, a man named Perkins Belmont Perkins, wearing knickers and argyle stockings, separated the boys from the girls so he could get a better look. When Sidney was herded in with the girls, Mrs. Indelicato didn’t dare object, afraid that doing so might cost him a part in the movie.

“She’s rather fat,” Perkins Belmont Perkins said, “but I think she has the “look” we’re looking for.”

“Have your daughter here at eight o’clock sharp on the fourteenth and I believe we’ll be able to use her.”

After they left the studio, Bertha took Sidney to a drugstore down the street to get a banana split.

“Just think!” she said to him as he stuffed ice cream into his mouth. “We’re in!”

“Why, didn’t you hear the nice man say they were giving you a part in the movie, honey?”

“Just look sweet and the director will tell you everything to do. Mama will be right beside you every step of the way.”

When Bertha’s husband, Buster Indelicato, came home from his job as a Ford salesman, Bertha told him the good news: Sidney landed a part in a movie.

“There’s just one thing,” she said. “They think Sidney is a girl.”

“I had to think fast. I told them his name is ‘Sylvia’ Indelicato.”

“And they believed that?”

“You always did dress him more like a girl than a boy.”

“If that’s the only way he can get a part in a movie, then a girl he will be!”

“Well, I always wanted a daughter, I guess,” Sidney said, reaching for a beer.

In the few days she had before the fourteenth, Bertha took Sidney shopping and outfitted him with complete feminine attire, down to the lacy bloomers. She fluffed out his hair and gave it some extra curl, insisting that she and Buster call him “Sylvia” at the dinner table and refer to him at all times as “she” and “her” instead of “he” and “him.”

“You’re going to confuse him,” Buster said, “and then we’ll have a mental case on our hands.”

“Because you are an actor,” Bertha said. “You will someday be a great actor. This will be your first acting lesson. Great actors pretend to be who and what they are not.”

“Just remember that underneath the laces and frills you are still a boy. It’s only to the outside world that you are a girl.”

“That will come later, dear, after you are an established star.”

On the morning of the fourteenth, Bertha had Sidney at the studio an hour early and was forced to wait nervously in an outer office to be called. Finally, when Sidney was called for a wardrobe fitting, Bertha was given a copy of the script. It was up to her to familiarize herself with the story and tell Sidney, as Sylvia, what he (she) was supposed to do.

The picture was called Baby Bountiful and starred that lovely young motion picture star, Arlette Joseph. She played a young mother who, when she loses her own baby to illness, goes with her handsome young husband to an orphanage to pick out another child. There are so many adorable children to choose from that the young couple can’t decide which one to take. That’s when the orphans show off their singing and dancing talents to help them make up her minds.

The young couple still can’t decide, so they go home, assuring the orphans they will return later and will, most assuredly, choose one of them to take home with them. That night, all the orphans dream of being the chosen one. The next day the young couple returns to the orphanage with some very exciting news. The young mother’s rich uncle has died and left her his millions. Since she will have all that money, she can take all the orphans and they will all live together on a fabulous Long Island estate with their new mommy and daddy.

Sidney was the orphan named Lulu. He wore a white dress and white stockings, a long wig with a large white bow. When the director told the orphans to jump up and down with excitement or to act sad, they did exactly as they were told.

Bertha stood behind the director and the camera, watching. She believed, of course, that Lulu stood out from the other orphans and that her acting was the most realistic. Her eyes brimmed with tears and her heart ached with pride. After all her years of dreaming, her own little Sidney was finally in motion pictures!

When filming was completed for Baby Bountiful, Arlette Joseph thanked all the children personally for playing orphans and everybody packed up to go home. A few days later Bertha received a fat check in the mail for Sidney’s appearance in the film. When she showed the check to Buster, he whistled and said, “That’s more than I make in a month!”

A week later the casting director from the studio called Bertha and asked if Sylvia was available to act in another picture. Bertha nearly dropped out her dentures on the kitchen floor in saying yes.

They hired Sylvia an agent, who promptly changed her name from Sylvia Indelicato to Sylvia Dell. The agent procured parts for her in five pictures the first year and seven the second year, with each part progressively larger than the one before it.

Buster quit his job and began staying home all the time, “seeing to things.” He managed Sylvia’s career from the sidelines with useless advice that nobody listened to. He began wearing double-breasted suits, smoking big cigars, and hosting luncheons at all the fancy restaurants around town.

Sidney, for his part, went along with what was expected of him. When he was at home he could be Sidney, but the minute he went outside the house he had to be Sylvia. Any time he became downhearted, Bertha presented him with a big bowl of ice cream and waved the most recent studio check in his face. When she went to the bank to cash his checks, she always took him along so he could see the big stacks of green and come to know how important they were to his family.

In 1929 the Hollywood studios stopped making silent films and converted to sound. Prepared as she was for any contingency, Bertha hired a diction coach to work with her Sidney. After all they had been through, she wasn’t going to let the advent of sound end her baby’s film career.

The diction coach, aware of how much money was to be made, declared Sylvia a “natural” after a few lessons. If he knew that Sylvia was really a boy instead of a girl, he never let on. He was accustomed to the ways of movie people and wasn’t squeamish about such things.

Sidney’s first sound picture was a big success. He had five lines, which he spoke with a convincing girlish intonation. After that, there were more offers for parts in other motion pictures. The money mounted up as Sylvia’s fame and popularity increased. Sylvia Dell fan clubs sprang up around the country. There were Sylvia Dell coloring books and dolls, an entire line of Sylvia Dell merchandise.

Sidney began to put on a lot of weight. The doctor advised Bertha to put him on a low-calorie diet, but she refused, certain the “pudginess” was part of his appeal. People had come to know him as fat and if he was no longer fat they would no longer know him.

When Sidney inevitably began to show outward signs of becoming an adult male, Bertha and Buster began to panic. They took him to a doctor and wanted to know if there was some way he, the doctor, could medically “alter” Sidney to enhance his feminine qualities and subvert the masculine ones.

“Are you suggesting I castrate him?” the doctor asked.

“If that’s what it takes,” Bertha said.

“Ask him if he wants to be castrated and I can almost assure you what his answer will be.”

“Good day to you!” the doctor said.

Luckily Sidney was fair-haired and the whiskers on his chin and cheeks could easily be covered up, but his deepening voice was more of a concern. Bertha began plying him with pills that she bought from a “medical consultant” and giving him cognac and whiskey toddies to “calm his nerves” and help him to sleep. In a few months he was a child alcoholic. He took to smoking prodigious numbers of cigarettes, even when he was in character as “Sylvia.” The sweet little girl had turned into a monster. The movie offers began to dry up.

Right before Sidney’s sixteenth birthday, he disappeared. Bertha believed he had been kidnapped and that soon the kidnappers would make their exorbitant demands for his return. She would pay any amount—every cent if she had to—for his return.

The police searched for Sidney but found no sign of him and after a year they gave up. They would keep his file on record, though, and if anything came up they would reopen the case. Bertha began walking the streets at night, looking for him in alleyways. She was certain he was all right and wasn’t very far away. All he needed was for her to find him.

Thirty years went by and Sidney didn’t return home. Bertha and Buster spent all the money and then there was no more. Buster died, leaving Bertha alone in her home with her memories. Her walls with lined with “stills” from Sylvia Dell movies. She never stopped thinking about Sidney.

Small packages began appearing on her doorstep, a packet with fifteen dollars in it and then one with twenty, a potted plant, a loaf of pumpernickel bread. She didn’t know who was leaving these little gifts, but when a box of chocolate-covered cherries appeared, she knew it had to Sidney. Only he would know that had always been her favorite kind of candy.