The Lighthouse ~ A Capsule Movie Review 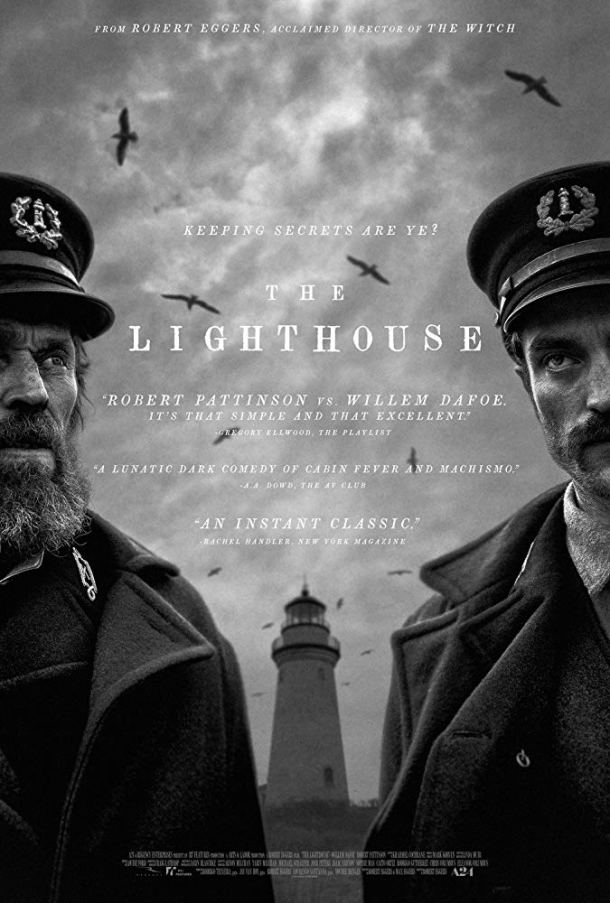 The Lighthouse ~ A Capsule Movie Review by Allen Kopp

The Lighthouse has to be the most unusual new movie of the year. It’s set in 1890 and shot in black and white, with an aspect ratio of approximately 1.19:1, which means the picture is practically square (instead of elongated, which is what we’re used to) to emulate early motion picture photography. The music score (with a nod to the classic film scores of Bernard Hermann) is made up of a foghorn, horns and pipes, glass harmonica and an ocean harp (a stainless steel bowl with bronze rods around the rim that gives off an ethereal sound when used struck a friction mallet). The dialogue spoken by the two characters is based on the “local color” poems and writings of Sarah Orne Jewett. All these filmmaking elements come together to spell “A-R-T” instead of a commercial project designed to generate box office revenue. (You know, like about 98% of the movies released during the year.)

The only two characters in The Lighthouse are two very different men, one younger (Robert Pattison) and the other older (Willem Dafoe). Both men are named Thomas (although the younger man lies and says his name is Winslow). The older Thomas used to be an old seafaring man and is now a lighthouse keeper who knows all about tending the light. The younger Thomas has a murder on his conscience from when he worked in logging (he let a fellow worker die when he could have saved him). He is hired for a period of four weeks to be lighthouse assistant.

The film is set entirely in and around a lighthouse on the Atlantic seacoast of the United States. It’s not an inviting, scenic or hospitable place. The work the younger Thomas does is backbreaking labor and very often involves nasty chores, such as emptying chamber pots and cleaning out the cistern. “I did not take this post be a housewife or slave,” he says defiantly. The older Thomas is something of an uncouth swine and, understandably, gets on the younger Thomas’s nerves. They sleep in very cramped quarters and are always together. The older Thomas talks incessantly, sometimes in soaring soliloquies that don’t make much sense.

The loneliness and isolation begin to play on the younger Thomas’s mind. The four weeks he was supposed to be at the lighthouse are up, but a terrible storm sets in and the person who was supposed to relieve him doesn’t show up. So, now there’s a psychological element in play. Is any of this really happening or is it all just in the younger Thomas’s head? He’s already killed one man. Will he be driven to kill again?

The Lighthouse is not for everybody, of course. If you see it, you might think it’s not your cup of tea, but you can honestly say it isn’t like anything you ever saw before. Remember The Artist in 2011, a silent, black-and-white movie set in the 1920s? The Lighthouse is as uniquely memorable as The Artist, but in its own special way.