The Nun ~ A Capsule Movie Review 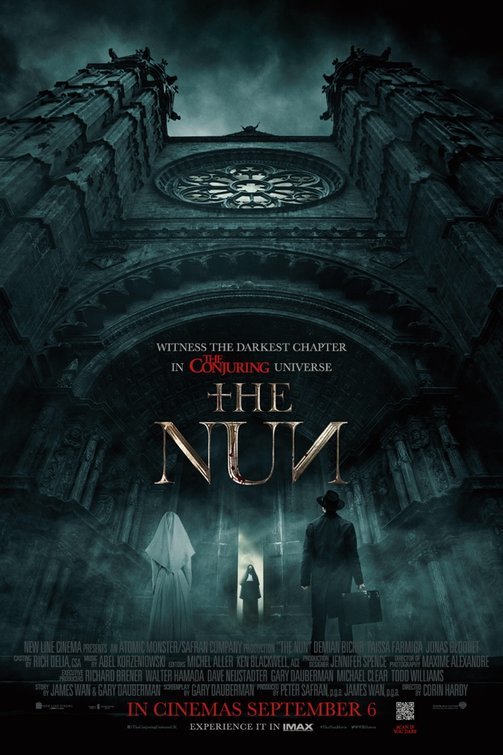 The Nun ~ A Capsule Movie Review by Allen Kopp

The Nun is set in 1952 in a spooky castle/convent in a remote part of Romania. The castle has a history of its own; it was built in the Middle Ages by a duke who was a practitioner of black magic and who wrote books on demonology and witchcraft. After the castle became a nunnery, the nuns engaged in perpetual prayer (adoration) to keep the evil spirits away. (Why didn’t they just leave?)

A young nun has apparently committed suicide in a disturbing manner at the Romanian convent. The Vatican has sent a middle-aged priest, Father Burke (Demian Bichir) to investigate. Father Burke has a history of dealing with cases that involve or seem to involve demonic possession. With him is a young novitiate (a nun who hasn’t taken her final vows) named Sister Irene (Taissa Farmiga).  Sister Irene has a history of “visions,” so that apparently is what qualifies her to help with the investigation of the nun’s suicide. Father Burke and Sister Irene are guided by a young man who calls himself Frenchie, a French-Canadian living near the convent; he’s the one who found the body of the nun who apparently committed suicide. He has put the body in the ice house to help preserve it, but when he takes Father Burke and Sister Irene to see it, it (the dead body) has moved from a lying to a sitting position.

Well, as might be expected, an evil spirit, a demon, is at work in the convent. This spirit takes the form of a grotesque nun named Valak, whom we saw briefly in the earlier movie The Conjuring 2. Valak doesn’t take kindly to people from the church trying to exorcise her. She will fight back with everything she has. Will she prevail over Father Burke and Sister Irene? I wouldn’t count on it, since they have the force of “good” on their side. They also have an ancient holy relic containing the blood of Christ. Now, that I would like to see!

If you’ve seen The Conjuring and The Conjuring 2 and enjoy horror movies of this kind, you will probably find The Nun worth your time, even though there isn’t much new here that we haven’t already seen in other movies. Ever since movies like Rosemary’s Baby and The Exorcist, hellish demons are a staple of American movies. They’re going to be around for a long time until people stop paying money to see them. Isn’t it better to see demonic possession on the movie screen than to experience it yourself? From what I’ve heard, I think it’s an experience that none of us want to know firsthand.