The Seagull ~ A Capsule Movie Review 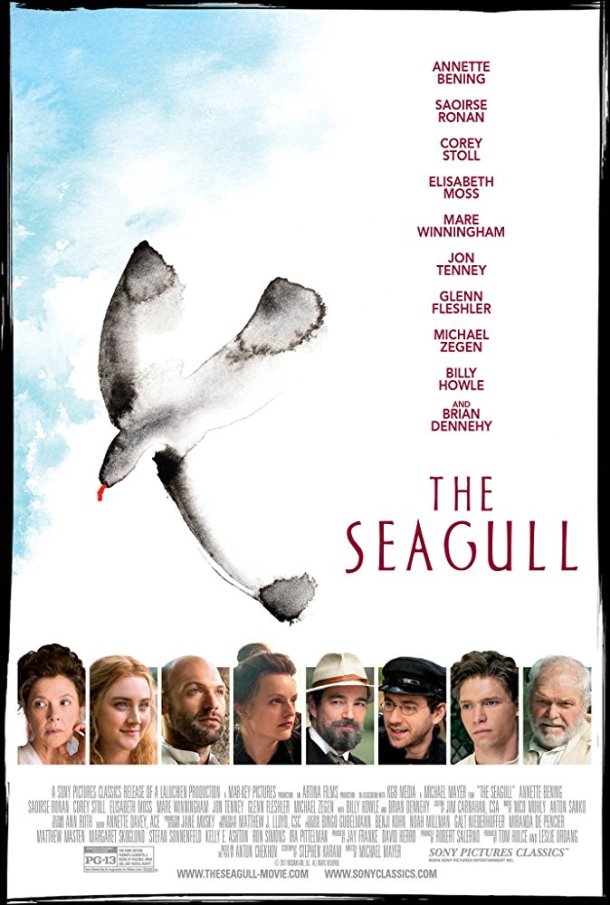 The Seagull ~ A Capsule Movie Review by Allen Kopp

The Seagull is based on the famous play by Anton Chekhov of the same name. It’s set in Russia in 1904, in summer, in a country house beside a lake. Irina (Annette Benning) is a Moscow stage actress in her mid-fifties come to visit her elderly brother (Brian Dennehy) and her son, Konstantin. She has her boyfriend, Boris Trigorin (Corey Stoll), with her. Boris is a famous and celebrated novelist, about fifteen years younger than Irina. He is drawn to Nina (Saoirse Ronan), an innocent country girl who wants to go on the stage. Nina is dazzled by Boris’s fame as a writer and imagines his life is much more romantic than it really is. Boris and Nina spend time away from the others, partly in a boat on the lake, much to Irina’s displeasure.

Then there is Masha (Elizabeth Moss), daughter of the housekeeper, Polina. Masha is one of the most interesting characters. She wears black all the time (“in mourning for my life”), takes snuff, drinks to excess, and looks older than her twenty-eight years. She is in love with Konstantin and, since she can’t have him, she marries the schoolteacher, Miguel, a sincere if unprepossessing fellow.

Like Boris Trigorin, Konstantin is also a writer, but an untested one. He’s jealous of Boris for his success, for the esteem with which his mother holds him, and, more importantly, for his attraction to Nina. Konstantin is in love (unhappily as we will see) with Nina. He shoots and kills a seagull and throws it at Nina’s feet for no reason other than that he feels sorry for himself. The destroyed seagull is a symbol for innocence lost.

In the final act, a kind of coda to the whole thing, we see what becomes of all these characters two years later. Nothing has really changed, as we will see. The more things change, the more they stay the same.

With the multiplex given over almost entirely to comic book movies and youth-oriented fare, it’s hard to find a movie like The Seagull. It’s a chance to see a film version of a world-famous Russian play, if that should interest you, as it does me. You may come away enriched for having had the experience and you won’t go home with a special effects headache.