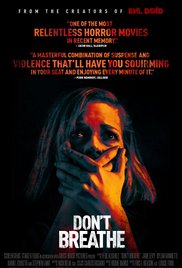 Three young people, Alex, Roxanne and Money (Dylan Minnette, Jane Levy, Daniel Zovatto), burglarize people’s houses for a living. When they hear about an eccentric war veteran who has three hundred thousand dollars from a settlement involving his daughter’s traffic death, they think it will be an easy score; he is bound to have the money somewhere in his house, since he is reputed to not trust banks. The fact that he is blind makes it even more of a cinch. How can they go wrong? If they can get that much money from one break-in, they can quit robbing houses and do something less risky. Roxanne can get her young daughter away from her trashy home life.

The blind veteran (Stephen Lang) with the three hundred thousand dollars lives in a nearly abandoned section of Detroit. He is, in fact, the only person there. He lives in an old house with only a vicious, snarling dog for company. When Alex, Roxanne and Money arrive in the middle of the night to break into the blind man’s house, they know about the dog beforehand so they have a doggie treat ready that will put the dog to sleep (not long enough, as they soon discover).

The blind man isn’t the pushover the burglars think he is going to be. The house is fortified like a prison with bars on the windows. They trip the alarm system to get inside and, once inside, they realize they can’t get back out. Though he can’t see them, the blind man is more than capable of defending himself. He knows there is at least one intruder, but he doesn’t know how many. He kills Money right off and is stalking Alex and Roxanne with deadly intent. When they are trying to find a way out, Alex and Roxanne discover a secret in the blind man’s basement they would be better off not knowing. The message here is clear: If you break into people’s houses to rob them, you are probably asking for a deadly dose of something terrible and, if you get it, you probably deserve it.

Don’t Breathe is an effective suspense/horror film with, you can tell, a modest budget and a running time of an hour and twenty-eight minutes. The horror is not supernatural horror involving ghosts and malevolent spirits but earthly horror that comes from what people do to other people. It’s plenty violent and there are some unexpected twists and turns along the way, involving prey that turns out to be more predator. There’s a twist at the end that might lend itself to a sequel, depending on how profitable the original is.