The Day Belongs to the Rain 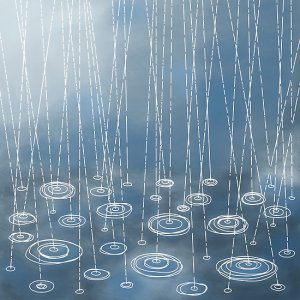 The cool air came down from the north; the warm air from the south. When they met somewhere in the middle, they engaged in fierce battle. The weather reports on the radio were dire: The storm is coming—if you aren’t in a safe place, go to one. Almost immediately, anxious mothers in plastic rain bonnets began showing up to pick up their children.

Miss Whiteside turned from the blackboard where she was explaining how to diagram a simple declarative sentence. Hardly anybody was paying attention to what she was saying. Most of the attention in the room was focused on the storm that was raging outside the windows. Some of the children looked worried; a couple of them were making no secret of the fact that they were afraid and about to cry. Others were enjoying the excitement that was making their day so much more interesting than they had expected. More than a few of them were blank and slack-jawed—it would take a bomb exploding to get a response from them.

“Does everybody see how to diagram a sentence now?” Miss Whiteside asked. “Are there any questions?”

“Are we going to die?” a boy in the third row asked.

The rain pelted the windows, louder now than it was a minute ago. The lightning crashed, the lights flickered and went out. Everybody in the room said “Oh!” as if on cue.

She knew they wouldn’t get any work done until the storm was over. “You may put away your language books,” she said, “and read your library books silently for the time being.”

A boy in the back of the room, unable to sit still any longer, stood up and went to the window. Then another boy joined him and after that another.

“What is this?” she said loudly from the front of the room. “Nobody told you to get out of your seats! School isn’t over!”

There was a knock on the door: another mother come to rescue her child from the storm. When the girl saw her mother, she went running into her arms like a war refugee. The mother and daughter left tearfully without looking back. In a few seconds, another mother came and after that they came in bunches.

Miss Melline, the fifth-grade teacher from down the hall, came to the door and motioned Miss Whiteside to step out into the hall.

“How are we doing in here?” Miss Melline asked, leaning in too close. Hooded eyes like a frog.

“We’re all right,” Miss Whiteside said. “About half the class has already absconded.”

“Mine too,” Miss Melline said. “The little bastards. You’d think they’d never seen a thunderstorm before.”

“I wonder that they haven’t sent us word to send everybody home. Especially with the lights out.”

“I think they’re waiting for the rain to let up. If we send the students out in this raging storm, some of them will drown and the school will be faced with lawsuits.”

“I’m all for the shutting down for the day,” Miss Whiteside said.

“Amen to that,” Miss Melline said. She rolled her eyes comically and went back to her class.

The storm continued and didn’t seem to be weakening. By the time the principal’s office sent word to the teachers to send the students home early, Miss Whiteside only had five left who hadn’t been picked up. When she asked them if they could make it home all right, they said yes; they had just been waiting to be allowed to leave. They didn’t mind getting drenched if it meant getting to leave early.

“By morning they’ll have the lights on again,” Miss Whiteside said, “and everything will be back to normal.”

When she thought everybody had left and was herself getting ready to leave, she noticed someone sitting quietly in the back of the room, almost blending into the background as if he wasn’t there at all. On closer inspection, she saw it was Roland Peabody, the little brown-eyed boy who some of the other kids called Lippy because of a surgical scar he had from a cleft pallet. He came from a hillbilly family and always seemed a little slow, although his grades were passable. He was largely ignored by his classmates, unless they were feeling mean, in which case they laughed at him and played tricks on him, such as putting a dead mouse in his lunch.

“You can leave now, Roland,” she said.

“Come on, then. I can’t leave you here all alone.”

“Are you afraid to go out in the rain?”

“Do you want me to call your mother to come and get you?”

He stood up from his desk and left the room without looking at her. She heard his footsteps going down the stairs. Relieved that everyone had finally left, she put on her coat and headscarf and locked the door. As she walked down the stairs, she was thinking about what she would do with her unexpected afternoon off. There was always laundry to do and shopping. Maybe she would just get into bed and listen to the rain on the roof.

While backing her car off the nearly empty teachers’ parking lot, she saw someone, no more than a blur, standing in the rain against the building. She couldn’t tell who it was at first, but when she rolled down the window she saw it was Roland Peabody. She motioned him over to the car.

“What’s the matter, Roland?” she asked.

“You need to get yourself on home and get out of the rain.”

“Okay.” He looked at her, waiting for her to drive away.

“Where’s your jacket?” she asked. “You’re soaked through to the skin.”

She moved some books and papers off the seat while he went around to the other side of the car.

“Don’t you even have a cap?” she asked as he opened the door and slid onto the front seat.

She had a folded-up dinner napkin in her purse. She took it out and gave it to him. He ran it over the top of his head and down his face.

“Where do you live?” she asked.

“Out of town. In the country.”

“You walk that far to school and back every day?” She put the car in gear and lurched forward into the rain that was like being under a waterfall.

“I walk it sometimes. Most of the time I ride the bus.”

“Why aren’t you riding the bus today?”

“Did you mean to miss the bus or did you just not make it in time?”

“Is there some reason you don’t want to go home?”

“No.” He looked down at his hands.

“Your mother and father will be glad to see you. They’ll be glad to know you made it home safely in this weather.”

“I live with my grandma.”

She started to ask him a question but stopped herself. It wasn’t part of her job as a teacher to know where a boy’s parents were. She knew nothing about Roland or any of her other students. She had never taken any personal interest in them. It wasn’t part of her job description. She thought of herself as being covered in a suit of armor, like the knights of the Crusades, where nothing could touch her. She didn’t really like being a teacher; she was only marking time until she could do what she really wanted, which was get married and have children. The right man just hadn’t come along yet, but she knew he was out there somewhere and she would find him. She was only thirty-three. There was still lots of time.

When she saw Roland shivering, she turned on the heater. “There’s a heavy old shirt on the back seat there,” she said. “Why don’t you get it and put it on.”

“If you’re worried that it’s a girl’s shirt, it’s not. It belonged to my father.”

He took the shirt and wrapped himself in it.

Beyond the downtown business district she turned onto the old highway that went out into the country. She went past a couple of gas stations, a tavern, a sawmill, a sprawling junkyard, an overgrown cemetery and a few scattered houses, and then there was nothing. She wasn’t sure where she was and suddenly she felt bad for Roland, living so far out of town; she thought how lonely it must be for him.

“Do you have any friends out here?” she asked.

“I know a few people,” he said, “but they’re mostly old people.”

Before he could answer she came to the old bridge made of rusted iron that she seemed to remember from a dream. She stopped the car because the river was flowing over the bridge onto the pavement as if it would overpower the bridge and sweep it away.

“I’m not going to let you walk in this rain!” she said, her voice sounding shrill to her own ears.

She backed the car away from the bridge, turned around in the middle of the highway and headed back the way she had come. She went through the town, out the other end of town, and kept driving westward on the featureless highway. She had no destination in mind, no clear plan. For once in her life, she wasn’t thinking past the next minute or two. She was, in a way, fighting back against the rain, against the unfairness of life that forced a little boy to live so far out in the country and not even have a cap or a jacket to wear in the rain.

After a couple of hours, she crossed the state line and stopped at a pleasant little roadside inn where they had a pleasant meal of vegetable soup and toasted cheese sandwiches and talked about nothing of importance. After she had her gas tank refilled, they were ready to keep going.

She drove all night in the rain, crossing two state lines. She planned to keep going until she saw a good reason not to go farther. Roland slept most of the night on the seat beside her. He never once asked where they were going.

Around dawn the rain finally ended. She stopped the car on a hill in farm country, facing the eastern sky. She watched the sunrise while Roland breathed and dreamed, wrapped in her father’s old shirt. She had never seen anybody sleep so peacefully before.

A police car pulled up quietly on the shoulder of the road behind her. She watched the young officer in the rearview mirror as he got out of his car and come up to her window. She rolled down the glass and gave him a smile.

“No, we just stopped here to rest for a little while. We’ve been traveling all night.”

He looked past her and saw Roland asleep on the seat. “Is that your son?” he asked.

“I need to see your driver’s license.”

She opened her purse, found her license and handed it to him.

He looked at the license and then at her face. He handed the license back to her and gave a little salute.

“Where you headed?” he asked.

She watched him as he went back to his car and drove away. She smiled at him again and gave him a little wave but he wasn’t looking and didn’t see it.

She waited a little while so as not to give anybody who might be watching any reason to think she had done anything wrong. Then she started the car and drove off into the sun-drenched morning. She planned on driving all day.