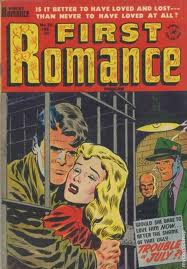 Arlene Danker had been down to the little market and was on her way back home, pulling her wheeled basket. One of the wheels had developed a squeak that it didn’t have before. In the basket were milk, bread, a one-pound bag of peanuts in the shell, light bulbs, cat food, a carton of Lucky Strike cigarettes with filter tips, and a romance magazine. She would have to hide the romance magazine as soon as she got home and not let anybody see it.

About halfway home, she stopped on a corner in the shelter of an overgrown cedar tree to rest for a minute and get a quick look at the magazine. She looked around to see if anybody was coming and, seeing no one, opened the magazine to a random page. There was a story entitled “How to Improve Your Love Life,” with a big picture that covered a whole page. In the picture, a man and a woman were sitting on a couch in front of a fire looking into each other’s eyes.  The woman was wearing a low-cut red dress and had hair the color of a lemon. The man had shiny black hair streaked with gray and an eye patch over one eye, making him look sinister and foreign. If he spoke, he would have a voice like Conrad Veidt. A few pages over was another story, “I am in Love with My Father Confessor and Afraid My Husband is Going to Find Out.” She read the first few sentences of that story, but she stopped reading when she heard somebody coming.

It was only the mailman, a young one she had never seen before. His uniform didn’t fit him well; he looked like a child playing dress-up. They used to have the same mailman all the time, but he was gone now and in his place was a series of young ones. This one looked bored and unfriendly and unhappy. She was going to smile at him and say something pleasant, but he didn’t even look at her. She couldn’t imagine that he would last very long in the job.

When the mailman was past, she put the romance magazine in the pocket of her coat and continued on her way, pulling the cart behind her. Most of the remaining three blocks were uphill and she had to take them slow because she had just turned seventy-five and didn’t have the stamina she once had.

She passed a house where several small children were playing some rowdy game in the front yard, seemingly trying to out-scream each other. As she walked past, they stopped what they were doing and stared at her. One of them said something in a shrill voice and the others laughed, but she didn’t catch what it was he said; it sounded like foot the shoat faster, but it couldn’t have been that because it didn’t make any sense. Whatever it was, though, they seemed to find it funny.

By the time she got home, she was out of breath and her calf muscles ached. She opened the door and bumped the cart over the threshold. Hazelnut, her daughter, came to the kitchen doorway and looked at her, fists on hips. She was still wearing her silk Japanese lounging pajamas with the dragon on the chest and the white crinoline bag she wore on her head at times to protect her hairdo.

“It takes you one solid hour to walk to the store and back?” Hazelnut said. “I ask you to do one little thing!”

Arlene squeaked the cart into the kitchen past Hazelnut, who was a good six inches taller than she was. Sitting around the breakfast table were Addison, Hazelnut’s husband, and Addison and Hazelnut’s grown children, Duncan and Lorraine.

Lorraine was a bored twenty-three; she believed that any favorable opportunities in life had passed her by since she remained unmarried and still lived in her parent’s house. Duncan, who with his fair good looks was nothing like either of his parents, had just turned twenty. He had little ambition in life beyond increasing the size of his chest and biceps. Addison was reading the personal ads in the morning newspaper to keep from having to talk to his children.

Arlene wheeled the cart past the table without looking at any of them and stopped at the refrigerator to put the milk away.

“I hope you remembered my cigarettes,” Hazelnut said. “I don’t see them anywhere.”

Arlene picked the carton—which had become buried under the other items—out of the cart and handed it over. Hazelnut grabbed at it like a person dying of thirst in the desert who was being offered a drink of water. In just a few seconds, she had the carton torn open and a cigarette in her mouth. She lighted it and exhaled a stream of smoke and sat down at the table.

“Must you?” Addison asked. “While I’m eating?” He fanned the air with the folded-up newspaper.

“What’s that you’ve got there, sticking out of your pocket?” Hazelnut asked Arlene, pointing to the romance magazine.

“Nothing,” Arlene said. She had for the moment forgotten the magazine. She clamped her arm down on it to hide it. “Just something I picked up at the store.”

“I hope you’re not spending good money on those trashy magazines.”

“You may have money to spare, but if you do you’re the only one. If you have a big stash of secret money somewhere to draw on, I’d like to know about it.”

“You should know by now you can’t hide anything from her,” Lorraine said. Having finished her breakfast, she was examining parts of her face closely in a tiny round mirror. “She always spots everything. I think she should join the FBI.”

“I think she should stop smoking,” Addison said, “or go pick out her coffin.”

“I’ll have you know I had a chest x-ray last fall,” Hazelnut said, “and the doctor said it was clear and fine. He said my lungs are perfectly healthy.”

“He got the x-rays mixed up with somebody else’s,” Duncan said and laughed. When Hazelnut glared across the table at him, he closed the gap in his bathrobe to cover his chest.

“Just don’t you worry about it,” Hazelnut said. “I’ll outlive all of you.”

“Some people are too mean to die,” Addison said.

In a moment of defiance, Arlene took the magazine out of her pocket and laid it face-up on the table for all to see. “I don’t care,” she said. “I’m not a child. Why should I hide it?”

“I’m disappointed in you,” Hazelnut said, regarding the magazine with distaste. “If you have to waste money, can’t you at least waste it on something worthwhile?” She picked up the magazine and opened it and turned a few pages. “This is just filth.”

“I’ll leave it hidden in my room and you won’t have to see it,” Arlene said.

“This is not a prison,” Addison said. “She can read whatever she likes. I’ll pay for the magazine.”

“She’s my mother and you just stay out of it!” Hazelnut said. “Anyway, I say what goes in this house.”

“I’d be happy to share my pornography with you, Grandma,” Duncan said.

“Any time you bring pornography into this house, mister,” Hazelnut said, “you can pack your bags and catch the afternoon train.”

“When you and your brother were little,” Arlene said, speaking to Hazelnut but in a rather indirect way, “I covered up for the two of you all the time. One time you dented the fender of your father’s new car with your bicycle. When he saw it, he was furious. I knew you had done it, but I convinced him that it happened on the parking lot at work.”

“We’ve heard all this stuff a million times before,” Hazelnut said with a sigh.

“When you were in fourth grade, you stole a five-dollar bill out of the teacher’s desk at school. When they called me and told me, I said I didn’t believe you had done it, but then they found the money in your shoe where you had hidden it. They wanted your father and me to come to the school to meet with the principal, but I told them your father was on a business trip and couldn’t make it. I didn’t want him to know you would steal money from the teacher.”

“I don’t remember that,” Hazelnut said. “Are you sure it wasn’t someone else?”

“I always knew she was a criminal,” Lorraine said to Duncan behind her hand.

“When you were in the eighth grade, you and two other girls were caught smoking cigarettes in the rest room at school. They were going to suspend you for three days, but I begged them not to do it because your grades weren’t very good and I was afraid you would get behind in your studies and wouldn’t get promoted to the next grade.”

“She’s been smoking since eighth grade?” Duncan asked. “That’s about sixty or seventy years, isn’t it?”

“And then there was that time in high school when you and your friend Norma Holliday were caught shoplifting costume jewelry from a store downtown. The store detective called the police and I had to come down to the police station and get you. They were going to make you stay overnight in a cell to teach you a lesson, but I pleaded with them to let me take you home. I told them you would be terrified if you had to spend the night in jail.”

“I think I see a pattern here,” Addison said.

She picked the magazine up and hurled it through the air. Arlene, still standing in front of the refrigerator, threw her arms up to keep the magazine from hitting her in the face; it struck her on the shoulder and fell to the floor.

Hazelnut doubled up her fists and her face contorted with anger. “You always do that to me!” she said. “Can’t I even have an opinion in my own house without having you try to make me look like a fool? I don’t like trashy magazines! What is the crime in that?”

Addison shrugged his shoulders and threw his hands up in a melodramatic gesture and rolled his eyes, eliciting a laugh from Duncan.

“Oh! You always take the side against me, don’t you?” Hazelnut said. She ran from the kitchen and up the stairs to her bedroom and slammed the door.

“It’s that time again,” Addison said, but nobody knew exactly what he meant. He wiped his mouth and finished his coffee and went out the back door and drove away in his car. He would be gone all day until far into the night.

“Gentlemen, sheathe your swords!” Lorraine said, and then she too got up and left.

Arlene was left alone in the kitchen with Duncan. He gave her a little nod and a knowing smile that seemed to say, “You and I are alike and we’re not like them.” He continued to eat his breakfast, glad for the stillness, while Arlene opened a can of cat food and spooned it into the cat’s bowl in the corner. The cat, hearing the sound he liked best, came running from another part of the house and began gobbling the food as if he hadn’t eaten in a week.

She poured herself a cup of coffee and sat down to the table. She spread the magazine open before her and turned to the first page. She was going to read the whole thing from front to back and not skip anything—not even the ads about relieving menstrual pain and getting rid of acne. It was her magazine and she was going to do with it as she damn well pleased—even if it took all day.