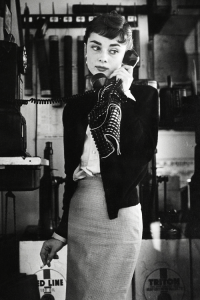 People are Talking ~ A Short Story by Allen Kopp

It was a slow day. A boy came in to buy a reed for his clarinet. A woman brought her daughters in to look at pianos with no intention of buying. A man came in to inquire about selling a violin he had that belonged to his brother who had just died. A couple of other people came in looking for certain classical recordings, one Bach and one Sibelius. Then it was time for lunch.

Roberta was alone in the shop, so she couldn’t leave. She sat on a high stool behind the counter, where she could see the door, and ate the lunch she had brought. While she ate, she looked over the morning paper. When she was just about finished, the wife of the store’s owner came in.

“Whatever would you want to talk to me about?” Roberta asked, her smile fading because Mrs. Doheny seemed angry about something.

“You know, of course, that my husband is a married man?” Mrs. Doheny said. She leaned forward on the counter, her face uncomfortably close to Roberta’s.

“I just wanted to make sure you are aware of that fact.”

“I’ve worked for him for two years. How could I not know he’s married?”

“And we have two children in high school.”

“I own half of this store. I have as much say over what goes on here as my husband does.”

“I could fire you without batting an eyelash but I thought it only fair to warn you first. If you don’t heed the warning, then I fire you!”

“Warn me about what?”

“Your relationship with my husband is to remain purely a professional one. If it goes any farther than that, I have no other choice but to take action.”

“What action? I don’t know what you’re talking about.”

“You and my husband were seen together, more than once, outside the store.”

“Never mind who it was. You just need to know that people are not as stupid as you seem to think they are.”

“What makes you think I have any interest in your husband?”

“Those in a position to know.”

“Oh, I think I’m starting to see it now. I’ll bet it’s that girl, that Stephanie, that he fired a while back for stealing things when she was alone in the store, isn’t it? She’s your niece or something, as I remember.”

“I knew she was stealing and I told her if she didn’t stop I was going to tell on her. The next time I knew she was doing it, I went to Mitchell and told him about it and he fired her, niece or no niece.”

“If you’ll excuse me, Mrs. Doheny, I’m not going to talk to you any further. This conversation is at an end.”

“You’re not going to get rid of me that easily!”

“If you have suspicions about anything, why don’t you talk to your husband about it and leave me out of it?”

“You don’t think I’d believe his lies, do you?”

“Why, you stupid little bitch! I could buy and sell you ten times over!”

A customer came in and Mrs. Doheny went into the back of the store where no one could see her. When the customer left a few minutes later, she re-emerged, her face pale and puffy from crying.

“You don’t look very busy,” she said as she prepared to leave. “I don’t think you’re earning your pay.”

She pushed over a display case with glass shelves, causing a tremendous crash. The display case broke and the merchandise scattered over a good part of the store.

“That will be deducted from your pay, of course!” she said, as she went out the door.

While Roberta was sweeping up the mess, she cut the first two fingers of her right hand. She went into the bathroom to hold her hand under the faucet, not caring if anybody came in or not—if they did, they could help themselves to anything they wanted as far as she was concerned.

The rest of the afternoon passed slowly. Right before closing time, Mitchell Doheny came in. He noticed right away that the display case was gone.

“What happened?” he asked.

“It fell over and broke,” Roberta said.

“I was nowhere near it when it happened.”

As she was preparing to leave for the day, he came up behind her and put his hands on her shoulders. She wasn’t used to being touched and flinched.

“Would you like to have dinner with me to celebrate?” he asked.

“I have nowhere else I have to be,” she said.

Instead of having hamburgers at the diner, they went to an Italian restaurant with real Italian cuisine, live music, and checkered tablecloths.

“How did things go for you in the store today?” he asked, as they sipped wine and waited for their food.

“I’m thinking about opening another store across town. How would you like to manage it?”

“We’ll see. Could we talk about something other than business?”

“What else is there?”

“I want to show you something,” she said.

She opened her purse and held up the small handgun she always carried, wrapped loosely in a headscarf.

He laughed when he saw the gun. “Are you planning on shooting somebody with that?” he asked.

It was just starting to rain when they left the restaurant. She could easily have walked home, but he insisted on taking her.

When they pulled up in front of her building, she turned to thank him for the ride.

“You know I don’t drink coffee,” she said.

“I can see we’re thinking along the same lines.”

She turned on all the lights in the little apartment and turned on some music they both liked, a small ensemble with Benny Goodman so mellow on clarinet. While the coffee brewed, he made himself comfortable on the couch.

She went and sat beside him. He put his arm around her and started to pull her toward him, but she disengaged herself and got up and went back into the kitchen. When she came back with his cup of coffee, he took a sip and set the cup down. He reached for her and began kissing her, hurting her in a way, but she didn’t make him stop as she had always done before.