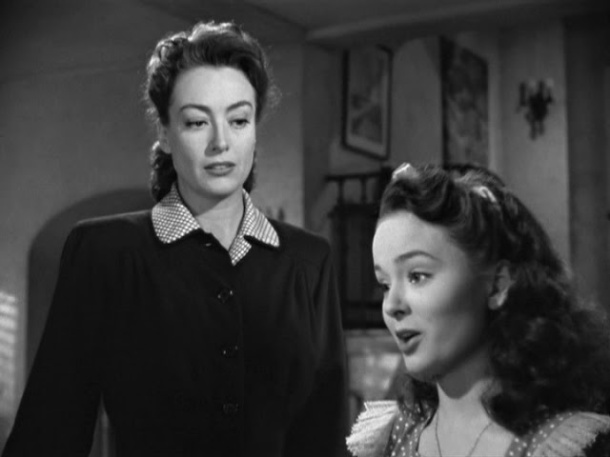 Why is it we never seem to get along anymore?” Mildred said to her daughter, Veda, who was eating a banana.

“Your father and I work very hard to give you and your sister a lovely home and all the things you want and need. If you don’t like your life, it isn’t my fault or his.”

“Don’t you get it, mother? We’re not rich! We don’t even have one servant! How can I hold my head up when my mother bakes cakes and pies to sell to the neighbors and my father works in a real estate office?”

“We do the best we can. When I was your age, I lived with my family in a boxcar down by the river. At night the police would come and raid us and make us get out, no matter how bad the weather.”

“Yes, mother, I’ve heard all that a million times before, but your life is your life and it doesn’t have anything to do with my life.”

“I’m proud that I was able to give you a better life than I had.”

“Oh, mother, don’t you see? It’s not just my life within these four walls! It’s this awful town and its men in overalls and women in uniforms! Its dollar days and its smell of grease!”

“The town was good enough for you not too long ago. What happened?”

“Well, in case you haven’t noticed, I’m really quite beautiful. I make the other girls in school look like the leftovers from a dog fight. I’ve had people tell me I could make it in the movies if only I gave it a try. Why, if I set one foot in Hollywood, those casting directors would be all over me!”

“Then why don’t you give Hollywood a try?”

“Because I’m seventeen years old and I would like to at least get a high school diploma before I take the world by storm.”

She threw her banana peel on the floor and went to the piano and began playing Chopin’s Valse Brilliante. After she had played a few bars, her face took on a dreamy, faraway look.

“That’s pretty,” Mildred said, not looking up from the cake she was decorating. “What’s it called?”

“It’s something you would never have heard of,” Veda said sniffily.

“For your information, young lady, I’m not a complete boob!”

“Pretty nearly, though. And while we’re on the subject, that dress you bought for me is truly awful. I’ll bet you bought it in the bargain basement because it smells cheap. I wouldn’t be caught dead in that thing.”

“I thought you would like it. The saleslady said it’s the latest thing.”

“It isn’t the right style for me. It’s too young.”

“Maybe if you wore it you would catch the eye of a really interesting man. One with money.”

“Veda, how can you speak to me that way? You know I would never look at another man as long as I’m so happily married to your father.”

“Mother, who are you trying to kid? Father has been stepping out with Mrs. Biederhoff for months now! It seems you’re the only one who doesn’t know about it. He’s probably over at her house right now, drinking cheap gin and playing gin rummy!”

“If I were you, I would divorce that loser so fast it would make his head spin!”

“How can you say such things, Veda?”

“But, to be quite honest, my sympathies lie entirely with you, mother. Mrs. Biederhoff definitely comes from the lower classes. But, then, so does father.”

“I suppose you think I’m low class, too?”

“Well, you never speak of your people or where they came from. You might have descended from rag-pickers for all we know.”

“Oh, Veda, it breaks my heart to hear you speak that way.”

Veda stood up quickly from the piano. “Oh, mother, really! When are you going to grow up and see things as they really are? If you would dump father, you would have a chance at attracting a better type of man.”

“I don’t want a better type of man. Burt is plenty good enough for me.”

“You say that as if you don’t really mean it. You’re not bad-looking in your way. You have a decent figure. Your problem is you have no taste in clothes and no style. With help from the right person on how to dress and how to fix your hair and makeup, you could be quite a stunning woman instead of a frump.”

“Do you really think I’m a frump?”

“I don’t want to be mean, mother, but I learned at a young age that it’s better to face the truth about yourself and others than to live in a fog of self-deception.”

“How about Wally Fay, for example? I know he isn’t very good-looking, but he’s a forward-thinking businessman and is bound to be rich some day.”

“Is money all you ever think about?”

“Can you honestly tell me that anything is more important? You can do anything with money and without it you can do nothing.”

“I would never think of Wally Fay that way,” Mildred said. “He’s your father’s business partner.”

“What difference does that make? If you have any sense at all, you’ll use Wally Fay as your one-way ticket out of this horrible existence you call life. I frankly don’t know what he sees in you, but you know he’s always been in love with you.”

“Hello, darling! How was school today?”

“School was the nuts but the baseball game after school was the berries. We beat the pants off the other guys.”

“Oh, mother!” Veda said. “How can you let her go around like that? She’s dirty and she smells like an animal.”

“She’s in one of her moods,” Mildred said. “She thinks she’s better than the rest of us and she doesn’t like her life.”

“How do you know about that? You’re nine years old!”

“Oh, I get around more than you think.”

“Well, you go upstairs now and get into a hot bath and put on some clean clothes.”

“Mother, she’s horrible!” Veda said after Kay had left the room. “The language she uses! Can’t you see what’s happening to her? Her environment is ruining her. Pretty soon she’ll be knocking over gas stations.”

“She does have a good time, though, doesn’t she?” Mildred said. “I remember when I was her age I…”

But she was interrupted in mid-sentence when Burt’s car pulled into the driveway with a squeal of brakes. She ran outside, wiping her hands on a dish towel.

“Burt, your daughter is impossible,” she began.

“Mildred, I need to talk to you privately,” he said.

“She’s just been telling me all the things that are wrong with me, you, Kay, and with the town.”

“I don’t care about that, Mildred. I said I need to talk to you!”

He took hold of her arm and pulled her into the garage. “I just stopped by to tell you I’m leaving you.”

“I’m in love with Maggie Biederhoff and I have been for some time. I’m going to get a few of my things and I’m moving in with Maggie tonight.”

“But, Burt, what about the children?”

“You can sue me for divorce on the grounds of incompatibility and infidelity and I won’t contest it. You can have the house and everything. I wont stand in your way.”

“What are you saying, Burt?”

“I’m saying I’m finally taking control of my own life.”

When Mildred went back inside, Veda was standing there with a smirk on her face.

“Do you believe me now?” Veda asked.

“I heard every word!”

“You shouldn’t listen in on other people’s private conversations.”

“He may be my father but he’s just another no-good bum who can’t do any of us any good!”

Mildred groaned and sat down at the kitchen table. “Get me a glass of water, will you, dear?”

“I think you need a good stiff drink!”

“You have your degree in mixology. Why don’t you fix it then?”

Mildred sniffled and made a goose call into her handkerchief. When Veda set the drink down in front of her, she downed it and had another.

“This is the best thing that’s happened in a long time,” Veda said.

“You’re free! Or at least you will be as soon as you get a quickie divorce!”

“Now you can go after Wally Fay or some other man who’s going places!”

“Veda, I’m not like you! I can’t go after some man I don’t love just for his money!”

“I want you to invite Wally Fay over for dinner. Wear a negligee or something filmy. Show a bit of nip. Men love that sort of thing. After dinner, I’ll take Kay to a movie and you can make your moves on Wally. Tell him you’re finally free of father. Give him what he’s always wanted from you and in ten minutes he’ll be eating out of your hand.”

“Well, isn’t that the general idea?”

“I’m going to take a bubble bath and get into bed,” Mildred said. “I have a terrible headache. I don’t even want any dinner. You fix a little something for Kay and tell her I’ve retired early. Don’t tell her yet about your father’s leaving. I want to tell her myself when the time is right.”

“Do you mean you’re not going to telephone Wally Fay?”

“Now that father is gone, you’re not going to finally fall into Wally’s arms?”

“I don’t really like Wally and I never have. He’s a pig.”

“And I’ll tell you something else, Miss Snooty Britches! I’m not going to take advice from you about men or anything else! You’re seventeen years old! What do you know?”

“Well, I’ll tell you one thing I do know. If you’re not going to pursue Wally in the way that fate has laid out for you, then I’m going to go after him for myself!”

“Veda, he’s old enough to be your father!”

“So? He can give me a beautiful home and all the things I want in life. When he’s pawing me and trying to get his hands under my clothing, I can just close my eyes and pretend he’s somebody else.”

“Now I have something to tell you.”

“I had decided I was never going to tell you this, but now that Burt has left me and we’re no longer a family, I think the time has come.”

“Mother, you’re not going to tell me that Wally Fay is my father?”

“Have you never noticed the resemblance? You have his mouth and his chin.”

“I never told him. I was afraid he wouldn’t be able to keep from telling Burt.”

“Then if Wally doesn’t know, I’m all right.”

“What are you saying?”

Mildred stood up from the table and slapped Veda in the mouth. Veda fell back against the wall but righted herself and returned the slap with equal vehemence. Mildred opened the drawer where the knives were kept and pulled out the knife she used for cutting up chickens. She threw the knife but Veda sidestepped it handily and reached for a skillet that she brought down on Mildred’s head. When Mildred regained consciousness, the fighting continued until neighbors called the police.