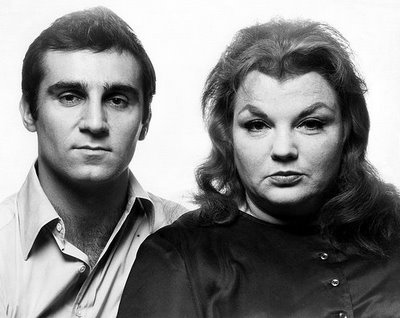 True story. Grumpy, overweight nurse Martha Beck meets suave gigolo Ray Fernandez through a lonely hearts club. Martha isn’t pretty but she has other qualities that are perhaps more important to Ray: she has a black heart and she’s smarter than the others. She dumps her elderly mother in a rest home, quits her nursing job, and she and Ray embark on a criminal enterprise of cheating silly, vulnerable women out of their money and jewelry and killing them if necessary. All these women have one thing in common: they are lonely and they can’t believe their good fortune that Ray has come into their lives. He’s young, dark and handsome, with an accent that is most appealing.

First there’s the mannish schoolteacher. When she and Ray are married, Martha goes along for the ride as his “sister.” A man having his sister along when he gets married doesn’t seem to arouse the suspicions of the schoolteacher. When Ray doesn’t sleep with her on their wedding night, however, she begins to suspect that something isn’t quite as it should be. The next morning she is chagrined to discover that the two thousand dollars she brought along with her is missing, along with some rings. When she demands the return of these things, Martha coolly offers her a cup of coffee. The schoolteacher wisely packs her things and leaves, wearing a silly-looking hat, but not before threatening Ray and Martha with legal action. They know—and we know—that she is only bluffing and they won’t be bothered with her again. Fairly easy.

Next is the silly (note that “silly” is the operative word here), cleavage-showing, middle-aged woman with the Southern accent. She says she is going to have a baby, apparently not knowing or caring who the father is, and she wants to marry Ray so her family won’t know what a whore she is. When she becomes obstreperous, Martha (again along as Ray’s “sister”) starts to give her pills to calm her down. Whatever the pills are, they must be really strong because soon the woman is dead.

Then there’s the silly old widow who lies and tells Ray she’s fifty-six when really she is older. He tells her his name is Charles Martin. “Isn’t that cute?” she coos. Ray (or Charles, as she believes) tells her he is forty-five and puts some gray highlights in his dark hair to prove it. Again the old widow doesn’t question the presence of Martha as the sister of her husband-to-be. On the night before they are to be married the next day, Ray entices the old widow to sign over all her assets to his name. “I’m going by the bank early in the morning,” he says. “It will make things easier if we take care of the business tonight.” Suspecting nothing, the old widow does as Ray says. After they retire for the night, though, she begins to worry and can’t sleep. Martha tells her to relax, that everything will be taken care of in the morning, but the old widow isn’t buying it. She gets out of bed and starts making a fuss. She can tell from the way that Ray and Martha are acting that she is in danger. When she says she wants to go out for a walk, even though it’s the middle of the night and she’s in her nightdress, Ray gives Martha a hammer and Martha knows what she is to do with it. She hits the old widow in the back of the head. She screams and goes down but is by no means mortally wounded. “Hit her again!” Ray screams. After they have killed the old widow, Ray is sweating. He sheds the pajamas he’s wearing and begins drinking from a whiskey bottle. Martha goes into the bedroom and gets into bed. We see Ray from behind as he goes into the bedroom where Martha is. He is naked and carrying the bottle. “Are you going to turn the light off?” Martha asks. “Leave it on,” Ray says. “I want to make love.” Sex and death here walk hand in hand.

We see by now that Martha is in love with Ray in her own twisted way. Ray has no interest in his female victims other than what he can get out of them—“I despise those women,” he says—and Martha will make sure it stays that way. She becomes jealous and possessive in the way of women in love. When Ray hooks up through the lonely hearts club with a young widow with an eight-year-old daughter, though, Martha begins to suspect that there is more between them than she finds acceptable. In the interim before the marriage, the young widow confides to Martha as her future sister-in-law that she is carrying Ray’s child. She and Ray just couldn’t keep from “sleeping together” when they were alone in the house. Martha tries to get her to miscarry the baby and when that doesn’t work she shoots her in the head and kills her. When the eight-year-old daughter comes home from school and asks where her mother is, Martha takes her into the basement and kills her, too. Ray then believes that everything will be all right and they can just move on to the next victim, but Martha can’t go on, knowing that Ray has “slept” with—and impregnated—another woman. She calls the police and turns herself and Ray in. They go to jail, of course, and are executed for their crimes. So ends their story.

How much longer could they have gone on if Martha hadn’t learned that Ray was “cheating” on her? She can rob people of their money and kill them when she believes she must, but she absolutely draws the line at infidelity.

Think what Ray and Martha could have done if they had had the Internet. All to the accompaniment of Gustav Mahler.