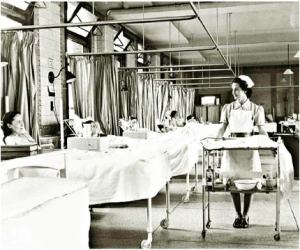 Gwennie sat at the dinner table with her sleepy-eyed father, her myopic, translucent-skinned brother, Booger, and her getting-crazier-by-the-minute mother. Gwennie had cooked the meal herself, but it was just a matter of opening a can of sauerkraut and cutting up a polish sausage into the kraut and heating them together. With her mother’s steady descent into madness, she had had to take on more and more of the household chores.

Her mother took a few bites from her plate and pushed it away and lit a cigarette and blew smoke out through her nose and looked up at the ceiling.

“I thought we were having fish sticks,” Booger said. His right eyelid drooped and he wore tortoiseshell glasses that were crooked because he had stepped on them.

“We’ll have them tomorrow,” Gwennie said.

“Your mother is going to cook us all a proper meal tomorrow evening,” Gwennie’s father said. It was the first word he had spoken since the meal started.

“I don’t think so,” Gwennie’s mother said. “It seems I’ve lost my knack for cooking.”

“It was all those shock treatments I had when I was in that mental hospital.”

“You didn’t have any shock treatments and you know it.”

“How do you know? You weren’t there.”

“The doctor told me.”

“He wasn’t there either. They gave me shock treatments late at night after all the doctors had gone home. They did a lobotomy on me, too.”

“It’s where they cut open your head and take out part of your brain.”

“They don’t do that kind of operation anymore,” Gwennie’s father said.

“What would happen if they took out your whole brain?” Booger asked.

“You can’t live without a brain, stupid,” Gwennie said. “But maybe in your case you could because you don’t use your brain anyway.” She usually felt bad when she was mean to Booger, but she didn’t seem to be able to help herself.

“Finish your dinner and shut up,” Gwennie’s father said.

“Can I go with you, Mother?” Booger asked.

“Not this time. This trip will be just for Mother.”

“Who’s going to pay for it?” Gwennie’s father asked.

“Don’t you worry your pretty little head about that. I have some money of my own. It won’t cost you one red penny.”

“Where is your money, Mother?” Booger asked. “Will you buy me a new bike?”

In answer to his question, she formed her mouth into an oval and blew a perfect smoke ring across the table at him.

“Oh!” Booger said as he watched the smoke ring dissolve into the air. “I want to try that! Give me a puff.”

“I’m very talented,” she said. She held her cigarette across the table to him and he took it from her and puffed it and tried to do what she had done, but the smoke just came out in a steady stream instead of in a ring.

“That wasn’t so good,” Booger said. “Let me try again.” He took another puff on the cigarette but again failed to blow a smoke ring.

“It takes practice,” Gwennie’s mother said. “It’s not something you can do the first time.”

“Oh! I can’t wait to start smoking so I can learn how to do that.”

Gwennie’s father looked on with disgust. “You’re the only person I know who would give a lighted cigarette to an eleven-year-old kid and encourage him to smoke. Do you want to give him lung cancer?”

“Oh, you just never could stand to see anybody have a good time, could you?”

“Let me try it,” Gwennie said.

She took the cigarette from her mother and took a practice puff, and on her second puff she blew three perfect smoke rings one right after the other.

“Ohhhh!” Booger said. “Those are beautiful!”

“Well, my daughter may not have my beauty, but at least she has some of my talent,” Gwennie’s mother said.

“Will you teach me to do that, Gwennie?” Booger asked.

“Why don’t you teach him something useful,” Gwennie’s father said, “like how to repair the furnace?”

“Can you do any more tricks, Gwennie?” Booger asked.

She stood up from the table and, in the space between the table and the sink, she balanced herself on her hands and walked forward about five feet until she lost her balance and fell over against the refrigerator.

“You could walk like that all the time, Gwennie!” Booger said. “You could wear your shoes and socks on your hands.”

“Nobody can say we’re not a family of many accomplishments,” Gwennie’s mother said.

“Can you do any more tricks, Mother?” Booger asked.

She picked a knife up off the table and, taking the blade in her hand, hurled it in the direction of Gwennie’s father. It narrowly missed hitting him and stuck in the wall two feet behind him.

He turned around and looked at the knife. “Were you trying to kill me, or did you miss on purpose?” he asked.

“Where did you learn how to do that?” Booger asked.

“A woman at the mental hospital showed me.”

“Do you expect me to believe they let mental patients play with knives?” Gwennie’s father asked.

“Late at night we went into the kitchen when nobody was around and that’s when we threw knives.”

“It seems a lot went on in that place late at night.”

“Oh, you have no idea! That’s when the most outrageous things went on.”

“Some of the men patients would get together with some of the women patients and they would…well…you know. They had wild parties that went on all night some nights.”

“They don’t allow the men and the women to mix in that place and you know it,” Gwennie’s father said with disgust.

“What do you mean ‘the ward for the in-betweens’?”

“The ward for the hermaphrodites.”

“What are hermaphrodites?” Booger asked.

“It’s people who are both sexes. Half men and half women.”

“And how many hermaphrodites are in ‘the ward for the in-betweens’?” Gwennie’s father asked.

“Oh, they had about sixteen in there when I was there.”

“Doesn’t that seem like a lot of hermaphrodites for one mental hospital?” Gwennie’s father asked.

“The rate of mental illness among hermaphrodites is very high,” Gwennie’s mother said with a knowing wave of her hand.

Just then the phone rang and Gwennie answered it. She cupped her hand around the receiver and turned her back and spoke in whispered tones and then she hung up.

“Who was that?” her mother asked.

“It was Patsy Miller. She wants me to come over to her house. We need to study for a science test.”

“You’re not going out tonight.”

“You have to wash the dishes and I want you to vacuum the downstairs hall and there are about five loads of laundry to be done.”

“Am I the only one here that can do any work?” Gwennie asked. “I’m not a slave, you know.”

“That’s my final word. I’m still the mother here, no matter how crazy I am, and you have to do what I tell you to do. That’s the way things work.”

“I’ll help you with the housework, Gwennie,” Booger said.

Gwennie’s mother stood up and held out her arms. “And now, ladies and gentlemen,” she said, “for my final trick of the evening, I’m going to perform for you what I call ‘my disappearing act’.”

She crouched down under the table and crawled on her hands and knees out of the kitchen. A minute later they heard her walking upstairs.

“Do you think she crawled all the way up the stairs?” Booger asked.

“I think she likes being crazy,” Gwennie said. “She seems to be having a good time with it.”

“I’m going to have her committed,” Gwennie’s father said. “I can do it, you know, and she’ll have to stay away until she’s cured this time. It might take years.”

“Are you going to get a new wife, Daddy?” Booger asked.

“Help your sister wash the dishes and quit asking so many questions.”

After he left, Gwennie and Booger scraped the dishes into the garbage and cleared the table. Then Gwennie washed and Booger dried, and when they were finished Booger went into the other room to watch television and Gwennie left to go to Patsy Miller’s house.

She was halfway to Patsy’s house when she realized she forgot her science book, but it didn’t matter because studying for a science test was just a ruse anyway.

She was relieved to discover that Patsy’s parents were gone for the evening and she and Patsy had the house to themselves. They were in Patsy’s room reading excerpts from a pornographic novel and looking up the words they didn’t know in a dictionary and making a list of them, when Gwennie laid down the book and lit a cigarette.

“Can you blow smoke rings?” she asked Patsy.

She blew a few smoke rings for Patsy and Patsy tried it, less successfully than Gwennie, but she said she would work on it and blow a perfect one the next time they were together.

“My mother was blowing smoke rings at the dinner table,” Gwennie said.

“What for?” Patsy asked.

“Yes, but my mother is really crazy. She’s tried to kill herself three times.”

“That is pretty crazy.”

“My dad is going to have her committed.”

“Hey!” Patsy said. “I’ve got the key to the house next door. Let’s go over there and look around.”

The people next door were gone for a week and they were paying Patsy to keep an eye out for burglars, feed their cat, and water their plants. After Patsy fulfilled her obligations and the cat was sated and lying on the couch licking his paws, Patsy and Gwennie explored the house from top to bottom. They opened every door and every drawer. In the upstairs bedrooms they looked through the closets and the bureau drawers and they looked under the beds. They couldn’t have said what they were looking for, or why they were even looking. They stole a pack of cigarettes but except for that they left everything exactly as they had found it.

When Gwennie got home around ten o’clock, Booger was asleep in front of the television, her mother was locked in her room, and her father was gone and hadn’t returned yet. She drank a tiny amount of her father’s vodka, hating the taste but thinking it might help to make her sleep, and then she got into bed and turned off the light. Her last thought was that—if she was lucky—she would never wake up, or if she did wake up she would be somebody else.