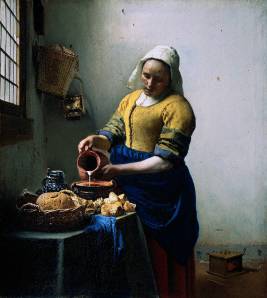 My wife, Pseudophia, had become increasingly unable to function. She stayed in her darkened room all the time, lying in bed and staring at the wall screen. If I ever shut it off, she became horribly agitated. At times she projected herself into what was happening in the pictures and if it was turned off she believed she was dead. The only two things in her life that had any meaning for her anymore were the drugs she was addicted to for her illness and the wall screen.

I needed help with taking care of Pseudophia and managing the cooking and household chores, so I took a two-year option on a female domestic robot. When the two years are up, I will either own the robot outright or I can send her back to where she came from. I considered getting a combination domestic model and pleasure model, but I settled for the domestic model only.

After the robot had been with us for about two weeks, I went into the kitchen one evening when she was washing the dinner dishes.

“That was a wonderful dinner, Sunny,” I said, coming up behind her and taking her by surprise.

She turned and smiled at me. “So glad you liked it, sir.”

“How do you like being with us?” I asked.

I couldn’t help noticing, as she reached above her head to put the plates away, that she looked the same as she had looked in the morning; her blue-and-white check dress appeared freshly laundered and she hadn’t a hair out of place.

“We prefer the term ‘human simulant’,” she said.

“Of course. When I was growing up, I was afraid of the domestic robots. I thought they were monsters. They didn’t look human then. We had one that seemed to be about eight feet tall. Any time it came near me, I ran and hid.”

“Robot technology has come a long way since then, sir,” she said.

“Do you mind if I touch your cheek?”

She held still as I ran the tips of my fingers along her cheek, down to her chin.

“Would you like to go for a little walk around the lake with me after you’re finished with the dishes?” I asked. “There’s a full moon tonight.”

“Now, you know I can’t do that, sir.” she said. “If I don’t get my full eight hours recharging my energy supply, I won’t be able to perform effectively tomorrow.”

“Of course,” I said. I turned away and began rearranging the fruit in the bowl on the table.

“I sense that you’re lonely, sir,” she said.

“No, it’s not that. I just wanted to talk to you about my wife.”

“What about your wife, sir?”

“What do you think about her condition? Do you think the situation is hopeless?”

I forgot for the moment that robots don’t think but only reflect the thoughts of the humans they live among.

“It’s not for me to say, sir,” she said. “Surely you’ve consulted with doctors. What do they say?”

“They say she has a rare degenerative disease that will become progressively worse until she dies.”

“I’m very sorry to hear that, sir. She’s so young and I can tell by looking at her that she was very beautiful before she became ill.”

“She used to be an excellent knife-thrower and she could walk up and down stairs on her hands. She had musical ability, too; she played show tunes on the musical saw.”

“You’re fortunate to have those memories of her, sir.”

I picked up an apple from the bowl and took a bite of it because I was feeling uncomfortable talking about Pseudophia the way she used to be and I didn’t know what else to do.

“Why don’t you go sit in your comfortable recline chair and I’ll bring you a drink that will relax you and help you to sleep?” Sunny said with a sympathetic smile.

I went into the other room and made myself comfortable, and in a few minutes she brought me a little glass of green liquid.

“What is it?” I asked as I took the glass from her.

“Just something I learned to make in school,” she said. “I don’t think you would have ever heard of it.”

I took a tiny taste of the green liquid and I immediately felt a warming sensation throughout my entire body.

She turned on some soothing music and straightened some objects on the desk and turned off all the lights in the room except for one and turned and faced me with her hands clasped in front of her.

“If there’s nothing else you require, sir, I believe I’ll retire for the evening,” she said.

I drank all the liquid in the glass and dozed for a while, listening to the music that was, I believe, a string quartet by Schubert. After a few minutes I stood up and, instead of going up the stairs to my own bedroom as I had planned to do, I went into Pseudophia’s room and closed the door quietly.

Black-and-white images flickered on the wall screen, affording just enough light in the room for me to see Pseudophia sprawled on her back on the bed. She was a terrible sight with her mouth open and her hair in wild disarray. Her eyes were wild and staring but unfocused, so I knew she didn’t see me and she knew nothing. It was becoming almost impossible for me to remember the person she had been.

I picked a pillow up from the bed and, without thinking about what I was about to do, put it over her face and leaned on it with both hands. She offered very little resistance—only a slight reflexive movement of the arms and legs—and soon I knew she was dead. When I pulled the pillow away from her face, she looked no different—the only difference was that she wasn’t breathing.

I awoke at about nine o’clock the next morning to the smell of food cooking. Feeling a stab of hunger, I got out of bed and put on my bathrobe and went downstairs.

Sunny was pouring a cup of tea for me when I went into the kitchen and sat down at the table and picked up the morning paper.

“Breakfast is nearly ready,” she said as she placed the cup of tea at my elbow with a smile.

I unfolded the paper, took a drink of the scalding tea and watched Sunny as she walked across the room. She looked radiant in a yellow pinafore with a white blouse and a yellow ribbon in her white-blonde hair. I couldn’t help noticing that her lips were very red and her cheeks looked flushed.

“You look like a ray of sunshine this morning,” I said as she set a plate of food before me.

“You’re too kind,” she said with a becoming blush.

“Yes,” she said. “Most restful. I was up early this morning, though. The undertaker’s assistants came and took away poor Pseudophia’s body before daylight.”

“I didn’t want to wake you. I took care of everything. They wanted your signature on a release form, but I signed your name for you. The man said he thought that would be all right. I hope I did the right thing.”

“If you have everything you need for the moment, sir, I’ll just go upstairs and tidy up.”

“What was in that drink you gave me last night?”

“Nothing special, sir. Just a drink.”

“That will be all for now,” I said with a grateful nod of my head.

“I think your life is going to be very happy and very bright from now on.”

I heard her footsteps on the stairs as I picked up the fork and began eating my breakfast.