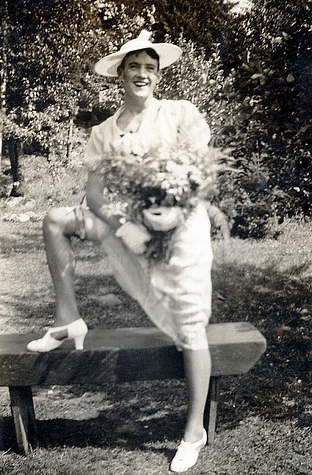 Little Thelma Kane and her mother, Nova Kane, presented themselves in the principal’s office.

Ima Chiclet, Mr. Middledyke’s secretary, eyed Nova Kane with contempt. “Do you have an appointment?” she asked.

“Well, then, you can’t see him without an appointment. He’s a very busy man.”

“What is the nature of your visit?”

“That’s none of your business. It’s for Mr. Middledyke to know.”

Ima Chiclet sighed and stuck the tip of her tongue out between her ruby-red lips. “I don’t think Mr. Middledyke will see you without knowing the reason.”

“Just tell him I need to see him on a personal matter.”

She stood up from her desk, went to a closed door behind the desk, tapped on it and went inside. In a moment she came back out.

“Mr. Middledyke says he’ll see you on one condition,” she said.

“That you’re not carrying a gun.”

Nova Kane held open the sides of her coat and whirled around. “No guns,” she said.

“How about you?” Ima Chiclet asked Little Thelma.

“If you’re both clean, then you may go right in.”

Mr. Middledyke was a small, dapper man with protruding ears and a thatch of sparse black hair on the top of his head. In his pinstriped suit, he looked like a junior-league gangster. He remained sitting at his desk and looked up from a crossword puzzle he was working.

“Consent for what?” he asked.

“For my daughter, Little Thelma Kane, to quit school.”

He put down his pencil and looked Little Thelma up and down. “Are you a student here?” he asked. “I don’t think I’ve ever seen you before.”

After Little Thelma and Nova Kane were seated in the soft high-backed chairs facing his desk, Mr. Middledyke laced his fingers together and smiled, showing his long, crooked teeth.

“Whenever anybody tells me they want to quit school,” he said, “it’s my job to try to talk them out of it. Have you considered the consequences of quitting school at your age?”

“Without a high school diploma, you will be hard-pressed to face life’s challenges.”

“Nobody will hire you, even to flip hamburgers, if you haven’t graduated from high school.”

“I don’t want to flip hamburgers,” she said.

“May I ask who it is that you intend to marry?”

“His name is Buster Foster,” she said. “You wouldn’t know him.”

“Is he a student in this school?”

“He used to go to school,” Little Thelma said.

“Uh-huh. And he’s got a good job, too, so I don’t need to worry about flipping hamburgers or anything else.”

“He works in a scrap metal place. People bring in stuff to sell and he weighs it and gives them the money for it.”

Mr. Middledyke turned to Nova Kane. “And you approve of this marriage?” he asked.

Nova Kane lifted one shoulder in a half-shrug. “It doesn’t much matter if I approve or not,” she said. “It needs to happen.”

“It’s a question of maternity, then?” Mr. Middledyke asked.

“There’ll be no bastard children in my family,” Nova Kane said.

Mr. Middledyke buzzed Ima Chiclet into his office and told her to get a parental consent form.

“Consent for what?” she asked.

“To drop out of school.”

Ima Chiclet looked from Little Thelma to Nova Kane and back again. “This young girl wants to quit school?” she asked.

“We haven’t got all day,” Nova Kane said, taking a cigarette out of her purse and fumbling it in her fingers.

While Little Thelma, Nova Kane and Mr. Middledyke were waiting in strained silence for Ima Chiclet to bring in the form, the fire alarms in the building went off, a shattering wall of sound foretelling doom.

Mr. Middledyke ran out of the room, as if he was the one on fire, leaving Nova Kane and Little Thelma sitting there in their bewilderment.

“We’re evacuating the building!” Ima Chiclet said. “Everybody out! Now!”

Little Thelma and Nova Kane pushed their way out of the building, along with everybody else trying to make it to the big double doors at the end of the long hallway. When they made it outside and to the car, Nova Kane gunned the engine and lurched away from the curb just as the fire trucks were pulling up.

“School is not usually so exciting,” Little Thelma said.

The next day the thing happened that told Little Thelma there was to be no baby. On her usual Saturday night date with Buster Foster, she told him the news.

“We don’t have to get married now,” she said.

“I thought you wanted to marry me,” he said, nearly in tears.

“Can’t we still go out together?”

“I don’t think so. I’m all finished with dating and men and things like that. You find you a nice lady about thirty.”

She wouldn’t have wanted her baby to die, but she was glad there was to be no baby in the first place and glad also that the fire at school kept Nova Kane from signing the form. She had had a narrow escape but things worked out just right for her, maybe for the first time in her life.

She wouldn’t squander her good luck. She would keep going to school if it hadn’t burned all the way to the ground and see it through to the end even if it killed her. And then? Morning would follow the night.