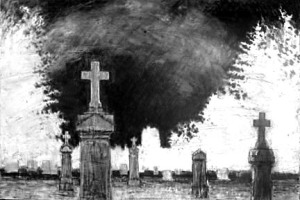 Damon was working overtime and wouldn’t be home for dinner. Wanting nothing herself, Helen made a chicken stew for Tom and Marilyn. After they were finished eating, they went outside to play baseball with the kids up the street, while Helen cleaned up in the kitchen.

When she was finished washing and putting away the dishes, she went into the living room and sat down on the sofa and began reading a book she had checked out from the library. She didn’t like the book very much and was having a hard time getting interested in it. She made a mental note to turn it back in and get a book that she knew she would like better.

She cast the book aside and lay back on the couch and rested her head on the cushion. She knew it was a perfect opportunity to take a short nap before Tom and Marilyn came home, but she was feeling restless. She hadn’t been out of the house or seen another person for four or five days, and she had the feeling that the walls were closing in on her. She needed some fresh air and a change of scenery. Since the weather was fine—it was one of the first warm days of spring—she would take a walk in the hills behind the house, something she hadn’t done all during the winter.

She was going to write a note for Tom and Marilyn, telling them where she was, but she decided it wasn’t necessary because she would be back long before they were. So, leaving a small lamp on in the living room, she went through the kitchen and out the back door across the yard to the alley. She walked down the alley until she came to a path that led sharply upwards into the woods. She knew a little shortcut; she would keep going until she came to the road and then take the road down to circle around and come back home.

Tom and Marilyn came home just after dark. The first thing they knew when they walked into the house was that no one was there. If their mother had been there, she would have been sitting on the sofa in the living room, reading a book or knitting. Marilyn looked on the kitchen table for a note, which is where a note would have been if there had been one, but the table was empty. Tom went across the street to Gladys King’s house where their mother sometimes went when she wanted somebody to talk to, but Gladys King hadn’t seen her all day, she said.

Marilyn began crying but Tom, being the older of the two, told her to just sit down and stop crying because he was sure Helen would be back soon. There had to be a good explanation for why she was gone and there was no reason to be a baby about it. He got out the cards and tried to get Marilyn to play a hand to help her to feel better, but neither of them could concentrate on the game and stopped playing after a few minutes.

After an hour or so of tense waiting, Tom told Marilyn to go wash her face and hands and get ready for bed, as he knew his mother would have done if she had been there. He told her he would fix her a hot dog while she was getting ready for bed, but she said she wasn’t hungry and didn’t want it.

When Damon came home from work, he knew right away that something was wrong. Marilyn was lying on the couch looking at the ceiling, her eyes puffy from crying. Tom was lying on the floor on his back, throwing a rubber ball up into the air with one hand and catching it with the other hand. They were both wearing their pajamas. Ordinarily they would have been in bed at such a late hour.

Tom told Damon calmly what had happened. He and Marilyn were outside playing after supper. When it became too dark to play any more and they came home, Helen wasn’t in the house. They looked for her and hadn’t been able to find her. They expected her to be back at any minute from wherever she was, but still, after all those hours, there was no sign of her.

Damon rubbed his chin and thought. He was a man of few words. He asked Tom if Helen had seemed all right, and Tom said she seemed all right to him and Marilyn concurred. Had there been any calls or any visitors? None that Tom was aware of. Had she said anything about needing to go anyplace, such as to the hospital to visit a sick relative? Tom had heard her say no such thing.

Damon sat quietly for a while and looked at a spot on the wall. He told Tom and Marilyn to go on and go to bed. When Helen came back, he would have her come in and wake them so they could see she was all right and didn’t need to worry.

After Tom and Marilyn were gone from the room and Damon was alone, he sat for a while in the silent house and then he got up and went into the kitchen and drank a shot of whiskey straight from the bottle. Then he took a flashlight and went outside and searched for any sign of Helen. He walked up one side of the street and down the other. He walked behind every house in the neighborhood, ignoring the dogs setting up a ruckus at the intrusion, and then he walked down the alley to the end, shining his light in all the dark places. When he came to the place where the alley ended at the steep incline going up into the hills, he stood there and shone his light all around. It seemed as if the grass was flattened there where somebody had recently walked on it, but he couldn’t be sure.

Finding no sign of Helen and seeing no neighbors who might have seen her or known of her whereabouts, he finally went home. He was terribly tired after working overtime hours, but he knew he wouldn’t be able to rest until he knew where Helen was. He sat down on the sofa and, barely moving all night, stared into the darkness, alert to any sound.

When morning came and there was still no sign of Helen, he stood up and went to the phone in the kitchen and called the police, stating flatly that his wife had been missing since early evening the night before. The officer he spoke to asked a few questions and he answered them, and when he finished the conversation and hung up, he sat down again to wait for what was going to happen next.

When the police arrived, they asked Damon many probing questions. It seems there’s an unwritten law that says when a wife is missing the husband is a prime suspect, but, after speaking to him for a while, the police were convinced he was telling the truth. The police then questioned Tom and Marilyn, since they were the last to see her before she disappeared. Tom told them what little he knew. No, he hadn’t seen anything unusual in his mother’s behavior. She seemed perfectly fine. Marilyn began crying loudly and asked if her mother was dead. The two police officers exchanged a look before they assured her that they would do everything in their power to find her.

Damon remembered that Helen sometimes liked to go walking in the hills behind the house when the weather was warm, but he had no reason to believe that’s where she went. The police said they would search there and let Damon know if they found anything of interest. Damon said that if they were going to search there, he was going to go along and search with them.

Tom and Marilyn reluctantly went on to school. Damon told them he would let them know as soon as he knew anything. He called his employer and told him he would not be in to work until further notice.

The searching went on in the woods behind the house for days, but nobody found any trace of Helen. The police canvassed the neighborhood, but nobody had seen anything the least bit suspicious; nobody recalled seeing Helen at all on the day she disappeared. Damon searched in the woods from first light to first dark for what seemed an endless succession of days, going over and over the same ground, and still he found nothing. The police began to suspect that the missing woman had been living a double life and had run off, intending that she not be found. Damon told them such a hypothesis was ridiculous; Helen would never walk off and leave her children.

After two weeks, the police called off the search because they were certain that Helen was not to be found. Even if she was dead, they would have found her body or some trace of it. In the unlikely event that she had been killed and eaten by wild animals, there would have been some trace that such a thing had happened. They sent her picture out all over the state and into the neighboring states, hoping that somebody somewhere would have seen her. A woman from the neighborhood propounded the theory that Helen was abducted by an alien spaceship from outer space and that the aliens would return her just as soon as they got tired of her.

After all other avenues had been explored, the police called in a psychic, an old woman who called herself Madame Farfalle. They took her to the woods where they had been searching and gave her a scarf that Helen had frequently worn. She held the scarf over her mouth and walked over a large portion of the ground, bobbing her head like a chicken and making low groaning noises in her throat. The officers accompanying her stood leaning on their car, smoking cigarettes and drinking coffee and trying not to laugh.

Madame Farfalle reported finally that she did, in fact, pick up psychic emanations from the missing woman but that she was lost to the world forever. She had slipped through one of the portals—extremely rare but not unknown—into a fourth or a fifth dimension. She could hear Helen, very faintly, calling out for someone to help her, but, of course, there was nothing that anybody could do. The police reported the results as inconclusive.

One year after Helen’s disappearance, Damon bought two side-by-side burial plots in the cemetery where his parents were buried. He had a headstone inscribed with Helen’s name, date of birth, and the date she disappeared, and had it erected over the grave on the right-hand side. The grave on the left-hand side was for him when the time came.

The years passed. Tom and Marilyn grew to adulthood and both married and had families of their own. They were able to put their mother’s disappearance behind them. They believed she died—or at least was lost to them forever—on the day she disappeared.

Damon, into his old age, never stopped believing that Helen would return. He never stopped watching, waiting, and listening for her. Every morning when he woke up, he said to himself maybe this will be the day. When he knew the end of his life was approaching, he embraced death more fervently than most because he believed that, in death, the question would finally be answered.