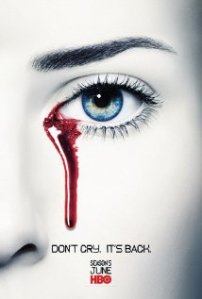 HBO’s Southern gothic vampire series, True Blood, is in its fifth season. Sookie Stackhouse, the Louisiana waitress, is still deeply involved with vampires, good and bad. The good vampires want to “mainstream” with humans, while the bad vampires want to enslave humans and use them as a source of food, by way of their blood. These two factions of vampires are frequently at odds with each other. The bad vampires—that is, members of the “Sanguinista” movement—are personified by one Russell Edgington, a vengeful, gay vampire thousands of years old. In the previous season, he made an impromptu appearance on a TV newscast, in which he ripped out the spine of the newscaster and vowed to “eat the children” of humans, after which he would eat everybody else. “And now time for the weather. Tiffany?” Good stuff.

Anybody familiar with the character of Sookie Stackhouse knows that she is no ordinary waitress. She is a “telepath” (she can read the thoughts of others) and a kind of fairy. It seems that vampires have long had an affinity with fairies and believed fairies to be extinct. Fairies taste and smell especially sweet to vampires and can, at times, enhance their power.

Since the beginning of the series, Sookie has had an on-again, off-again “relationship” with one Bill Compton, one of the good vampires, who has only been a vampire since the Civil War, a relatively short time. Vampire Bill is a soft-spoken Southern gentleman whose vampire nature is frequently at odds with his human nature and his desire to “mainstream” with humans. I can’t tell you how many times Sookie has been in deadly peril and Vampire Bill has come to her rescue. Any other vampire might have just killed her right off and been done with her, but not Vampire Bill.

Sookie has a handsome, dimwitted brother named Jason. He has a good heart but seems to lack judgment and, at times, good sense. He knows his own faults better than anybody and wants to live a better life but doesn’t seem to know how. He is waiting for somebody to show him the way. His libido seems to always lead him down the path of danger.

Sookie’s lifelong best friend is Tara Thornton, a black girl with an unhappy history and her own share of woes. Her latest travail is that she was shot in the head while trying to protect Sookie (it’s a long story) and, to keep her from dying, Sookie and Lafayette (Tara’s gay, restaurant cook cousin) enlist the aid of the sardonic girl vampire, Pam, to turn her into a vampire. It was either that or death. Tara is not happy about having been “turned” and will never forgive Sookie and Lafayette. She has always hated vampires and has had more than her share of scary experiences from her association with them. She’d rather be anything than a vampire.

There are other interesting characters, not the least of whom is Eric Northman, a perfectly formed Nordic type who was a “Viking” at the time he was turned into a vampire a thousand years ago. His “maker” was Godric, a good vampire, who immolated himself in sunlight on the roof of a hotel during one of the earlier seasons. He was over two thousand years old. Then there’s Jessica, the teen girl that Vampire Bill “turned” by orders from the vampire “magister.” Vampire Bill had to “turn” Jessica as a kind of penalty for one of the times he saved Sookie’s life. Jessica was a hellion of a girl vampire at first but seems to have calmed down a lot, thanks to the influence of her “maker,” Vampire Bill, and is mainstreaming with humans. She had a human boyfriend named Hoyt Fortenberry (who can’t seem to get out from under his mother’s influence), but they broke up. Sam Merlotte is the owner of the honky-tonk (roadhouse and bar) where Sookie works as a waitress. Sam is an all-around good guy and can usually be counted on to help out when trouble is brewing, but he is a “shape shifter” and has his own share of troubles, including a werewolf girlfriend and a trashy family. Arlene is a ditzy waitress at Merlotte’s with beet-red hair and an odd husband, Terry Bellefleur, who can’t seem to shake his wartime experiences. Andy Bellefleur is the sheriff and cousin of Terry Bellefleur. He is a recovering addict and a not-very-effective law enforcement officer, frequently bewildered by all the supernatural goings-on in the town.

True Blood is based on a series of novels by Charlaine Harris. While it is sometimes silly (as in the case of Sookie being more in love with Vampire Bill or with Eric Northman), it’s never boring. There are at least two dozen characters and most of them are interesting in their own way. The plot line is constantly shifting. If something is going on that you find not all that interesting, wait about two minutes and the story will shift to something else. With lots of sex scenes and lots of swearing and gore, it’s definitely not for everybody and not for the younger set. What it is, though, is inventive, surprising, suspenseful, well written and well acted. Those Southern accents are impeccable.