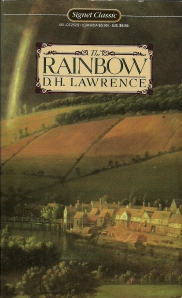 The Rainbow by D. H. Lawrence ~ A Capsule Book Review by Allen Kopp

When English writer D. H. Lawrence’s novel, The Rainbow, was first published in 1915, it was hailed as obscene and Lawrence himself was labeled a pornographer. The book was banned in many quarters while the righteous of the day took great pleasure in making a public display of burning it. It wasn’t available in England and the United States for many years after its publication, except in an “expurgated” version, meaning that somebody went through the book and took out the parts they considered “offensive.”

Readers nowadays will not understand what all the fuss was about when The Rainbow was first published nearly a hundred years ago. We live in a permissive age where any words might be spoken for public consumption; anything might be seen on TV or in movies or written about in magazines, newspapers and books. All the rules, all the taboos, seem to have been lifted, and nothing is sacred anymore. The Rainbow seems very mild by today’s standards. Lawrence only suggests that his characters engage in sexual activity. (He was, possibly, the first “mainstream” English writer to do this; thus all the furor.) His heroine in The Rainbow, Ursula Brangwen, sees her boyfriend (to whom she is engaged but doesn’t marry) naked while he is bathing, sleeps with him in his hotel room while pretending to be his wife, and has outdoor sex with him. There are no steamy details; the sex is only implied. This is no Peyton Place. Any of the words connected with sex are never used.

The Rainbow is a multi-generational story of a fictional English family, the Brangwens. It begins with Tom Brangwen, a gentleman farmer who marries a strangely detached Polish woman named Lydia. She is a widow, older than Tom, with a daughter from her previous marriage named Anna. When Anna is older, she marries her stepfather’s nephew, Will Brangwen. If Anna and Will have nothing else together, they have sexual compatibility; they end up having nine children, the oldest of whom is Ursula. She becomes the focal point of the second half of the novel.

As Ursula Brangwen becomes older, she longs to break free from the conventions and constraints that she believes have held women back for so long. She isn’t content to live as other women of her class have lived. She is a “modern” woman of the early twentieth century. She seeks a teaching career (with disastrous results), a college degree (she fails her final exams), and marriage (she decides she can’t go through with it) to a handsome young military man named Anton Skrebensky, a veteran of the Boer War. After The Rainbow ends, Ursula’s story is continued in the novel Women in Love, which was published in 1920.

Much of The Rainbow is taken up with the interior lives of its characters, meaning that we are constantly being told what they think and how they feel, rather than what they are doing or saying or what they are having for dinner. If this sounds like tedious reading, it isn’t. It isn’t a difficult book to read for those who are so inclined, although a little long at 515 pages.

D.H. Lawrence was plagued by ill health throughout much of his life and died at age 45 of tuberculosis in 1930. If he failed to achieve the acclaim and success that he deserved during his lifetime, he is today hailed as a giant of twentieth century English writing. The Rainbow is one of his most famous and enduring works.