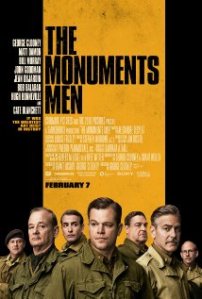 The Monuments Men ~ A Capsule Movie Review by Allen Kopp

In the final months of World War II, a small group of “art experts,” mostly middle-aged men who are as far from being soldier-like as you can get, are tasked with going into the midst of war in Europe and retrieving art masterpieces, mostly paintings but also sculptures, that the Nazis have plundered in their conquest of Europe. (Two pieces that play a prominent role in the movie are the Altarpiece of Ghent and Michelangelo’s Madonna and Child sculpture.) The idea is to make sure the art works are safe and return them to their rightful owners when the war is over and Hitler and Germany have been defeated. Hitler had other plans for the stolen plunder, however. After winning the war, he planned to build a “Fuehrer Museum” in his hometown of Linz, Austria, where the works would be displayed. It was all part of his plan for creating a “Thousand-Year Reich.”

The “art experts” (George Clooney, Matt Damon, Bill Murray, Jean Dujardin, Bob Balaban, John Goodman, Hugh Bonneville), labeled “the Monuments Men,” are museum curators, academics and architects. They get into some harrowing situations but remain jaunty and optimistic. They believe they are on a divine mission to save the culture of the world that Hitler wants to destroy, or at least steal. As is emphasized throughout the movie, when people are wiped out, they will return little by little, but when their heritage and their culture are gone, there is no way it can be restored. Cate Blanchette plays a French woman working for the Nazis in Paris who aids the Monuments Men by giving them detailed records she has kept of the stolen artworks.

The Monuments Men is based on a true story. It has an old-fashioned feel, aided greatly by the retro-sounding music score, and is definitely “light” entertainment. If you see it today, you’ll probably enjoy it but you might forget all about it by the end of the week.