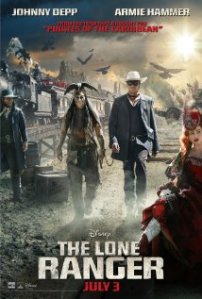 The Lone Ranger ~ A Capsule Movie Review by Allen Kopp

The Lone Ranger bears little resemblance to the 1950s TV series of the same name, except for The William Tell Overture. It has Armie Hammer (who played the upper-crust Winklevoss twins in The Social Network and J. Edgar Hoover’s gay love interest, Clyde Tolson, in J. Edgar) as John Reid, the Lone Ranger, and Johnny Depp as the laconic Comanche, Tonto, who, when he speaks, usually says something funny.

John Reid is a lawyer fresh from the East who goes West in the 1860s, after the Civil War. His brother, Dan, is a Texas Ranger and the only likely hero in the family. John Reid’s fate becomes entwined with the repulsive outlaw Butch Cavendish, who, on his way by train to be hanged, is freed by his gang of outlaws. Dan deputizes John Reid as a Texas Ranger. Dan’s wife, Rebecca, has always been in love with John, even though she married Dan. When Dan is killed in an ambush with Butch Cavendish’s gang, John Reid takes up the fight, with Tonto to aid him. We learn along the way that Tonto’s past is a sad one. He did something stupid and feckless when he was younger that resulted in his entire village being slaughtered. He has a lot to atone for. That’s why he’s so odd!

A subplot involves a corrupt railroad tycoon named Cole (played by Tom Wilkinson, the man who seemingly can play anything) who has plans to control, not only all the railroads in the West, but also all the silver. Cole has a hankerin’ for Rebecca. We discover that he and Butch Cavendish are brothers. What a nasty pair they are!

The Lone Ranger has plenty to recommend it, including lots of action on trains and some beautiful Western scenery in and around Monument Valley. Helena Bonham Carter has a funny bit as the madam of a brothel with a Western drawl and an artificial leg made out of ivory, with a built-in gun that she shoots out the bottom of her foot. (She has Butch Cavendish to thank for the loss of her leg.) Don’t try to pay too much attention to what is going on, because the story is muddled at times. Just empty your mind (for some that will be easy) and enjoy the ride. It is, after all, a summer movie. Thinking isn’t allowed in the summer, remember?

In the end, the white-hatted Lone Ranger (on his white horse, Silver) and Tonto ride off together, a couple of misfits. They complement each other because they are so different…or are they? One thing is certain: if this movie makes enough money, they are sure to be back in a sequel.