The Kid ~ A Capsule Book Review 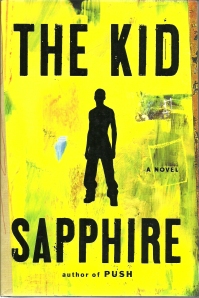 The Kid by Sapphire ~ A Capsule Book Review by Allen Kopp

We first met the character Precious Jones in the novel Push by Sapphire. It was made into an excellent movie in 2009 with the title Precious. (It seems that Push had already been used as a title for a different movie.) In the novel and the movie, Precious Jones is black, overweight and illiterate at the age of sixteen.  She has a foul-mouthed, welfare-recipient mother who regularly heaps abuse on her head and a father who routinely rapes her. By the age of sixteen, she has given birth to two children by her father, the first of which was a girl with Down’s syndrome called Mongo.

The second baby Precious gives birth to is a boy that she names Abdul. The novel The Kid begins when Abdul is nine. His mother, Precious Jones, has died at age twenty-seven of AIDS that she contracted from her own father. Abdul has no known family, so he becomes an orphan, a ward of the state. He is put into a foster home with an indifferent foster mother, where he is beaten and sexually assaulted by an older boy. After he recovers from his injuries, he is placed in St. Ailanthus, a Catholic boys’ school.

Abdul comes to regard St. Ailanthus as his home, even though he is sexually assaulted regularly by the “brothers” who run the home (it seems this is something he must tolerate just to get along). In spite of all that, though, there are benefits to living in the home: it’s clean and there’s plenty of food to eat; also there’s an education to be had for those willing to take advantage of it.

It’s while Abdul is at St. Ailanthus that he is exposed by accident one day to African dance. After that, becoming a dancer is the one driving force in his life. He intends to overcome all the obstacles put in his way to get the education and training he needs to become a professional dancer. His path is about to become more difficult, however: He is accused of sexually assaulting a younger boy at St. Ailanthus and is expelled. He believes he is being falsely accused so the brothers in charge of the home can somehow use him as a scapegoat to sidestep their own culpability.

After he leaves St. Ailanthus, he is sent to live with a great-grandmother that he didn’t even know he had. She lives in a filthy, roach-infested apartment and seems to not be in full possession of her faculties. She hasn’t seen Abdul since he was a baby. Abdul refuses to admit he is related to her.

Through all the ups and downs of his young life, Abdul never stops wanting to be a dancer. He lives for a while with an older, effeminate dance instructor. He finds himself in a dance troupe (of sorts) with an Asian girlfriend who calls herself My Lai; his feelings toward her seem to be ambiguous at best, especially after he finds out what she wants him to do for her.

The Kid is a fast, almost effortless reading experience. Those readers who read and liked the novel Push or saw the movie Precious will probably be interested in this story of young Abdul Jones’ troubled life. Although it held my interest throughout its 373 pages, I was a little disappointed in the rather unsatisfying ending. The book seems to just stop, rather than end, with Abdul at age twenty in another terrible jam that he may or may not be able to overcome. It seems another book is needed to tell us what happens to him from there on. Does he overcome all the bad stuff and become a successful dancer? Does he find someone who appreciates him for what he is without using him? These questions are yet to be answered.