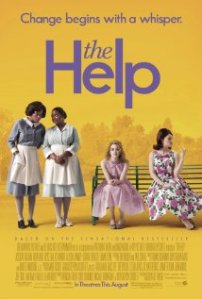 The Help ~ A Capsule Movie Review by Allen Kopp

The new movie The Help is set in Jackson, Mississippi, in the early 1960s. It is a story based on a novel about a group of women—white and black—and the social mores and code of conduct that define their lives. We are reminded once again about how different life is (or was) in the South than in other places.

Eugenia “Skeeter” Phelan (played by an actress named Emma Stone) is fresh out of college and wants to be a writer. Unlike most of the other girls of her social standing, she is interested in more than her appearance and in catching a husband. She gets a job on a Jackson newspaper writing a household-hints column, but she wants a lot more than that. She has grown up in a culture where black maids take care of well-to-do white families, specifically white kids. When she witnesses an incident involving the use of a toilet by a black maid in a white household, she decides she will write a book about the lives of the maids from their perspective, instead of from the white perspective. She will interview as many maids as she can and write their stories.

The maid named Aibileen Clark (played by Viola Davis, who was so good a couple of years ago in the movie Doubt) has a story to tell but is reluctant to tell it, afraid of the trouble it will cause. She makes ninety-five cents an hour and works six days a week, making about a hundred and eighty-seven dollars a month. She takes the bus early every morning into the high-class neighborhood where she works. Her mother and her grandmother before her were maids. She does all the household work and raises white kids as if they were her own, lavishing more attention on them than they get from their own parents.

Another maid is named Minnie (played by Octavia Spencer). She has a houseful of kids and a husband who beats her. She is outspoken and runs into some trouble with her silly white employer named Hilly Holbrook. Hilly is the leader of her social set and is about the worst of the white people in the movie. She’s not the kind of person you want as a friend; she’s spiteful, phony and snobbish. Minnie gets back at Hilly in a crude but funny way. When Hilly fires her, she goes to work for the unconventional Celia Foote, who wants to be—but isn’t quite—accepted by Hilly’s crowd. Celia has a slightly different slant on the way the domestic help should be treated.

The Help covers some familiar ground that we’ve seen before in other movies like The Long Walk Home, Fried Green Tomatoes, and The Secret Life of Bees, but it’s not a bad way to spend 137 minutes at the movies. Even if it is a little formulaic and predictable, it’s engaging and fun and has some fine acting by a mostly female cast. With all the mindless crap that’s out there now in movie theatres, you could do a lot worse. Remember, though, Minnie don’t burn no chicken, but I’d think twice about eating her chocolate pie.