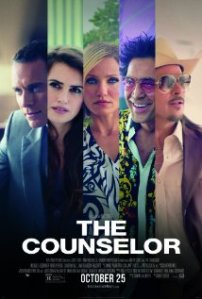 The Counselor ~ A Capsule Movie Review by Allen Kopp

American writer Cormac McCarthy won a Pulitzer Prize for Fiction for The Road. Another of his novels, No Country for Old Men, was adapted into a movie that won Best Picture honors for 2007 at the Oscars. As if those aren’t accolades enough, the 80-year-old writer has written the screenplay for the new movie, The Counselor.

Michael Fassbender plays the title role. He is never known by any name other than “counselor.” He lives in El Paso, Texas, near the Mexican border. He has a pretty girlfriend named Laura (Penelope Cruz), whom he wants to marry. He buys her an expensively ostentatious diamond engagement ring (she doesn’t want to know how much it’s worth). Because he has pressing financial needs (which are never explained), he decides to enter into the business of illegal drug trafficking, where he believes he can make huge sums of money. (He is warned about what he might be getting himself into, but doesn’t heed the warning.) He has a spiky-haired friend named Reiner (Javier Bardem) who lives lavishly from drug-trafficking proceeds. Reiner facilitates the drug deal that the counselor will take part in, and it turns out to be a huge one: twenty million dollars.

Reiner has a creepy girlfriend with a lopsided hairdo and tons of eye makeup named Malkina (Cameron Diaz). Reiner says at one point that all that women want is to be entertained. Malkina apparently wants more than that. She has her own private agenda and doesn’t know the meaning of the word loyalty. She prates on and on about how bad she is. At one point she goes to a Catholic priest to confess her sins, but when she tells the priest she isn’t Catholic, he tells her he can’t give her absolution. When she starts talking dirty to him, he leaves the confessional.

As expected, the drug deal doesn’t go well. The twenty-million-dollars worth of drugs are hijacked and stolen. The counselor, Reiner and another intermediary in the deal (Brad Pitt, with another unflattering hairdo) are all in deep trouble. The men who own the drugs (who we never see) are ruthless and unforgiving. They will not listen to excuses. They will only exact revenge and it won’t be pleasant. There is no way out for the counselor. The people to whom he turns for help are unwilling or unable to assist. He is told: You did this; now you must suffer the consequences.

The Counselor was directed by renowned director Ridley Scott, whose impressive list of credits, going back more than thirty years, includes Alien, Blade Runner, and Gladiator. With all the talent behind and in front of the camera, why isn’t it a better movie? While it’s very slick and pretty to look at, it’s talky and predictable. There are no surprises, other than the fact that the two hours running time seems like it will never end.