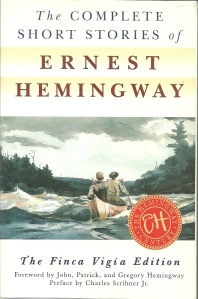 Ernest Hemingway is probably the best known and most identifiable American writer of the twentieth century. He is known almost as much for his adventurous life and for his travels as for his writing. He wrote about the manly pursuits of big-game hunting in Africa, bullfighting in Spain, and boxing wherever it happened to be. He was a newspaper reporter for the Kansas City Star, drove an ambulance as a young man on the Italian front in World War I (which formed the basis for his novel A Farewell to Arms), was among the “Lost Generation” of artists, writers and painters who expatriated to Paris between the World Wars, went to Spain to fight with the anti-fascist forces during the Spanish Civil War (leading to his novel For Whom the Bell Tolls), and served as a war correspondent on the European front in World War II.

Throughout most of his life, Hemingway suffered from the mental condition known as manic depression, which is now called bipolar disorder. He underwent electroshock therapy, which affected his memory and his ability to write. He died of a self-inflicted gunshot would in July 1961, a few days before his sixty-second birthday. He left behind a body of work that has stood the test of time. In addition to his dozens of short stories and nonfiction work, he wrote at least three novels (The Sun Also Rises, A Farewell to Arms, For Whom the Bell Tolls) that are considered among the best of the best of twentieth century American writing. His style of writing (terse, clean, straightforward, simple without being spare) has often been imitated but never equaled.

This summer I undertook the monumental task of reading all 650 pages of The Complete Short Stories of Ernest Hemingway. The book is divided into three sections. The first section is “The First Forty-Nine” stories that Hemingway wrote as a young man. It contains the most famous and well known of his stories and was published as a collection in 1938. The second section contains the stories that Hemingway published after 1938, and the third section is stories that, according to the preface, had never been published before.

The section of previously unpublished work contains some fragments of unpublished novels that (sort of) stand alone as short stories. The last selection in the collection is a forty-five page novel “fragment” called “The Strange Country” that later became Islands in the Stream, a novel that was published in the 1980s, long after Hemingway’s death. If it was anybody other than Hemingway, this meandering, rather pointless fragment probably would never have seen the light of day. It’s about a middle-aged man with several failed marriages to his credit on a road trip through Florida with a much-younger woman. They drive, they drink liquor, they talk a lot, they eat, they sleep, they have sex. Was Hemingway writing about himself? It seems a little self-indulgent.

The stories are apparently just in random order, rather than in the order in which Hemingway wrote them. The African stories (“The Snows of Kilimanjaro,” “The Short Happy Life of Francis Macomber,” “An African Story,” etc.) are interspersed with the bullfighting stories (“The Capital of the World,” “The Undefeated”) and the stories of the Spanish Civil War (“The Denunciation,” “The Butterfly and the Tank,” “Night Before Battle,” “Under the Ridge”). The two “Henry Morgan” stories later became incorporated into the novel To Have and Have Not. The “Nick Adams” stories, which Hemingway wrote early in his career, were inspired by summers he spent with his family in Michigan as a boy. The longest of the Nick Adams stories, at forty pages, is “The Last Good Country,” which, for some reason, was never completed. Of the “groups” of stories in the collection, I like the Nick Adams stories the best.

Some of the stories in The Complete Short Stories of Ernest Hemingway I had read, but most of them I was reading for the first time. I liked most of the stories and found them engaging and worth my time, although some of them are not really to my taste. I’m not a fan of either bullfighting or big-game hunting and cringe at some of the long passages about killing animals, but it is, after all, Hemingway, so he must be indulged in his passions. Nobody else demonstrates such a breadth of subject matter in a body of short stories. He is a master of the form. For a great reading experience, though, read either of the novels A Farewell to Arms or For Whom the Bell Tolls. Both of them are love stories in a war setting and are superb.