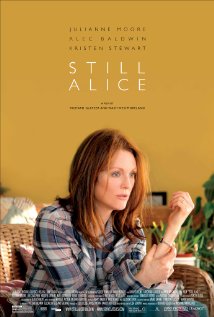 Still Alice is a weepy woman’s movie about a vibrant fifty-year-old woman who develops early-onset Alzheimer’s disease. Alice Howland (Julianne Moore, who will probably pick up an Oscar later this month for this role) has a fantasy life. She is a linguistics professor, something of an expert in her field who values communication above everything else. She has a successful marriage to a doctor (Alec Baldwin) and three perfect, grown children (an actress, a doctor and, you guessed it, a lawyer) who are just as dazzling and successful in their own right as their parents. In the middle of all this perfection, Alice begins to realize she has something wrong with her. She begins to forget the names of objects. She says the same things over and over and doesn’t remember appointments. Her husband is put out with her that she “blew their dinner plans.” She wets her pants because she can’t remember where the bathroom is in her own house. When she seeks the help of a neurologist, he discovers that she has a rare form of Alzheimer’s disease that is genetic (familial) and that strikes its victims at an early age. Perhaps the worst thing about Alice’s disease is that she will most certainly pass it on to her brilliant children.

Still Alice is stuff we’ve seen before. It’s like a TV movie, one of those disease-of-the-week things. What purpose does it serve? (I suppose the answer to that is that it makes money for its investors.) The victims are always brilliant: poets, doctors, lawyers, professors, scientists. (We are told that a person with a higher level of education loses “it” faster than a person who only went to high school.) Wouldn’t it be just as tragic if the victim was a factory worker or an elementary school teacher? A mail carrier or a clerk in a department store? Maybe we never see the victim as an “average” person because it just isn’t as tragic, or as much fun, to watch the unsophisticated and uneducated degenerate right before our eyes. They just don’t have as much to lose.