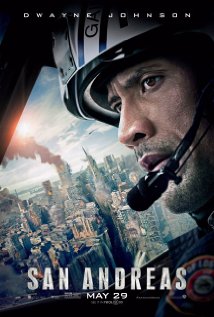 Disasters have long been a staple of the movies. Whether it’s a sinking ship, a crippled airplane, an earthquake, a burning skyscraper, a zombie attack, a hurricane, tornado or any other type of weather occurrence, there’s always plenty of drama inherent in the situation. And what would a disaster be if it didn’t serve as backdrop to a “personal story?” There’s always a hero whose loved ones are in danger and who must, against seemingly insurmountable odds, save them from horrific death. In the case of San Andreas, the hero is a man named Ray (Dwayne Johnson). With his bulging muscles, bravery and ingenuity, he rescues people in his helicopter, and this is before the huge earthquake that almost literally rips California in half.

Ray has a pretty wife (Carla Gugino) named Emma and a college-age daughter named Blake. Ray’s wife is divorcing him because they’ve drifted apart after the death of a second daughter. Ray receives the divorce papers in the mail about the same time he realizes that his soon-to-be ex-wife has a new boyfriend she seems to be serious about. He obviously still loves her, but he will take it all in stride like the stalwart fellow he is.

In a subplot, a Cal-Tech professor named Lawrence (Paul Giamatti), who is also a seismology expert, just happens to be on top of Hoover Dam when the shaking earth causes the dam to crumble. Lawrence barely escapes with his life (a colleague is killed) and hurries back to his office to warn everybody that the event at Hoover Dam is but a precursor to the terribly devastating earthquake that is coming. Will Californians listen to him, or are they too caught up in their own selfish pursuits?

When the earthquake hits in earnest, Los Angeles is destroyed, but, hold on, the worst is yet to be. Ray’s daughter is in San Francisco. When she is able to communicate to him that she is all right, he tells her he will come and get her in his helicopter (immediately after rescuing his wife from a crumbling building in Los Angeles). When Ray and his wife are on the way to San Francisco to get their daughter, however, he runs into trouble around Bakersfield with his helicopter and crashes. He is able to commandeer a truck but the highway is impassable where the earth has opened up. What will Ray do now? Has he exhausted all his options to rescue his daughter? Don’t believe it for a minute.

When Ray and his wife finally get to San Francisco, they witness the destruction of that city. Familiar buildings and landmarks, including the Golden Gate Bridge, become piles of rubble. Never mind that, though; where is his daughter?

San Andreas abounds with disaster-movie clichés. There are crumbling buildings, objects falling on people, an old couple embracing as they realize they are about to die, a child in peril who is pulled out the way of disaster just at the last second, improbable rescues, and on and on. It’s a formulaic disaster movie we’ve seen many times before, but that doesn’t mean it’s a waste of time. There’s still something very satisfying about sitting safely in an air conditioned movie theatre watching attractive people fight their way through improbable situations that we, if we’re lucky, will never, ever have to face ourselves.