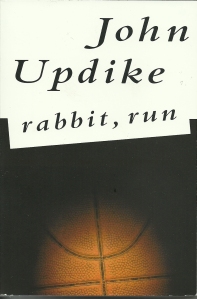 Rabbit, Run, published in 1960, is the first in a series of four novels by John Updike with the same set of characters. The other novels in the series are Rabbit Redux (1971), Rabbit is Rich (1979), and Rabbit at Rest (1992). The four novels together are a landmark in contemporary American literature. Rabbit is Rich and Rabbit at Rest were awarded Pulitzer Prizes for fiction for the years in which they were published.

In Rabbit, Run we are introduced to one Harry “Rabbit” Angstrom. In high school he was an accomplished and much-admired athlete, but by the time we meet him at age twenty-six he has fallen from the lofty heights he once occupied. His “career” consists of demonstrating a kitchen gadget in a dime store, and he is locked in an unhappy marriage with a woman named Janice, who he knew and courted in high school. Harry and Janice live in a cramped upstairs apartment.  Janice spends her days boozing and watching television. She is possibly even more emotionally immature than Harry is. Harry doesn’t like her very much; he thinks of her as “dumb.” They have one child, a boy named Nelson, and Janice is expecting another child.

Harry is still used to the adulation he received in his younger days and has trouble adjusting to his reduced circumstances. He seems to be constantly reliving and longing for the glorious days of his athletic youth. The one person he seems to have any emotional connection with is his old coach, a broken-down old boozer named Marty Tothero. Harry turns to Marty Tothero for advice and guidance, failing to see that Marty is probably the last person in the world who is likely to be of any help. During a night out with Marty and Marty’s girlfriend, Margaret, Harry meets Ruth, a woman who is not unlike Janice. Harry tells himself and others that he has left Janice, so he is ready to take up with this other woman, Ruth, a former prostitute. Ruth isn’t very nice to Harry and doesn’t seem to like him very much but, for some reason, Harry seeks refuge with her. He begins living with her, while pregnant Janice is left alone on the other side of town to fend for herself.

When Rabbit befriends one Reverend Eccles, his life is further complicated by his attraction to Eccles’ strange wife. Eccles tries to see the good in Harry and has, as is subtly suggested, a same-sex attraction for Harry, which is never acted upon and never overtly stated.

When Janice has the baby she is expecting, a girl named Rebecca, Harry returns briefly to the fold. He and Janice still aren’t able to get along, in spite of the new baby that should bind them together even closer, and he leaves her again. While is he reunited with Ruth, Janice, drunk as usual, accidentally drowns baby Rebecca in her bathwater.  In light of this tragedy, Harry tries to make another go of it with Janice, but he knows it is never going to work out and “runs” again. He discovers when he returns to Ruth that she is expecting his baby, which is not surprising since he would never allow her to use birth control.

John Updike’s prose is a little overblown at times for my taste, but Rabbit, Run is a great reading experience. While Rabbit Angstrom and the cast of supporting characters might not always be likeable, they are always interesting and believable. There’s not a false note or a phony moment in the entire book; considering the less-than-attractive subject matter, that is an amazing feat. In the hands of a less gifted writer, Rabbit, Run could have been just like an afternoon daytime drama on TV.