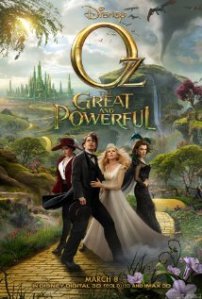 Oz the Great and Powerful takes place before The Wizard of Oz, so there’s no Dorothy or Toto, no Cowardly Lion, Tin Man, or Scarecrow. There are, however, a Wizard, flying monkeys, the Emerald City, Winkie Guards, Wicked Witches (yes, more than one), singing Munchkins, a hot-air balloon, a cyclone, and a land as beautiful as heaven must be where just about anything might happen.

The story begins in Kansas in 1905 in a carnival. (The first fifteen minutes or so of the movie are in glorious black and white, on a narrow little screen to look the way movies used to look before there was such a thing as wide-screen format.) Oscar Diggs (played by James Franco) is a not-very-convincing carnival magician. It seems he has a penchant for the ladies and finds himself in some trouble when he tries to romance the strong man’s wife. With the strong man in pursuit, he jumps into a waiting hot-air balloon to get away. A fierce storm is brewing just at that time, so the balloon, with Oscar in it, is swept away to parts unknown. Oscar thinks he is going to die, but he finds himself in the magical Land of Oz where everything is different from what he’s used to and where everything is not as it appears. (At this point the screen expands to its usual enormous size and the black and white becomes color.) Right away he discovers that the people of Oz believe he is the long-awaited Wizard that will save them from evil. (Is there a Christ parallel here, or is that just my imagination?)

Oscar learns that when he becomes Wizard, a huge storehouse of gold and treasure will become his. The catch is that he must kill the Wicked Witch to become Wizard, or at least destroy her wand, which will render her powerless. He doesn’t know how he is going to kill the witch, but at least he doesn’t have to do it alone; he has Glinda the Good Witch to help him (who believes in him when he hardly believes in himself), along with Little China Girl (whose legs he glues back on) and a sympathetic flying monkey named Findley. From then on, the story is about the struggle between good and evil.

Oz the Great and Powerful is, according to the credits, based on the works of L. Frank Baum and not on the 1939 The Wizard of Oz, which is, apparently, all tied up with copyrights, including the ruby slippers that Dorothy wears and the wart on the Wicked Witch’s chin. In 3D, it’s expensive-looking and that’s because it’s expensive (two hundred million dollars). The filmmakers have given the Land of Oz depth and dimension and have made it a beautiful place to visit, unless, of course, you are an old crab, don’t like going to the movies at all, and would rather stay at home and watch TV.

With the Wizard installed on the throne as the Wizard of Oz and the Wicked Witch effectively out of the picture (at least for the time being), the Wizard should be expecting a visit any day from a certain Dorothy Gale and a few of her unusual acquaintances.