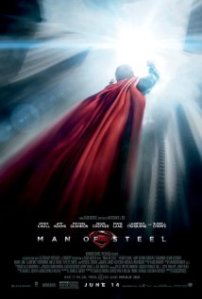 Man of Steel ~ A Capsule Movie Review By Allen Kopp

I’m not a fan of big-budget summer movies, especially if they’re based on comic books. Superman has been around for a long time and has been told any number of ways. How many Superman movies and TV shows have there been? Don’t people ever get tired of the same old stuff? Well, I guess the idea behind a new Superman movie is to tell it in a different way, make it fresh, give people something they haven’t seen before. That, I suppose, is the aim of Man of Steel.

Man of Steel gives us the lowdown on how Superman came to be Superman. (The “S” that he wears on his chest is only an “S” on earth; on the planet Krypton, where he comes from, it is a symbol of hope.) When the man who becomes Superman is an infant, the planet Krypton is dying. His father, a brilliant scientist (Russell Crowe), devises a method to send his infant son out into space to another planet in a kind of rocket ship. Where does the rocket ship bearing the child land? It lands on earth, of course. A Kansas farm couple (Kevin Costner and Diane Lane) find the baby and raise him as their own son, knowing he is “special” but making sure the world doesn’t know it until the right time.

In Man of Steel, Superman (played here by Henry Cavill) is a Christ-like figure. More than one reference is made to his “coming to earth to save mankind.” At one point he is referred to as the “living embodiment” of a higher intelligence. He is 33 years old, the age Christ was when He was crucified. Even the poster for the movie seems to suggest ascension into heaven. I’m not sure if the Christ parallels are accidental or deliberate, but I have a feeling the filmmakers knew what they were doing. In one scene, Superman (as Clark Kent) goes to a church and speaks to a minister. While he is talking, a stained-glass window bearing the image of Christ is in the background. (We don’t very often see Christian imagery in mainstream movies.) Also, the villain in the movie, one General Zod (played by the ever-creepy Michael Shannon), is a very good characterization of Satan. He wants to turn earth into a new Krypton, which would, of course, kill all earth people. In one scene toward the end of the movie, he admits he will do anything to achieve his ends, even if he must use violence and cruelty. While Superman is “good” (siding with humans), General Zod is all bad, but only doing what he believes he was created to do. He and Superman must battle each other to the finish.

Amy Adams plays Lois Lane, the spunky girl reporter who works for The Daily Planet. She’s an independent gal who can hold her own with the men and who doesn’t mind using a few naughty words when the occasion calls for it. She is, of course, Superman’s love interest. When the movie ends, Superman has taken a job (as Clark Kent) as a reporter on The Daily Planet to try to “blend in” with humans. He is wearing a pair of horn-rimmed glasses, so, of course, Lois Lane and the others don’t recognize him as Superman. Doesn’t the dimple in his chin give them any clue? How long will it be before they catch on? Probably not until the sequel comes out and maybe not even then.