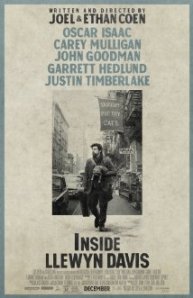 Inside Llewyn Davis ~ A Capsule Movie Review by Allen Kopp

From the creative genius of Joel and Ethan Coen comes Inside Llewyn Davis, a story about a down-on-his-heels folk singer in New York’s Greenwich Village in 1961. Oscar Isaac (who I’ve seen in other movies, usually a villain) plays Llewyn Davis, who, despite his obvious talent as a singer, is in no way a “success.” (He was part of a singing duo but his singing partner committed suicide by jumping off the George Washington Bridge.) He doesn’t have a winter coat in the freezing New York winter, but a coat is not his most pressing need. He doesn’t even have a home, so he sleeps on the couches of “friends” until they get tired of him and kick him out. He is irresponsible and, in fact, hardly seems to be able to get along at all, especially in a profession that has as high a rate of failure as his does. A sort of girlfriend  named Jean, who he may or may not have impregnated, tells him he’s “King Midas’s idiot brother.”

He does, in fact, seem hapless in everything he does. He has a  misadventure with a cat belonging to an acquaintance on whose couch he spends the night. He loses the cat, of course, and picks up a cat on the street a day or two later that he thinks is the cat but in fact turns out to be a different cat (a female). He argues with his sister, who tells him she doesn’t want him in her house. He takes verbal abuse from Jean, while making plans to abort the baby she’s carrying that might be his, but, then again, probably isn’t. On the way to Chicago to see about a job, he ends up in a car with the strange Roland Turner (played by John Goodman), a dope addict who can’t walk without the use of canes, and Turner’s “valet,” named Johnny Five (Garrett Hedland), a Jack Kerouac-like character. The job in Chicago doesn’t work out, so he hitches a ride back to New York with a New Jersey boy who hasn’t had any sleep. (I’m not sure what the animal is that he accidentally runs over in the car at night, and I’m not sure what it means, but I found that episode a little unsettling.)

Inside Llewyn Davis has to be one of the most interesting and original movies of the year, told in the inimitable Coen style. (Nobody else even comes close.) I was glad that the cat, named Ulysses, makes it back home (no thanks to Llewyn), but I was sorry for the other cat that Llewyn had to leave behind. Let’s hope that everything turned out well for her.