I, Frankenstein ~ A Capsule Movie Review 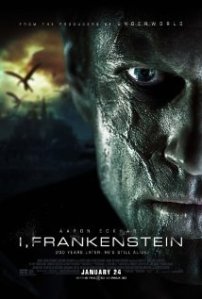 I, Frankenstein ~ A Capsule Movie Review by Allen Kopp

In I, Frankenstein, Frankenstein’s Monster, known here as Adam, is a pawn in the ongoing war between demons from hell and a race of beings known as the Gargoyles. The Gargoyles are “good,” having their origins in the Bible, and are fighting to protect the human race. The demons want to get possession of Adam (the story is set two hundred years after he was created) because he is the only one of his kind, assembled from body parts of cadavers and given life by the “mad scientist” Victor Frankenstein. The demons can learn from studying Adam—and also from the two-hundred-year-old notes of Victor Frankenstein—how to reanimate dead tissue. They have been collecting ten of thousands of dead bodies. When the time is right and they learn what they need to know from Adam, they can reanimate the dead bodies and instill them with demons from hell. The demons in their vast numbers will then be powerful enough to take over the world and enslave or kill all humans. The Gargoyles, of course, are trying to protect Adam and keep him from the demons.

The demon faction is personified by one Niberius who, when he takes human form, calls himself Charles Wessex (played by bill Nighy). He is supposedly a legitimate businessman trying to find the secret of reanimating dead tissue for the good of mankind. The people who work for him don’t even know what he’s up to. He has been storing dead bodies for a long time and will command the legions of demons when the time comes. Frankenstein’s Monster, Adam (played by forty-five-year-old Aaron Eckhart), is nothing like Boris Karloff’s flat-headed, bolt-necked, stiff-legged monster. He is a romantic hero with a toned body and a cleft in his chin. (Of course, there’s the obligatory scene where he strips down.) He wears blue jeans and a duster and looks almost normal except for the stitches that sew his various body parts together. When he befriends a pretty, young female doctor who works for Niberius, romantic sparks fly, even though he has no soul and is a monster created in the eighteenth century. Do they never learn?

I, Frankenstein is based on a graphic novel, with all that implies. It’s long on visuals and action and short on subtlety or character development. It’s entertaining, though, and fun to watch in 3D. Its expensive production values, intelligent script, and “name” actors elevate it way past the “schlock” class.