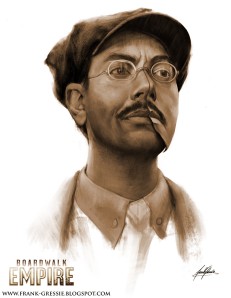 Boardwalk Empire on HBO is the best show on television. Of course, I might be a little prejudiced in that opinion because it’s the only show I watch. It just completed its fourth season, I’ve seen every episode, and I think it’s better than ever. It’s involving, beautifully written and beautifully played. The characters are well-rounded and believable. For the most part they are not “good” people, but human. We understand their jealousy, greed, hatred, desire, revenge, love, or whatever it is that motivates them. We don’t want to be like them (could any of us get away with it?), but we love watching them, including their killing without remorse. How bad can a person be? Apparently there’s no limit.

And then there’s the “look” of the show. Obviously a lot of research has gone into getting each detail historically accurate for the period. Each scene is beautifully appointed and you wonder how they can create those fabulous sets, some of which are just seen for a few seconds. (Is it all computer-generated illusion?) The music is all from the period and there’s lots of it and it always fits the scene. So, even if you don’t like the story, it’s a feast for the eyes and ears, especially if you, like me, find the 1920s fascinating.

There were some interesting developments in season four. Gillian Darmody, that youthful grandmother, is addicted to heroin. The new man in her life, Roy Phillips (who isn’t what he appears to be), helps her kick the habit. She is fighting for custody of her grandson, Tommy, when a very bad thing that she has done in one of the earlier seasons catches up with her. Nucky finds a new love interest, Sally Wheet, whom he meets in Florida when he is there on “business.” His wife, Margaret, has receded into the background with her two children and just plays a minimal part in season four. Nucky’s nephew, Will, kills a fellow student in college when a prank goes too far. When Will is caught, Nucky uses his considerable influence to get him off. Will doesn’t want to go to school but wants to be a gangster like his father and his uncle. A new character, Dr. Narcisse, has a beautiful young singing protégé named Daughter Maitland. Dr. Narcisse is also a man who isn’t what he appears to be. He and Chalky White are rivals. Chalky, who has a wife and two children, has an affair with Daughter Maitland, intensifying the dislike between the two men.

Among those who meet their ends in season four are Mr. Purnsley, Maybelle White, Agent Knox, Dean O’Banion, Frank Capone, and a host of minor characters. Eddie Kessler, Nucky’s faithful valet, commits suicide when he is bullied by two federal agents into giving an insignificant confession against Nucky. So long, Eddie!

And then there’s Richard Harrow. From the first time he appears in season one in what was supposed to be a minor role, he dominates every scene he’s in with his quiet dignity. After we see him a couple of times, we see beneath the tin mask he wears that hides his horribly disfigured face. He has lived through the horrors of war and returns to a world in which he has no place. For a while he is a hired killer but that isn’t really who he is. He wants nothing more than to have a family and to be normal. When he dies at the end of season four, it’s for love. Not for romantic love—that would be too silly—but for a more profound kind of love. As he’s dying, he sees himself with his handsome face intact, returning “home” to those who love him. A tragic hero in the end. Does TV get any better than this?