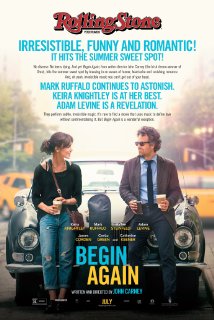 Gretta (Keira Knightley) is an English girl, a singer/songwriter who is going along for the ride with her handsome, successful pop singer boyfriend named Dave Kohl (Adam Levine). Dave has girls crawling all over him and—guess what?—he’s unfaithful to Gretta with an Asian girl named Mim. Gretta slaps the you-know-what out of Dave (he deserves it) and leaves. She is staying with a platonic male friend when she is coerced into singing a composition of her own in a New York club. A frizzy-headed, unkempt, down-on-his-luck recording executive named Dan (Mark Ruffalo) just happens to be present in the club the night Gretta performs. He desperately needs a successful artist that he can promote to his boss and he sees in Gretta the raw talent that nobody else can see or appreciate. The best scene in the movie is when Gretta is singing her song (about being alone in the city) with just a guitar and Dan is visualizing an arrangement with other instruments. He “sees” the piano being played, although there is nobody playing it, along with double base, violin, cello and other instruments.

When Dan meets Gretta, he has just been fired from his job for a five-year run without discovering a successful recording artist. And his personal life is no better than his professional one. He lives in a dark, depressing apartment; he is estranged from his wife (Catherine Keener); his fourteen-year-old daughter goes to school dressed like a whore. He talks Gretta into recording an album of her songs and, since they don’t have the money for a recording studio and musicians, they will record at various locations around New York City with musicians who are willing to work for free.

You might expect a romance to develop between Dan and Gretta, even though he is a lot older than she is, but that isn’t where this story is going. He gives her confidence in her musical talents and she gives his professional career a much-needed boost, but we don’t have to see them smacking their lips together and rolling around together in bed. (Thank goodness!) You have to hand it to the creators of this film for eschewing the customary romantic sparks.

Begin Again is a pleasant, lightweight movie that won’t give you a headache unless you already have one. There’s lots of music in this movie, some of it good and some of it on the annoying side. I like Keira Knightley’s singing voice and screen persona. She has appeared in costume dramas (Anna Karenina and Pride and Prejudice) and more contemporary fare (Never Let Me Go and Seeking a Friend for the End of the World). I hope she never gets her teeth fixed because it’s natural not to have perfect teeth. There are too many unnatural-looking, perfect teeth in the world.