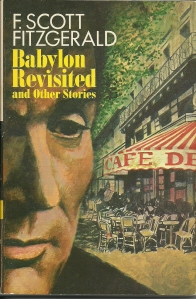 More than any other American writer, F. Scott Fitzgerald chronicled the age he lived in, especially the 1920s. He coined the term “Jazz Age.” If you want to know what it was like to live in the twenties, with its good times, easy money, Ivy Leaguers, extravagance, sexual freedom and booze in spite of Prohibition, read the writings of F. Scott Fitzgerald. In his relatively short time on earth (44 years), he wrote four completed novels—one of which, The Great Gatsby, is among the three or four greatest American novels of the twentieth century—and dozens of short stories, which were mostly written for magazines.

Babylon Revisited and Other Stories is a collection of ten of F. Scott Fitzgerald’s short stories. Some of the stories in the collection are much longer than conventional short stories, which should run about 5,000 words or less. If a story is much longer than that, I think it technically qualifies as a novella. This collection runs over 250 pages. With ten stories, that’s an average of 25 pages per story. One story in the collection, May Day, is 50 pages. I think the shorter stories are better plotted and more memorable.

The best and most famous story in the collection is, of course, the story for which the collection is named, Babylon Revisited. It was written in 1931 and is about a man, Charlie Wales, who has passed through the 1920s but not unscathed. He is a reformed (or trying to reform) heavy drinker who used to spend money freely when he had it. He had an unhappy marriage to a woman named Helen. Charlie and Helen had a daughter, named Honoria, who is nine years old when the story takes place. Helen has died of “heart trouble” and Honoria lives with her aunt (Helen’s sister, Marion) and Marion’s husband, Lincoln, in Paris, since Charlie is seen as too irresponsible to care for her and give her a proper home. Now that Charlie has a steady job and has his drinking habit under control, he wants to take Honoria back and have her live with him. He must, of course, prevail upon snooty Marion, who doesn’t like him, to give up Honoria. This isn’t going to be easy since Marion has legal custody of Honoria and still sees Charlie as an irresponsible drunkard. When he just about has Marion convinced to give up Honoria, his past catches up with him in the form of two drunken profligates he used to associate with, reawakening Marion’s doubts about him.

Other memorable stories in the collection are The Ice Palace, about a girl from the warm, sunny South who wants (or thinks she wants) to marry a boy from the cold North. When a frightening episode occurs when she’s visiting her boyfriend’s home in the icy North, she calls off the marriage.

A Diamond as Big as the Ritz is the not-so-happy story about the richest man in the world who owns a mountain that is in reality a diamond. He and his eccentric family live in splendor, apart from the rest of the world. When his son takes a classmate from boarding school home with him for vacation, the visiting boy comes to know this family first-hand. What he discovers about them isn’t pretty.

Absolution is about a “beautiful” eleven-year-old boy who comes from a strict Catholic family. He is confused about his religion and believes his sins are much graver than they really are. When he confesses to an old priest—the priest is struck by the “beauty” of the boy’s eyes—he finds the priest is just as confused as he is and isn’t capable of offering him any comfort.

The Freshest Boy is about a boy named Basil Lee who is attends a fancy boys’ prep school. His family can barely afford to send him there and he is very unhappy because he is so unpopular and disliked by the other boys. It seems that everything he does makes him even more hated. On a trip to New York to see a show, however, he has a revelation about his life. When he has a chance to leave prep school forever and live in Europe with his mother, he decides not to take it.

The shortest story (five pages) in the collection is The Long Way Out. It’s about a woman who has had a nervous breakdown and is a patient in a mental hospital. She is waiting for her husband to come and take her on a trip, but he has been killed in an accident on his way there. The nurses don’t want to tell the woman her husband is dead, so every day they tell her he has been delayed one day but will be there the next day. The woman believes that the arrival of her husband is just one day away. Always one day.

Babylon Revisited and Other Stories is a good sampling of F. Scott Fitzgerald’s short fiction. It gives the reader a sense of what he was about as a writer. There are many more stories to be had for those who are interested in delving further and, of course, there’s always The Great Gatsby, which, as a novel, is about as good as it gets.