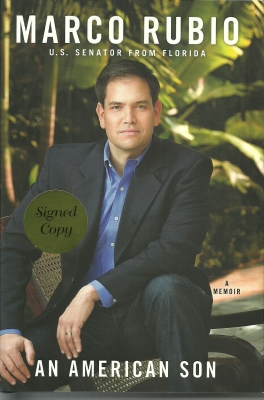 An American Son ~ A Capsule Book Review by Allen Kopp

Marco Rubio was born in Miami in 1971. His parents came to the United States from Cuba during the 1950s, in search of a better life for themselves and their children. They had no formal education and job skills that would only ever allow them to work in menial jobs, but they were determined that their four children would have better lives than they had had. They survived as Americans without exactly thriving and saw their son Marco become an attorney, a family man with four children of his own, and a successful and powerful politician.

An American Son is Marco Rubio’s story, from his modest upbringing in Miami to his hard-fought election in 2010 as Florida’s junior senator. He began in Florida politics when he was elected to the West Miami City Commission. From there he went to the Florida House or Representatives, where he was eventually elected speaker of the house. When his term of office ended there, he considered leaving politics for good and concentrating on his law practice, but the opportunity came up for him to run for the United States Senate. At a time when nobody believed he could win, he challenged a powerful and popular sitting governor, Charlie Crist, for the nomination of his party to run in the general election. Defying the odds and also conventional wisdom (not to mention a barrage of vicious personal attacks), he won the nomination of his party and went on to the win the general election in a three-way race. It’s a story of perseverance, of not giving up in the face of overwhelming odds.

Too often politicians in Washington, with their $1500 suits and their luxury vacations, come across as elitist and out of touch. Marco Rubio might prove over time to be a different kind of politician. He wasn’t born into a privileged environment. He has lived in the real world and he knows what it’s like to struggle. He comes across as a decent man, maybe overly ambitious but not overly egotistical. He’s not perfect, he makes mistakes, and he’s figuring out the way as he goes along the same as everybody else.

An American Son is breezy reading, never ponderous or bogged down in unnecessary detail. I found the whole book interesting but especially the second half where Marco details his up-and-down campaign for the Senate where he was attacked daily by the opposition. Some politicians have the job dropped into their laps because of what their names are, while others have to work for it, night and day, over months and sometimes years. It’s not an easy road and it takes a certain kind of person to want to do it. Somebody with plenty of drive and ambition but also with the conviction he can make a difference in the world.